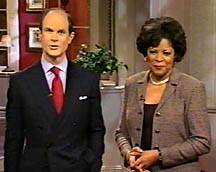 The new “Wall $treet Week” team, with Colvin and Gibbs out front, were right to expand the show beyond Rukeyser’s format, says our critic, but haven’t perfected their act.

It’s 8:30 p.m. Eastern time on CNBC, and four chimes are sounded. A series of images follow: George Washington in front of the New York Stock Exchange, the Statue of Liberty, the bronze bull in perpetual snarl at the tip of Manhattan.

A few remote-control clicks away, four eerily similar chimes can be heard at the same time on PBS, ushering in a different flurry of stock footage. These images are less “top-down”: businessmen and businesswomen collaborating around a conference table and a spinning globe that morphs into the eye of a woman looking at her computer screen, as if to remind us of the hallucinatory effects of staring too long at stock charts.

These two leading business programs — Louis Rukeyser’s Wall Street (the one with George Washington), and Wall $treet Week with Fortune (the one with the spinning globe) are as interrelated as inflation and interest rates. Each was born of Maryland Public Television’s March 2002 decision to push its Wall $treet Week in a new direction, emphasizing youth and journalism.

Rukeyser pushed back. He refused to soldier on in the diminished role as senior correspondent, and MPT fired him after he criticized them on the air. CNBC offered him a platform at a different address while agreeing to distribute the new program to PBS stations for free rebroadcast after midnight Friday.

This left the Maryland program with a world of possibilities, but a dearth of gravitas. MPT’s calculation was that it could make up for the loss of the wise man of Wall Street by adding an entire magazine—one of the best established, and just plain best, business publications, Fortune.

The personification of the magazine is one of its editors, Geoff Colvin, now a co-host of the new program. Though a television newcomer, Colvin shows no evidence of callowness, which is testimony to his producers’ skills as much as his own. He has an authoritative voice (good pipes run in the family—his sister is pop singer Shawn Colvin), a knack for the well-timed question and wit (with lines like “investors expect a war with a faster resolution than a plot twist on ER”). Colvin, like CNBC’s Ron Insana, proves that financial news is the one area of network anchoring where late-stage male pattern baldness is permitted.

Perhaps hired in what traders call a “hedge,” Colvin’s co-anchor Karen Gibbs is an experienced television financial news reporter. She brings with her all the evidence that she’s been doing network news for years, including a dependence on cliché the likes of which haven’t been seen since the cows came home.

Each week, after Colvin kicks off the program, Gibbs recaps the market’s week, and the show moves on to a series of panel interviews, interspersed with often-clever bits of market insight and occasional produced pieces. Here’s a typical rundown, seen March 7:

12:00: Colvin leads a discussion on investors’ recourse against unethical brokers. Guests are a lawyer who represents investors, the general counsel for the securities industry trade group, and anti-greed crusader Arianna Huffington.

Some producers would have tightened up the panels by eliminating one of the two investor advocates, though Huffington and Theodore Eppenstein contributed unique takes, incendiary and temperate, respectively. They didn’t seem redundant because the show—unlike the typical cable shout-fest—gave them enough time for an in-depth discussion. The producers also put some panelists to work asking questions that the hosts fail to pursue. While Colvin reveals plenty of opinion in his parallel life at Fortune (he wrote “The Great CEO Pay Heist,” for example), the producers cast him and Gibbs as moderators rather than inquisitors.

The reluctance to ask pointed questions for fear of being, or being seen as, partisan is a particular vice of public broadcasting in America. BBC journalists show no such hesitation. Wall $treet Week suffers from this, as it relies on guests to ask the pointed questions.

The timidity could be seen in a Gibbs interview Jan. 24. To their credit, Wall $treet Week producers had assembled a timely panel including a tax-cut advocate who had just attended the president’s conference on tax cuts, plus two economists, one favoring the tax cut and one opposed. Gibbs relied entirely on Larry Mishel of the Economic Policy Institute to point out flaws in the plan. With two opponents, he was so busy making the case that cuts wouldn’t lead to economic stimulation that nobody raised the question of who would get the bulk of the tax savings. Gibbs should have recognized this and asked a question along the lines of, “Is it fair for the wealthiest 1 percent of the county to receive over a third of the savings under this plan?” She could have used the “critics allege” or “it’s been pointed out” locution but should have raised the issue somehow.

Gibbs is the program’s weakest element. She gives us wise nods and meaningless smiles that seem to have no connection to the topics at hand. When Larry Jackson, of Smithville, Mo., writes in and asks if there’s conflict of interest in awarding Iraq reconstruction contracts to Halliburton, Vice President Dick Cheney’s former company, Gibbs acknowledges that “critics” have cited the “appearance of favoritism.” But she goes on to note, “Halliburton’s stock has had quite a run the past six months!” and dismisses the issue by saying, “if we excluded from the process all U.S. companies whose former employees are now in government service, we’d be left with the French. Mon Dieu!”

That crashing sound heard from Missouri is Mr. Jackson throwing his television set across the room.

The producers have successfully reshaped Wall $treet Week to appeal to a younger and less expert audience than Rukeyser’s. The pacing is good, Colvin displays wit, and topics are chosen for relevance to the general news consumers who are curious about investing, as opposed to Rukeyser’s apparent target viewers, who are already heavily invested and prowling for stock tips.

Despite the updates, Wall $treet Week is not a cable news hype-fest replete with frothing stock pickers and confusing business babble. The graphics, for instance, are usually quite instructive, much better than those on the financial cable channels, which swirl and undulate as if choreographed by Twyla Tharp. The exception is the gimmicky Morningstar Style Index, a nine-part, color-coded graphic that’s far too complex to be grasped in a few seconds on screen.

Rukeyser on his new CNBC show.

Because the new Wall $treet Week was created specifically to expand upon the territory staked out by Rukeyser, it’s not fair to compare it with Rukeyser’s new show. You can’t critique Rukeyser’s produced pieces, stylized graphics or interviews on political topics, because he doesn’t offer those things. Louis Rukeyser’s Wall Street has three segments: his monologue, a panel of experts who pick stocks, and an expert questioned by Rukeyser and the panel. Rukeyser’s March 7 show went like this (times approximate):

6:00 minutes: Rukeyser opines into the camera.

Rukeyser is calming and often insightful, and his jokes are the kind that would provoke a smile among old friends, but watching him speak to the camera for six minutes, interrupted only by a market chart, pushes the limits of viewer patience. The commentary has elements of both Colvin’s broad take and Gibbs’s market-specific recap, but his assurance on March 7 that bull markets “climb a world of worry” carried more force than Gibbs’s assertion that “we’re in for a bumpy ride.” However, Rukeyser did not even mention the resignation of high-profile investment banker Frank Quattrone, which Colvin used as the peg for his excellent segment on investor recourse.

On March 7, when it was impossible to ignore the effects of the looming war on the economy, ISI Group political analyst Tom Gallagher was an excellent guest to discuss the topic. Rukeyser’s panel inevitably includes heavy hitters, some of whom are boycotting the PBS show to stick with the man who put them on the air for decades. An occasional panelist may have been born in the second half of the last century, but Rukeyser and the others exhibit no outward signs of contempt.

This isn’t groundbreaking TV, but it does offer an impressive display of Wall Street prowess. These stock pickers are very good at what they do. At the beginning of the year each of Rukeyser’s 22 panelists picked a basket of stocks, with some bonds and commodities mixed in. So far, 15 of the 22 are beating the Wilshire 5000, recognized to be the broadest index of the market. Only five trail the Dow. To put this in perspective, surveys and statistics have continually demonstrated that two-thirds of stock pickers and fund managers do worse than the market as a whole, but among Rukeyser’s group two-thirds do better. This means that Rukeyser is very good at picking stock pickers.

In a perfect world, both shows would have a place on public TV, and they do. More than 150 public TV stations have picked up Rukeyser’s show. But the rift over his departure has caused pain. Neither program’s audience is up to the levels Rukeyser was getting on PBS. Both programs had to scramble for underwriting dollars in a down advertising climate and Maryland Public Television was forced to lay off employees.

Still, for all the bad blood and growing pains, it must be said that MPT made the right decision. It was time to expand the scope of public TV’s signature weekly business show beyond what Rukeyser was willing to offer. And Rukeyser—for the education he’s imparted to several generations of investors—deserved better than a pink slip.

If these shows were stocks, Wall $treet Week with Fortune (ticker symbol WSWF) would be the high-tech start-up and Louis Rukeyser’s Wall Street (LOU) would be the steady blue-chip, a recommended holding for widows and orphans.

As investors (of time), viewers may want to choose between the two. What are their particular information needs—expert stock-picking or a broader look at financial issues? Right now, Rukeyser’s bottom line is stronger, his show achieves its goals, but those goals are much more modest than his competitor’s. Wall $treet Week with Fortune has more upside potential, but it needs to address fundamental problems, including Gibbs’s style (and using the hackneyed dollar sign instead of an “S” in its title). If changes don’t happen, it will never equal the consistency and stature achieved by the competition.

Mike Pesca covered business journalism, among other topics, as producer-at-large for NPR’s On the Media. He is now the editor of JAQK, a forthcoming magazine about risk and reward.