Julia Child’s kitchen is now in the nation’s attic, the Smithsonian Institution’s history museum on the Mall, inserted into a miscellaneous area behind the north escalators on the first floor, past the artificial heart, Bakelite radios and Carol Burnett’s charwoman costume. 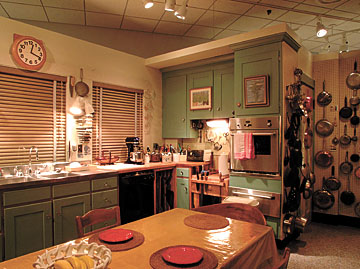 Straightforward like Child herself, the TV cook’s kitchen is now on display at the history museum on the Mall in Washington, D.C.

Visitors last week intently watched excerpts from her many pubTV cooking shows compiled for the 2000 pledge special Julia Child’s Kitchen Wisdom. (At one point she advises people to eat the green stuff in lobsters, which she claims is just delicious.) Last fall Smithsonian curators crated up her big, rectangular kitchen in her former home in Cambridge, Mass. They meticulously reassembled it at the museum behind clear plastic shields, complete with pans on pegboards, countertops raised 2 inches for the 6-foot tall cook, and the pipe along the ceiling where TV crews hung lights.

“I wish I could come in and turn everything on — it looks exactly right,” Child said at the opening of the exhibit Aug. 19, according to the Washington Post. She clipped apron strings to open the exhibit, which will remain through February 2004.

Child, who is living in a retirement community in Santa Barbara, was on the East Coast to celebrate her 90th birthday Aug. 15.

“You stand at the entrance to that kitchen and you expect to see Julia coming out of the pantry,” says Geoff Drummond, who produced several of her more recent series in that kitchen and appears in snapshots pinned to the refrigerator door with magnets. He noticed the coffee machine by the sink. “Julia would say, ‘Hi, dearie, want some coffee?’ And then she’d say, ‘Why don’t you make some?'”

She worked in the kitchen more than 40 years, since 1961, the year her first big cookbook was published and a year before The French Chef began on public TV.

Captions on the Smithsonian installation treat Child as a historic figure who invited Americans “to return to the kitchen” and “come out of their postwar insularity.”