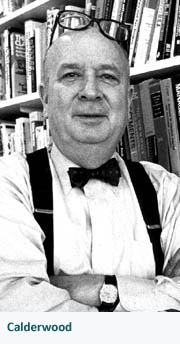 Stanford Calderwood, who served only a few months as president of WGBH, Boston, but initiated one of its most enduring franchises, Masterpiece Theatre, died May 9 [2002]. He was 81.

Calderwood brought together costume dramas from British TV producers with a long-term underwriter, Mobil Corp.—a formula that defines the series today, more than three decades after it went on the air in January 1971. He served in World War II before entering journalism and becoming a marketing exec for Polaroid Corp., based in Cambridge, Mass.

After putting Polaroid money behind Julia Child and other WGBH projects, he succeeded Hartford Gunn as president of the station. At least a couple other executives took credit for inspiring Masterpiece Theatre, which followed public TV’s great success of importing the BBC’s The Forsyte Saga. Calderwood left WGBH after less than six months when a controversy over bad language (he opposed it) erupted at the station. He moved into finance, eventually controlling Trinity Investment Management according to the London Times. He and his wife, Norma Jean, an Islamic scholar, became major arts philanthropists. She survives him.