Coming to the end of a long and happy journey at WGBH, I’ve been thinking about television and its place and what we’ve done, what there is to do. One thing that I’ve seen in 30 years is a part of the story that was contained in Commanding Heights but wasn’t specifically told: the part about television moving from a regulated business with an obligation to serve the public to a largely unregulated, for-profit business with very little public service obligation left.

The marketplace has become the arbiter of television in America, by and large. Not for the better, I think. Television has invaded and hugely reshaped America’s use of leisure time. It has been reshaped as a passive entertainment in which even the darkest realities of American life are repackaged as amusements.

Maybe that is okay. The purpose of work is to earn man the necessaries of life and leisure for the rest, leisure for his free choice of pleasures. That people wish to be entertained at the end of a long, hard day is understandable. That that entertainment is supported by and created for and only survives if it carries the messages of the marketplace is how our free-market system works. And that the commercial networks have become minor subsidiaries of big corporations and that the evolving world of cable is headed in the same direction are the natural consequences of the workings of that same system. 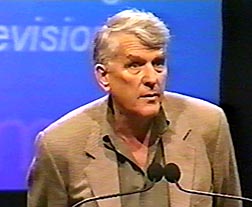 But our place — your place, my place, the place of public television — is to offer an alternative to that, to serve the actual young and the forever young, the open and curious, those who still want to learn. And that is what I take the Ralph Lowell Award to recognize: approval of my work and of your work — of all our work.