Seventy stations are trying pilots of From the Top, an hourlong weekly showcase of teenaged classical musicians that Public Radio International will distribute for broadcast starting in January.

Seventy stations have shown interest in the series by airing pilots, and 97 have already signed up to carry the show — “far above any classical program launch” — more
than two months before its debut, according to PRI spokeswoman Eleanor Harris.

The Charivari Quartet from Portland, Ore., performs for From the Top.

Under the direction of producer Tom Voegeli, they’ve taped programs at the Interlochen and Tanglewood music schools; last weekend they were working at Carnegie-Mellon University in Pittsburgh; and sessions are set up for Boston’s Symphony Hall on March 4, the Kennedy Center on March 23, and Carnegie Hall on April 11, says spokeswoman Erika Salloux.

Each program features five extraordinary pre-college musicians, sought out through music schools and youth orchestras, auditioned on tape, and flown in for tapings. (Winners of the Music Teachers National Association competition will be invited automatically. Slavet reports.) Host Chris O’Riley, a young concert pianist, introduces them (“Let’s take it from the top when you’re ready”) and interviews them between sets (a flutist admits making up the music when she got lost once — “It was modern, so
it wasn’t that big of a deal”), plays a musical-knowledge game with them and often provides piano accompaniment.

Guest professional musicians also perform with the kids (Judy Collins guested for the episode taped at the Public Radio Program Directors Conference in September). And the show winds up with an audience vote for their favorite performer.

The series came about when the two executive producers, Jennifer Hurley-Wales
and Gerald Slavet, were exploring uses for Jordan Hall, newly renovated by Boston’s New England Conservatory of Music. She worked there in development; he is an entrepreneur and trustee of the conservatory.

Slavet recalls that after a disappointing visit with a potential partner, Hurley-Wales said, “We need an old-fashioned radio show,” and he said, “It should focus on kids.” 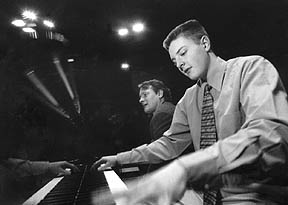 The idea of young musicians came naturally to Slavet. He had become involved with the conservatory through his daughter’s musical work, and he had begun arranging international tours and preparing compact discs for the conservatory’s Youth Philharmonic Orchestra. He wanted to remove the intimidation factor in classical music so that more kids and adults could enjoy it.

“We wanted to make heroes of kids who play music,” says Slavet, “but also have a show that would be interesting to the most sophisticated listener, and equally interesting to the adult or the fourth-grader who had not listened to classical music.”

The kids are appealing to all kinds of people because of the way they talk about music. “When they explain what it means to them, they’re talking from their hearts.”

Serious music types have objected to the Amazing Audience-Choice Award competition that concludes each program, which ends with the audience selecting a “favorite” young performer, but the producers are keeping the feature. “It’s there as a hook,” says Slavet. “We seem as a nation to have lost the art of active listening — you can’t pick your favorite
in the show if you don’t listen. And it’s also a way to get the audience to stay tuned to the end.” The winner doesn’t get riches — just a kazoo and a trophy for their schools. “We’re not saying, ‘This is the kid who should get the scholarship.’ We’re just saying, ‘Have an opinion, just like you do about the movies’.”

But the producers took other pieces of advice from stations airing the pilots, says Slavet. They dropped jazz performances, for instance, after hearing objections from classical-format stations.

The project gets about 80 percent of its funding from a U.S. Department of Education grant. PRI, WGBH and the conservatory also provided early funding, and the producers will seek corporate underwriting. Additional parts of the project include pilots for a possible public TV series, a large website with chats and all kinds of resources for young musicians, and online music curriculum developed with the New England Conservatory and Educational Development Center, New York.