Marlon Riggs, who died in 1994, produced and directed the film Tongues Untied, which aired in July 1991 on the PBS series POV, and a number of other films. He also taught at the University of California, Berkeley. 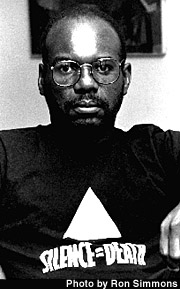 The vice squad of American culture was once again on the attack. After being rebuffed in their attempts to ban the homoerotic images of Robert Mapplethorpe and then the Todd Haynes film Poison, and after suffering embarrassing defeat in the “anti-obscenity” court case against the black rap group 2 Live Crew, America’s self-appointed media watchdogs regrouped and found another, seemingly perfect target: my experimental documentary, Tongues Untied, which unabashedly celebrates the struggles, lives and loves of black gay men in America.

Tongues Untied was motivated by a singular imperative: to shatter America’s brutalizing silence around matters of sexual and racial difference. Yet despite a concerted smear and censorship campaign, perhaps even because of it, this work achieved its aim. The 55-minute video documents a nationwide community of voices — some quietly poetic, some undeniably raw and angry — which together challenge society’s most deeply entrenched myths about what it means to be black, gay, a man, and above all, human.

Tongues Untied has achieved international acclaim: from the Berlin, London and New York Documentary Film Festivals, the National Black Programming Consortium and the Black Filmmakers Hall of Fame, as well as the Whitney Museum and the Los Angeles Film Critics Association.

This, of course, did not mean a hill of beans to white arch-conservatives and religious fundamentalists, who pointedly minimized or ignored altogether the abundant evidence affirming Tongues Untied‘s artistic and social merit.

Among these would-be guardians of American culture, sexuality as such remains taboo. Black heterosexuality is shrouded by even deeper layers of silence and aversion. And black homosexuality, the triple taboo, equates in their minds with an unspeakable obscenity.

Predictably, the morals censors pounced on both PBS and the National Endowment for the Arts in an ongoing effort to force American culture into line with their rigid, narrow notions of morally correct art. In their rhetorical equivalent to hate-filled fag-bashing, the morality watchdogs smeared and disfigured Tongues Untied beyond recognition. An editorial in the arch-conservative Washington Times suggested in all seriousness that the PBS broadcast of my work was tantamount to disseminating raw homosexual “pornography,” transforming the households of America into a “gay striptease joint”!

Equally predictable in this so-called “obscenity” controversy was the collusion — by silence — of mainstream black America in this nakedly homophobic and covertly
racial assault. Black heterosexuals (many of whom consider themselves “progressive” or even “Afrocentric revolutionaries”) passively, silently acquiesced as political bedmates with the likes of Rev. Wildmon, James Kilpatrick and the rabidly anti-gay, race-baiting Sen. Jesse Helms.

Suddenly, traditional conceptions of America’s Left, Right and Center prove bankrupt. The general desire to suppress any realistic acknowledgment or exploration of homosexuality in America has spawned the ultimate postmodern coalition!

Sandwiched uncomfortably amidst this improbable collection of censorship co-conspirators was a dismaying number of U.S. public television executives. The broadcasters, most of whom had the sense not to object to homosexuality per se,
nonetheless cited the “offensive language” of Tongues Untied and its affront to “community standards” as justification for banning the work or scheduling it in the wee hours of the night.

The question such broadcasters never asked, because the answers are too revealing, is: Whose community and whose standards are they upholding?

Implicit in the much overworked rhetoric about “community standards” is the assumption of one privileged community (mythically patriarchal, heterosexist and usually white) and one overarching culture (ditto) which a station’s programming must never deeply affront.

Tongues Untied’s frank, nonconformist imagery and language thus lent themselves
as easy targets for station censorship. Ripped completely out of context, words like
“fuck” or images of two black men tenderly embracing and even my own highly diffused, silhouetted nudity, were repeatedly characterized as unjustifiably “indecent,” “graphic,” even “obscene.” Such rhetoric clearly attempted to circumvent the need to examine the fears, biases and profound gaps of ignorance that shape many PTV broadcasters’ myopic, monocultural notions of “community values” and “prevailing standards.”

But there was also another purpose behind the “obscenity” rhetoric: the charge of being too “graphic” or “grossly offensive” offered the perfect pretext for silencing a disfranchised minority’s attempt to end its subjugation and challenge the cultural terms of the majority’s social control. Having deemed the language of black gay men unsuitable for public broadcast, tongues untied were peremptorily re-tied. The suppression of the culturally (and politically) disempowered thus continued in many American communities without compunction. How utterly convenient!

That this dynamic has shaped the cultural distortion and outright erasure of many groups throughout American history — African, Native, Asian and Latin Americans,
working-class communities, women as well as homosexuals — wholly escapes most who objected to the “language” and “confrontational” imagery of Tongues Untied.

“We are uninvited guests in people’s homes,” one station executive in Detroit typically explained. “We have to be careful about what we put on the air so as not to alienate and offend our community.” On this basis, public television offers little if any distinction from its commercial counterpart.

Like most of mainstream American media, it serves merely to consolidate the myths, power and authority of the majority: “minorities” might be granted the right to speak and be heard, but only if we abide by the “master codes” of courteous speech, proper subject matter, conventional aesthetics and “mainstream” appeal. Disobey this often unquestioned rule and you risk banishment into cultural oblivion.

Paradoxically, the Tongues Untied censorship hysteria has helped rekindle an essential public debate: who is to have access to so-called “public” media, and on what terms? Who should represent and define “minority” perspectives and experience? Above all, who has the authority to draw the thin line between innocuous “diversity” and unacceptable “deviance?”

James Baldwin, renowned black American homosexual novelist and essayist, once wrote that the general aim of white Americans was to refashion the Negro face after their own, and failing that, to make the black face “blank.” Straight America, black well as white, has demanded much the same of homosexual men and women: to win majority acceptance, we are asked to represent ourselves in ways which, in effect, reaffirm the majority’s self-image of privilege. The alternative is our wholesale erasure.

But there is another alternative, and for many this was the real outrage of Tongues
Untied, and for many, many more, its principal virtue: the refusal to present an
historically disparaged community on bended knee, begging courteously for tidbits of mainstream tolerance. What Tongues instead unapologetically affirms and delivers is a frank, uncensored, uncompromising articulation of an autonomously defined self and social identity. SNAP!