After 17 years in blissful obscurity, the Loud family is about to be put back into the public television fish bowl. 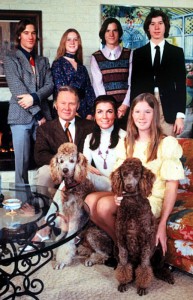 WNET-TV in New York will rebroadcast on New Year’s Eve and New Year’s Day An American Family, the 1973 cinema verite production that followed the lives of Bill and Pat Loud of Santa Barbara, Calif., and their five children: Michele, Delilah, Grant, Kevin and Lance.

“I’m amused,” said Lance Loud, who now lives in Los Angeles. “It’s no big deal. We have nothing to sell or promote because of it,” he said, adding that he has not seen the 12-hour documentary since its original broadcast on public television.

The film created a stir by documenting the troubles of one American family, bringing to hundreds of thousands of living rooms scenes of Bill and Pat Loud’s crumbling marriage and Lance’s evolving decision to declare openly he was gay.

“It’s been called the most expensive home movie ever made,” said Alan Raymond of the New York-based Video Verite production company. Alan and Susan Raymond filmed the original documentary for WNET and produced a follow-up HBO film in 1983, marking the program’s 10th anniversary.

Viewers are “now looking at it with hindsight,” Raymond said. “It was shocking then, but now we take it for granted, certainly the whole treatment of homosexuality.” The film “predated confessional talk shows. It predated camcorders, allowing us all to do long-take recording of our lives,” he said.

“I think a lot of the criticism leveled at the family was cruel,” Raymond said. “Very few could stand up to that scrutiny. The divorce wasn’t so shocking. What was unusual was that they did it on camera,” he said.

WNET decided to rebroadcast An American Family to kick off the Year of the Family and highlight the public TV series Making Sense of the Sixties, said Harry Chancey Jr., director of WNET’s Broadcast Center. “An American Family was filmed on the heels of the 1960s. It was part of the ’60s culture,” he said.

The members of the Loud family reacted differently to the pending re-broadcast, Raymond said. Pat and younger sons Grant and Kevin are “very distraught,” he said. Lance is pleased, while Bill and daughters Michelle and Delilah “don’t care one way or another,” he added.

The series “seems to have had a traumatic effect” on Pat Loud, Raymond said. “If she had the chance to do it again, she would not do it,” he said.

Pat lives in England, according to son Lance. Lance and his brother Grant live in Los Angeles; Delilah and Michelle live in New York and Bill Loud and Kevin live in Houston, he said.

WNET agreed to produce a 10th anniversary follow-up to the series in 1983, but “pulled the plug on it halfway through” because of financial problems, Raymond said. HBO stepped in and offered the program.

WNET officials excluded An American Family from screenings marking the station’s 25th anniversary, Raymond said. “They’ve always had a difficult time with the series. They have a love/hate relationship with it,” he said.

Raymond’s comment is a “conjectural thing,” Chancey said. Before deciding to air An American Family, he said he placed “two key phone calls” to former WNET President Jay Iselin and former Broadcast Center director Bob Kotlowitz. “Both felt it was an absolutely superb idea,” he added.

“Institutions do change. This is a 20-year old issue,” Chancey added. “If you say anything at all, you say the program outlived its early history where there may have been bad blood. There’s no bad blood now. It’s an archival resource,” he said.

An American Family will be distributed nationally as a Public Broadcasting Service Encore presentation. Twelve stations have so far purchased rights to air the program, said Michael Patterson, manager of PBS Encore and Custom Program Services. PBS will distribute the series in two six-hour blocks on Dec. 22 and 29 [1990].

Another verite family saga, An American Love Story, airs on PBS in 1999. Earlier feature on the documentary, 1994.

After Lance Loud’s death, a third family documentary was planned.

Longitudinal docs: Rich and rare: docs such as 49-Up that unfold over decades, 2007.