How did advertising-driven broadcasting establish itself as the dominant user of the airwaves in America? 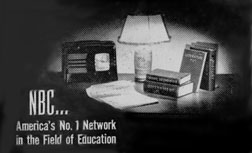 That was still NBC’s claim in a 1945 advertisement aimed at educators and still plugging the NBC University of the Air.

A crucial episode occurred in the 1930s when commercial broadcasters argued successfully that they would put education on the air, and educators should stick to their books.

1. The doctrine of ‘Cooperation’ won early battles of ideas

2. It would have been a boost for public radio — but the report fizzled

4. The Cooperation era: Alliance with broadcasters puts education on the air

This paper by Eugene E. Leach, Ph.D., was originally serialized in Current during January, February and March 1983 under the title, “Snookered 50 Years Ago.”  Leach is a professor of history and American studies at Trinity College, Hartford, Conn. He earned his doctorate at Yale University in 1977 and specializes in the cultural and intellectual history of the 19th century, working-class history and multiculturalism. Email.

My understanding of the early evolution of educational broadcasting has been molded by the publications of many able historians: Erik Barnouw (A History of Broadcasting in the United States, three volumes, 1966-70); Robert J. Blakely (To Serve the Public Interest: Educational Broadcasting in the United States, 1979); George H. Gibson (Public Broadcasting: The Role of the Federal Government, 1977); Frank Ernest Hill (Listen and Learn: Fifteen Years of Adult Education on the Air, 1937, and Tune In for Education: Eleven Years of Education by Radio, 1942); Harold E. Hill (NAEB History, Volume 1, 1954); and John Walker Powell (Channels of Learning: The Story of Educational Television, 1962).

However, in this narrative, I have tried to advance a new thesis, that the phantom of Cooperation was a potent cause of radio educators’ defeats during the ’20s and ’30s. To substantiate my argument, I have assembled evidence from many underutilized collections in Washington, Madison, New York, Chicago, Ithaca and Columbus. In the following notes, I have chosen to stress these less familiar materials rather than the secondary sources that already are well known to students of broadcasting history. — Eugene E. Leach, 1983

A book on the subject

For a book-length treatment of the period, see Robert W. McChesney’s Telecommunications, Mass Media and Democracy: The Battle for the Control of U.S. Broadcasting, 1928-35 (Oxford University Press, 1993). Leading broadcast historian Erik Barnouw wrote this cover blurb: “How our nation was maneuvered, during pre-television years, into a broadcasting system controlled by and for business is traced in illuminating detail in this remarkable study.”

The famed 1950s foundation-subsidized TV show Omnibus and the Bell Telephone Hour programs on Shakespeare and science, hosted by Frank Baxter, were late instances of Cooperation on the commercial networks.

One thought on “Tuning out education”