In this letter to the first Carnegie Commission, the Pulitzer Prize-winning New Yorker magazine essayist (1899-1985) gives one of the most compact and eloquent descriptions of what advocates hoped public television would become. (White’s books included Charlotte’s Web, and he co-authored The Elements of Style, familiar to many English students.)

On stationery of the magazine where he worked for years, White addressed Stephen White, assistant to the Carnegie Commission chair, James R. Killian Jr.

Chapter 1 of the commission’s report begins with an excerpt from the letter shown in color below. 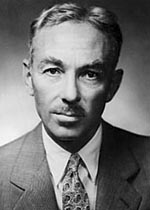 I have a grandson now named Steven White, and I’ll bet he can swim faster and stay under longer than you can.

As for television, I doubt that I have any ideas or suggestions that would be worth putting on paper. Non-commercial TV should address itself to the ideal of excellence, not the idea of acceptability — which is what keeps commercial TV from climbing the staircase. I think TV should be providing the visual counterpart of the literary essay, should arouse our dreams, satisfy our hunger for beauty, take us on journeys, enable us to participate in events, present great drama and music, explore the sea and the sky and the woods and the hills. It should be our Lyceum, our Chautauqua, our Minsky’s, and our Camelot. It should restate and clarify the social dilemma and the political pickle. Once in a while it does, and you get a quick glimpse of its potential.

As you see, I have nothing specific to offer and am well supplied with platitudes, every one of them gilt-edged. But thanks for the chance.