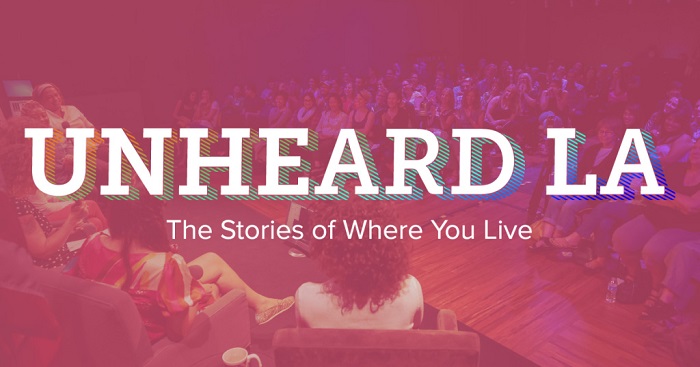 Throughout the spring of 2017, our live events team, led by Jon Cohn and Ashley Alvarado, used every tool in the community engagement box to solicit the stories. They employed the Public Insight Network, set up a texting service through Groundsource, distributed postcards at 70 public libraries across the county and shared project information on multiple social media platforms.

We received more than 250 submissions with stories as diverse as our region. 25 storytellers and three performance groups were selected. Jon and Ashley worked with the community members to sharpen their performances. Almost all the story tellers were new to KPCC and the stage.

We produced three live shows to showcase the stories at locations around the city.

As soon as we opened the RSVP pages for the shows, there was an immediate, overwhelming response. The L.A. Weekly made our show a ‘pick of the week’ and the series got picked up in several other local media outlets including the L.A. Daily News, Latino L.A., and the San Gabriel Valley Tribune.

After the sold out shows, we hosted mixers to give the audience, storytellers, their friends and family, as well as KPCC staff the opportunity to meet, connect and learn more about one another.

We received strong, positive feedback from the audience. An attendee at our first show said, “This was the best reflection of L.A. that I have ever seen on stage”. Another audience member said, “The stories captured up and made an impact. Listening to people’s stories opened our eyes to other people’s problems.”

This successful experiment speaks directly to a challenge facing public radio stations across the country: what does it mean to turn our radio stations into community platforms?