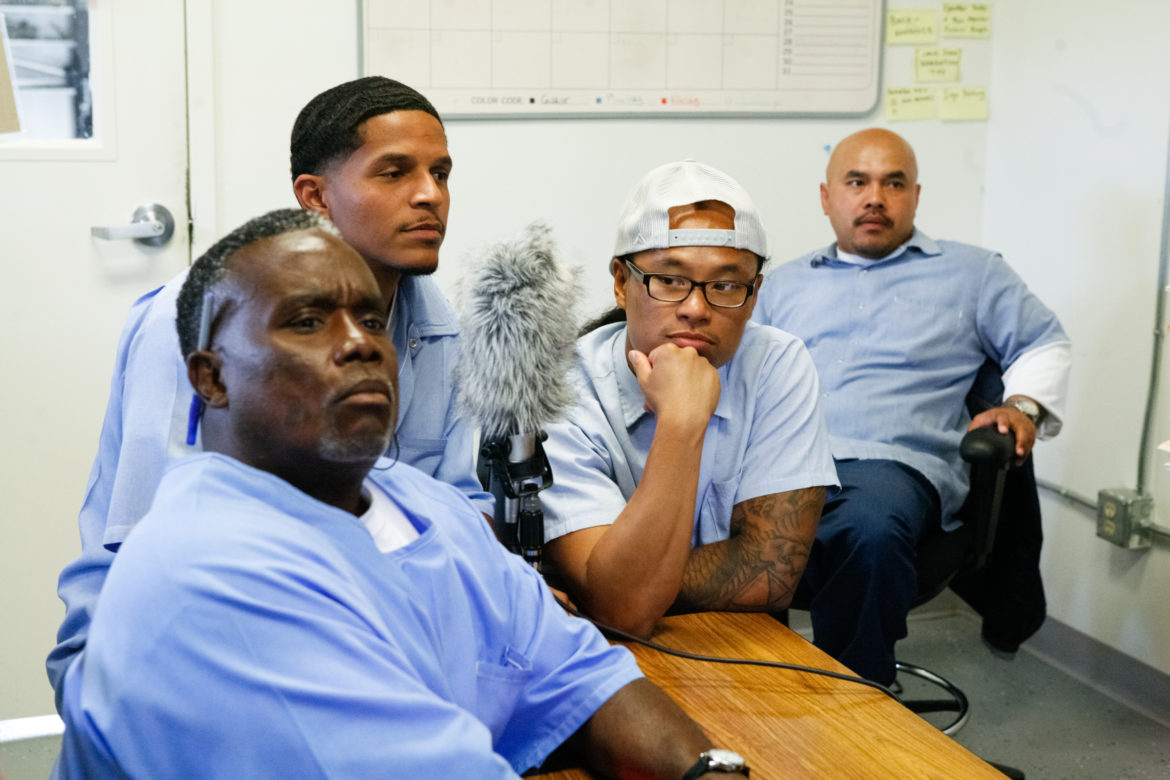 The United States locks up over two million people – more than any other country in the world. Most are people of color, and most come from low income backgrounds. They lose freedom of movement, regular contact with their families, voting rights, and access to phones and the internet. Their faces and voices are erased from our media, except as monsters and fictional stereotypes. Uncuffed gives people in prison the power to tell their own stories.

KALW is an NPR member station in San Francisco with a long history of training reporters, storytellers, and audio engineers. Our mission is to bridge the divides in our communities. One way we do that is by training producers from underserved groups. It was a natural step for us to teach people in prison how to be media makers.

KALW began teaching audio journalism to people at San Quentin Prison in 2012 and expanded to Solano State Prison in 2018. We teach students how to interview, record and edit using ProTools software. Participants learn how to do interviews in the style of StoryCorps. They conduct a 40-60 minute interview, and edit it down to a 6-8 minute audio gem.

Last year, we launched a podcast version of the series. In it, the producers have roundtable conversations about the themes brought up in their interviews. We’ve aired more than 90 interviews and stories produced behind bars, and our podcast has over 33,000 downloads.

The work has been extremely successful. Uncuffed producers have won several awards from the Society of Professional Journalists and the San Francisco Press Club. The New York Times called Uncuffed a “moving new show.” We were featured on Ear Hustle, Reveal, Snap Judgment, KQED, The California Report, KCRW, the UK’s National Prison Radio and other outlets. The statewide prison TV system now broadcasts many of our pieces, allowing other prisoners to see people like themselves in a positive light.

In-person classes are cancelled due to the pandemic but we’ve continued mail-in journalism courses. Meanwhile, we’ve used our network and reputation to tell the story of how COVID has ravaged prisons. We made a special episode featuring people writing letters to their loved ones in prison, whom they haven’t been able to visit. Our relationships in the community have improved local coverage of prisons, for KALW, and for our partner outlets.

Uncuffed can be a model for any media outlet with a prison in its area. We’ve already helped similar projects get off the ground, and are willing and able to offer our resources and experience to other groups. In nearly every prison there are arts and educational programs funded by governments and nonprofits. Especially in the current era of prison reform, opportunities to teach in prison are on the rise.

Our listeners are deeply moved by these stories, and often mention that Uncuffed is one of their favorite programs. One listener wrote, “I will do my part: donating, protesting, writing to lawmakers, sharing your story. I will carry your story in my heart and head, allowing it to inspire me, to guide my own actions and to stay in the fight.”

For the participants in the program, this work is life-changing. They learn valuable skills in communications and media, and see themselves as people whose voices matter.

“I feel as if I am finally part of something worth being a part of,” says producer Brian Thames. “I’m a part of humanity who actively foster goodness and empathy in the world.”

Earlonne Woods and Antwan Williams, the founders of PRX’s Ear Hustle, were trained in our program. Woods was granted a commutation citing his work on the show. Both men are now employed by PRX, creating a podcast that exposes millions to listeners to the injustices of mass incarceration.

Another past participant, Adnan Khan, says our program gave him his first glimpse of the power of his words. While incarcerated, he created a resentencing bill that set him and others free. Now he runs an advocacy organization and is regularly quoted on prison issues.

KALW helped San Quentin establish a chapter of the Society of Professional Journalists which has launched media careers for several people post-incarceration, and which offers seminars on prison reporting for journalists around our region.

Uncuffed stories also have a profound impact on the interviewees and their families. One man shared his story widely after he paroled. He said it was the key to his community understanding that he had changed, and welcoming him home.

Uncuffed is building momentum. As our audience grows, the opportunities to expand the program and its impact multiply. We hope many other stations follow our model, connecting the public outside to the community inside.

The California Arts Council’s Arts in Corrections program gave KALW $93,400 for the first two years of our program. After demonstrating our program’s success, we were granted a new contract for $693,000 over three years. To date we’ve also received $1,200 by licensing stories to other outlets.