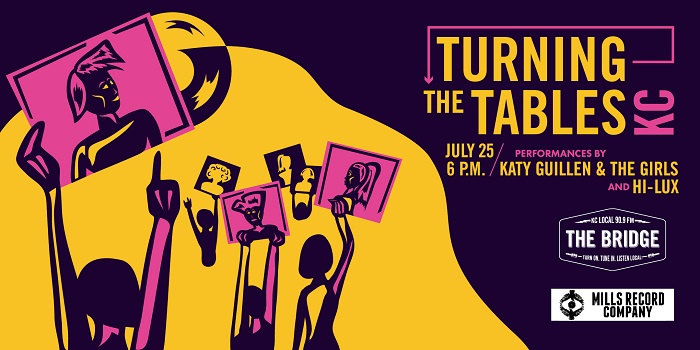 On July 5, Bacon posted the series kick off article requesting a “list of influential female musicians, vocalists and bands, from the forebears of the area’s music scene to those who are shaping it today.” She received over 100 submissions via Surveymonkey, direct message and social.

Follow up article, “Then vs. Now,”  published July 12, examined the boys club environment, drive to work harder, importance of mentorship and persistent underrepresentation. Bacon published her third installment in the series “The Gender Disparity” article on July 19. In tandem, writer and attorney, Dan Calderon, published “Setting the Record Straight: The Female Rocker Bill of Rights” on sister website Flatland. Bacon’s series culminated July 26 with “The Influencers” and a Spotify playlist gathered from the survey responses posted earlier in the month.

Wednesday, July 25, The Bridge hosted “Turning the Tables: KC Showcase”,  a panel discussion and live performances by local favorite Katy Guillen & The Girls and the fast rising Hi-Lux, at Mills Record Company in Kansas City’s Westport district. Over 150 people turned out in support of the project.

After a number of brilliant graphic illustrations encapsulating the ideas and emotions of the series, the project’s graphic designer, Amanda Krenos, unveiled the limited edition, custom event shirt.

Attendees filled out comment cards, responding to the question “What’s the weirdest or most offensive comment that’s been said to you, overheard at a show or concert, read in a music review or heard on-air?” to receive a shirt. 90.9 The Bridge’s passionate volunteers supported the project by attending and staffing the event as well as promoting the project on social media.