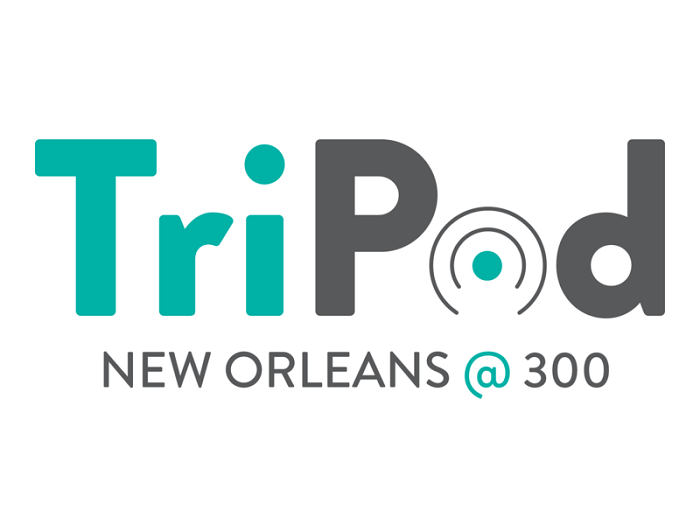 In 2015, WWNO set its sights on producing a radio program about the city that would be meaningful and distinctive. We felt that our audience would be fascinated by a program that reveals New Orleans’ hidden, neglected, misunderstood, or misrepresented history. Delving into a more diverse and accurate history of the city would provide an honest and inclusive community narrative with which New Orleans could face the challenges of the years ahead.

TriPod was never meant to be nostalgic, but relevant, both in tone and content. Episodes would be exploratory, conversational, and highlight the parallels and links between past and present.

To ensure that TriPod stories are accurate and reflect the latest scholarship, we created an editorial board of respected local historians to work closely with the show’s producer, helping to select topics and identify sources, review scripts, and challenge interpretations. We also assembled an advisory group of 40 local and national historians. This support network not only ensured quality content, but was a built-in tool to expand its reach.

To reach the largest audience, TriPod was planned as a broadcast feature, designed to air during Morning Edition and All Things Considered, and would also stream as a podcast, and be reformatted into web articles to capture audiences more drawn to print. Focusing on 10-minute features, rather than a typical long documentary, also made the series affordable and achievable.

TriPod’s most ambitious component was an hour-long special on the relationship between New Orleans and Haiti. In the decades following the Haitian Revolution, an influx of refugees doubled the size of New Orleans, making a lasting impact on many aspects of our food, music, religion, language, and architecture. These are all reasons why New Orleans fancies itself part of the Caribbean, and Haiti, in particular, something of a sister place.

In August 2017, TriPod traveled to Haiti to hear from historians, musicians, former government officials, geographers, architects, tour guides, and everyday folks who created a portrait of the Haitian perspective on the relationship and its relevance today.

The resulting one-hour program, “Haiti and New Orleans: Is the Feeling Mutual?”, won a 2018 Regional Edward R. Murrow Award for best documentary. We also hosted multiple events to have public discourse on this historical relationship, which brought out hundreds of New Orleanians of Haitian descent.

So far, the TriPod team has produced 60 original segments.