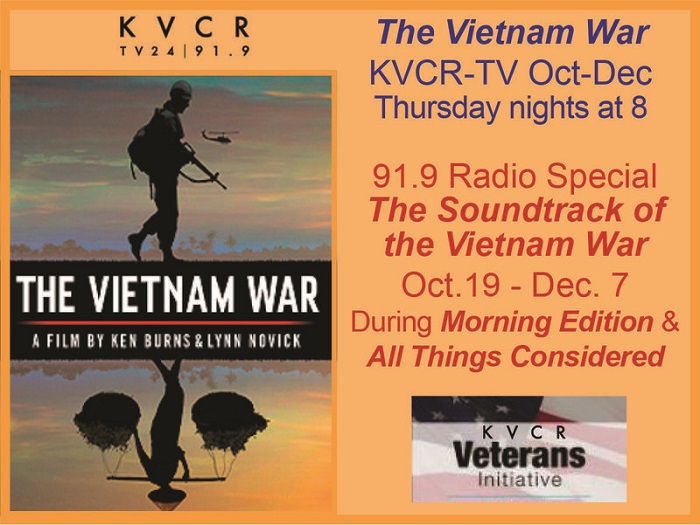 In the fall of 2017 and in conjunction with the PBS broadcast of Ken Burns and Lynn Novack’s film “The Vietnam War,” KVCR wanted to share the stories of local veterans through the sounds of music. In between Simon & Garfunkle’s “Bridge Over Troubled Waters” and John Fogerty’s “Fortunate Son,” we heard stories of walking through the jungle of Vietnam, an explanation of looking at clouds from both sides, walking through the night of fear and having the chance to see sun rise one more time. We heard how some of their buddies didn’t make it home and the guilt they feel for coming home. The songs of choice were significant to each of the veterans we interviewed and for different reason. But we were able to hear their story through music.

We reached out to Guitar’s 4 Vets, a nonprofit that uses guitar lessons as a form of therapy, to inquire if any of the veterans would agree to be interviewed. We also contacted our friends at the VA hospital, and two veterans agreed to be interviewed. When it was all said and done, six veterans – four men and two women – agreed to come to the studio and share their music and intern their story

We decided to produce the radio series to cross promote the The Vietnam War series and invite our listeners to tune in and watch the episodes on our PBS station. Our TV station aired the film on Thursday nights, and we ran our radio series on Thursday morning during “Morning Edition” and in the afternoon on “All Things Considered,” giving listeners time to tune in that evening to watch each  weekly episode.

This project was part of our on-going KVCR Veteran’s Initiative. Our Veteran’s Initiative was created to help promote and create awareness about veteran programs available in our region, capture veterans’ stories for historical preservation, better inform the general population of the veterans’ service, and express our gratitude.