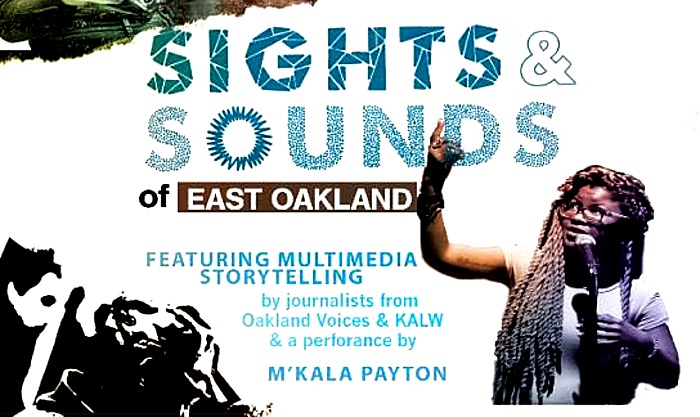 KALW has presented five Sights & Sounds of East Oakland live events since 2016, and will present five more by June 2019.

Several years ago, KALW managers thought the station could be a better public service if it spent time getting to know and reporting stories within some underserved communities around the Bay Area. We started in San Francisco’s Bayview/Hunters Point back in 2013, putting together a community show with live storytelling, music and dancing at the Bayview Opera House. It was a great time, really brought people together, but we realized as we held a second event that we weren’t working closely enough with the community to tell the stories that mattered most.

Soon after, KALW news director Ben Trefny met Martin Reynolds, former editor-in-chief of the Oakland Tribune and Maynard Institute co-executive director, who had co-founded a community journalism program out of East Oakland called “Oakland Voices.” We worked together to develop a model in which East Oakland reporters could tell their stories with multimedia support at every level from KALW. We raised some money to help fund the work, and now we’re in our third year telling stories by and for people living in East Oakland, on the air, online and in person at venues around town.

In addition to Oakland Voices, we’ve brought on other partners over time, including the Oakland Public Library, the Cal Endowment-funded East Oakland Building Healthy Communities, East Oakland Youth Development Center, Eastside Arts Alliance, Youth Radio, El Timpano, Third Coast Audio Festival and others. We provide audio storytelling and journalism training to reporters from Oakland Voices, as well as to youth at the East Oakland Youth Development Center, through one-off workshops and longer multi-month sessions. We’ve also incorporated our Hearken-powered project, “Hey Area,” by soliciting East Oakland-specific questions and feedback at live events and also online, and assigning our staff and community journalists to coverage based on what we hear through these Hey Area: East Oakland channels. We air the audio stories on our local newsmagazine, Crosscurrents, and present the audio and multimedia projects, along with performing and visual artists who live and/or work in East Oakland, at live events both small and large.