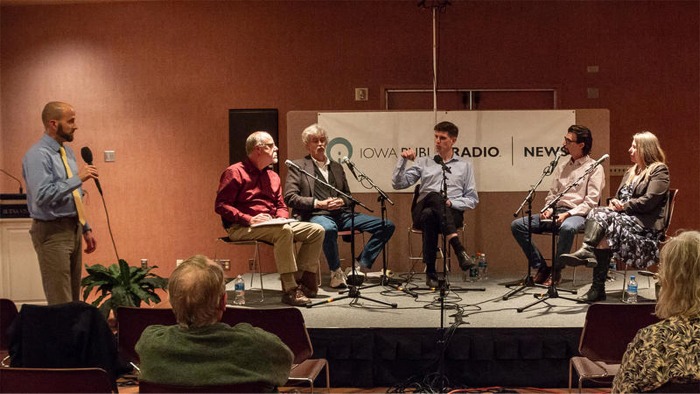 Iowa Public Radio began our Public Radio on Tap series in October 2017 to bring people together over a beer and facilitate honest conversation about tough topics. Water quality is a contentious issue in the state, increasingly so as urban populations grow and rural populations decrease. We’ve found that this is an issue that Iowans are passionate about, and they showed up: over 700 people (ages 2 months to 80+) have attended the series since we began it in October.

IPR’s Morning Edition host and reporter Clay Masters has covered water quality in the state for years, and he serves as a knowledgeable and enthusiastic facilitator for our Public Radio on Tap live panel conversations that have included guests such as the CEO and General Manager of Des Moines Waterworks; the Executive Director of the Iowa Agriculture Water Alliance; the Co-Leader of the team that developed Science Assessment for Iowa’s Nutrient Reduction Strategy; a Pulitzer Prize-winning editor of The Storm Lake Times, research scientists, farmers and more.

Our most recent Public Radio on Tap: Water Quality was hosted at Big Grove Brewery in Iowa City on Tuesday, July 17, 2018, in collaboration with The Water Main and MPR’s Flyover: Down the Mississippi River. Additional support for this event allowed us to augment our Iowa City conversation with travel funding to bring in an out-of-state panelist: Thomas Olander, a fourth-generation shrimper and Chairman of the Louisiana Shrimp Association. Collaborative funding also provided for a dynamic all-ages performance and hands-on activities from Iowa State University Extension’s WATER ROCKS, and other interactive on-site activities that helped draw an engaged crowd for the panel and Q&A.

We publicized the event on air and through email and social media. We had more than 350 people RSVP and attend the event. All ages were welcome and it was free and open to the public.

The brewery produced a custom-brewed IPR IPA (!) for us from Iowa-grown Chinook hops, and we hosted friends of the station for a pre-party keg tap and a chance to meet Morning Edition and panel host and Clay Masters and other IPR talent ahead of the public event.

Public Radio on Tap kicked off at 5 p.m. with brewery tours, a print-your-own t-shirt station from local small business and friend of the station The Side Garage, an all-ages performance by Iowa’s award-winning youth water education program Water Rocks and the reveal of their brand new Conservation Station/rainfall simulator at the brewery.