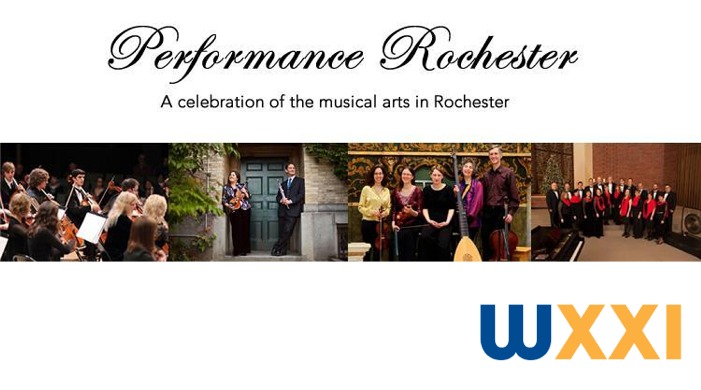 For the second year in a row, WXXI Classical 91.5 FM presented a multi-platform initiative called Performance Rochester. Leading up to this multi-platform event, WXXI connected with dozens of local performance ensembles in Rochester, asking them to submit to us the best performances of their recent season. We also reached out to local recording engineers who regularly record these ensembles, so WXXI (which has a very small production staff of two) did not have to do the recordings. We simply set the standards for recording which would be acceptable for broadcast.

In recognition of the significant classical music riches in Rochester, in April 2017 Classical 91.5 presented live performances from concert halls in and around Rochester and from the studios of WXXI Classical 91.5. Highlighted performances were curated from a number of ensembles, including: Concentus, First Inversion, Eastman School of Music, Hochstein Alumni Orchestra, Madrigalia, Musica Spei, Pegasus Early Music, Publick Musick, First Muse, Rochester Early Music Festival, Society for Chamber Music in Rochester, VOICES, as well as Live from Hochstein, Backstage Pass and more. Music covered all time periods and a variety of instrumentation and voices. We highlighted one group performance each day beginning in April 3rd and all of our hosts will share in celebrating the musical riches of Rochester.

Complementing the on-air initiative was a web component where all pieces were listed, with links to more detail about the repertoire, the ensemble, the artists, and podcasts of each piece (in case a listener missed the broadcast element – it could be heard again). Social media also plays a big part in this project, using Facebook and Twitter to promote the initiative.  Additionally each performing group was sent and email and link to their specific performance page which they were able to share through their social media networks. Complementing all of this was a series of five blogs posts on Where to Play and Sing in Rochester – highlighting local ensembles that members of the community can join to make music together. The whole purpose of this project is to celebrate the musical riches of Rochester, NY and to encourage people to take advantage of those riches, and even participate in some.