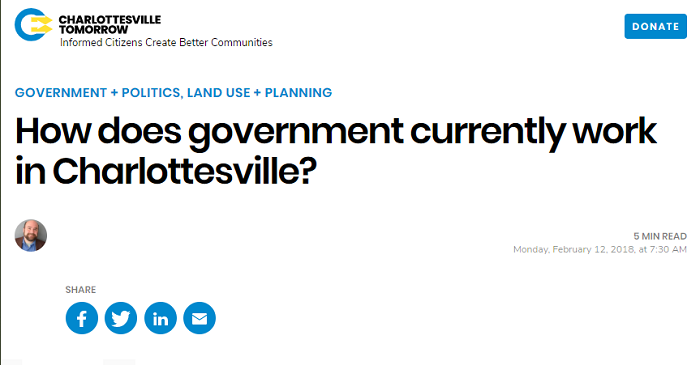 For both panel discussions, we advertised the events in the local daily newspaper through our unique partnership as well as the local weekly. We sent out Eventbrite invitations to our 14,000 subscribers through Mailchimp. We also publicized the events through social media. All of our staff came out for the events to help coordinate and set up, and our reporters took pictures, recorded the events and wrote articles covering the discussion for those who couldn’t make it and to serve as a community resource. We also followed up with attendees to get their feedback on the events and how we can keep the conversation going.

The first session on Sunday, February 11, 2018 from 2-4 pm focused on the current form of local government in Charlottesville, including the 5-member City Council elected at-large, the City Manager form of government, Dillon Rule state, revenue sharing agreement with Albemarle and numerous shared government services. The event was held at the Central Public Library in the heart of downtown Charlottesville, and we maxed out capacity at over 100 attendees. The facilitators were Andrea Douglas, the Executive Director of the Jefferson School African American Heritage Center, and Brian Wheeler, the Executive Director of Charlottesville Tomorrow. The panelists were Bitsy Waters, Charlottesville mayor 1988-90, Charles Barbour, Charlottesville’s first African American mayor 1974-76, Rich Schragger, UVA Law School professor and specialist in local governance and Tom Walls, Executive Director of the Sorensen Institute for Political Leadership. The event was an overwhelming success with a diverse audience and enlightening discussion.

Due to the popularity of the first event, we moved the second session to a larger auditorium at the Jefferson School African American Heritage Center. This event focused on alternative governance structures for the future, including questions like: What if Charlottesville elected its Mayor? What if City Council was elected by wards and had additional members? What if Charlottesville reverted to a town in Albemarle County? What if we had a strong mayor versus a city manager form of government? The facilitators were Andrea Douglas again and Bob Gibson, the Senior Researcher for the Weldon Cooper Center for Public Service. The panelists were Bill Pantele, who served on Richmond City Council 2001-09, George Gilliam, who served on Charlottesville City Countil 1972-76, Joan MacCallum, the first woman on Lynchburg City Council, 1978-94, and Rich Schragger again.

The event was a great success with valuable insights from the panelists and questions from the audience.