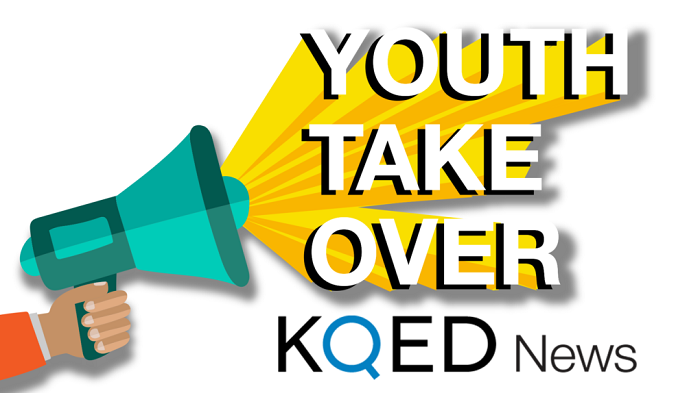 In April, KQED hosted a “Youth Takeover” of the news. Over the course of one week, stories pitched and reported by high school students across the Bay Area could be heard on nine of KQED’s news programs and podcasts. To collect and curate these stories, KQED staff collaborated with a pilot group of ten local high school journalism classes over two months. KQED also teamed up with NPR Generation Listen to produce a live storytelling event featuring youth voices.

The Youth Takeover at KQED was a natural progression to KQED’s greater community engagement goals, and to the Education Department’s specific youth media-making goals. A newly formed Youth Media team in 2016 that established the organization’ s first Youth Advisory Board and was charged with creating youth media challenges for the classroom set the stage. It was a logical next step to build a bridge to KQED’s news room and leverage that incentive to have youth media submissions potentially get on air.

The Youth Takeover was a pilot project from KQED Education in which youth from 10 Bay Area high schools submitted story pitches to KQED to “take over” the news for a week. Student stories and reporting was aired throughout the week of April 23rd, 2018 on radio news broadcasts, online and on popular programs like Forum, The California Report and Perspectives.

Staff at KQED in the Education and News departments partnered with teachers from the ten schools to work with students throughout the process, providing them with resources, support and guidance.

Pitch week was designed to get students on the right track from the start and connect your class with KQED journalists and producers. Following pitch week, three members of the KQED Education Department team selected promising stories and teachers worked with students to rewriting, re-recording and piece their final pieces together.

After the stories and reporting aired throughout the week, the Education Department held a live multimedia event, where student voices delivered and discussed today’s their stories. The event was hosted by Myles Bess of KQED’s YouTube series, Above the Noise and featured Special Guests: Sasha Khokha, Host of KQED’s The California Report Magazine, and Sam Sanders, Host of NPR’s It’s Been A Minute.