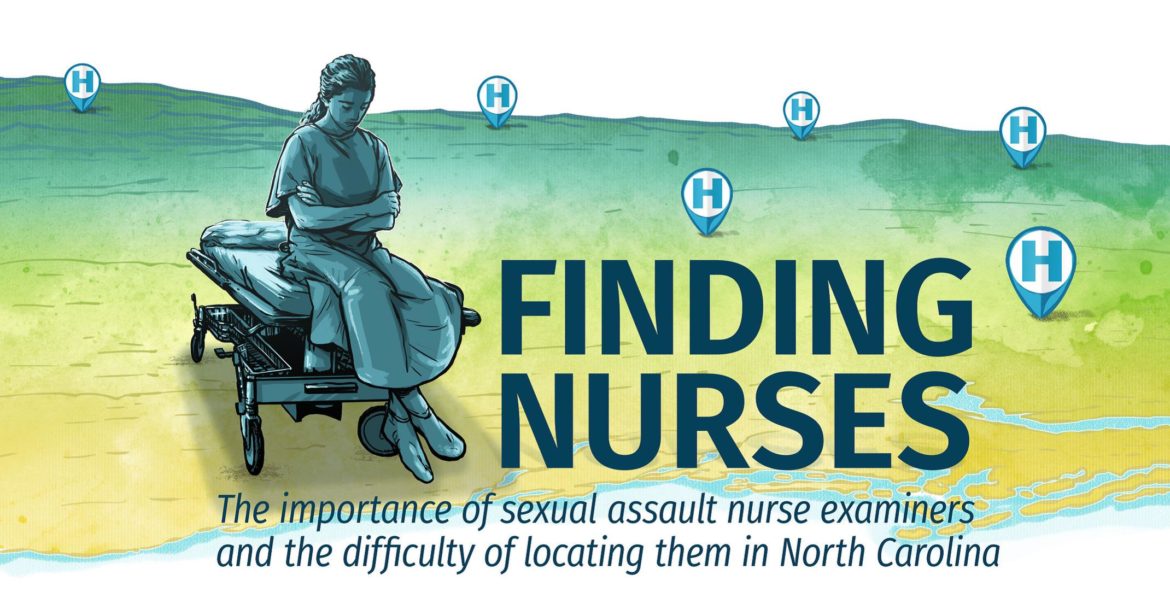 The CPP Finding Nurses project was an investigative, in-depth reporting project that shined a light on the lack of Sexual Assault Nurse Examiners, or SANE nurses, in NC and how this impacts sexual assault survivors and the prosecution of their attackers. This project builds on CPP’s prior series Seeking Conviction, an investigative series examining sexual assault convictions in NC. Seeking Conviction led to legislation that reforms state sexual assault laws, extends the statute of limitations for civil suits against perpetrators of child abuse and includes a number of other safety protections for children.

SANE nurses receive specialized training to provide emergency medical attention and gather forensic evidence following sexual assaults. They are experts at collecting and cataloging the evidence of the assault, which can be used in a criminal investigation and prosecution. They also help prevent sexually transmitted infections after an assault. Some hospitals in NC have SANE nurses, but it’s not required, and no one is keeping track. After a sexual assault, survivors have choices to make. Do they seek help at a hospital? If they do and if they are lucky, they’ve arrived at a hospital with one of these nurses who have been trained to understand how to help a victim take care of her or his health after a traumatic experience.

Through this investigation, CPP found that many hospitals, especially outside major cities, do not have SANE nurses or are forced to share them with other facilities across a wide area. In fact, many hospitals, including several major chains, refused to disclose details to the public. This means a sexual assault survivor, especially those living in rural areas may have to drive long distances to receive specialized emergency care. And when she or he arrives at their local hospital, they may be told that the hospital has no SANE program so they have to seek care elsewhere. A survey of hospitals across NC found uneven results for staffing sexual assault nurse examiners. Some described rape victims visiting multiple hospitals until finding one with the proper personnel.

CPP conducted a survey, spoke with representatives from hospitals, forensic nursing programs, law makers and sexual assault services in an effort to highlight the issues and systems contributing to the lack of emergency care for sexual assault survivors. CPP also explored potential solutions from local efforts to statewide policies to programs in other states.