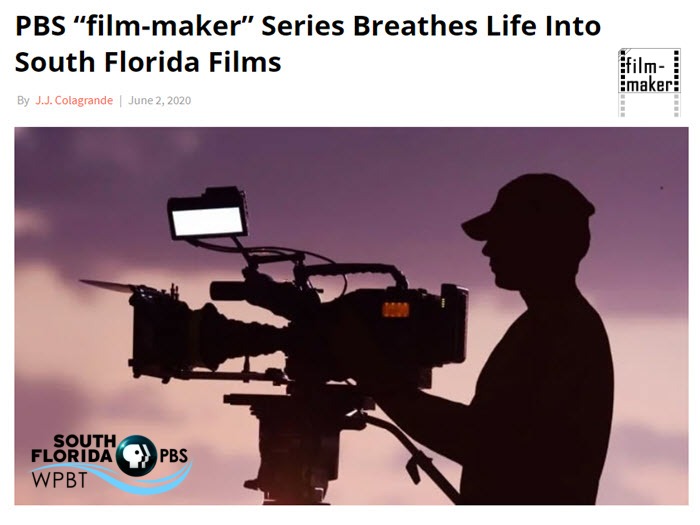 The filmmaker initiative serves 40 artists from the Keys to the Treasure Coast and reaches an audience of over 6.3 million. Co-directed by three senior South Florida PBS staffers with support from local partners‚ film festivals and professional organizations‚ filmmaker connects talented local filmmakers with a major new audience. These filmmakers will also receive pivotal guidance and mentorship as they build careers from their passions.

The filmmaker initiative is a project for emerging South Florida filmmakers that acquired, broadcasted, and distributed their work as well as provided mentorship. Though South Florida is experiencing a cultural renaissance, the filmmaking community is at a dire crossroads. State incentives and funding cuts are hindering the growth of this community just as our homegrown talent begins to garner national and international recognition. South Florida PBS’s filmmaker program is an effort to counteract the talent drain currently taking place. This initiative addressed the needs of struggling filmmakers and presented a chance for film lovers to make a difference through their support.

After successfully acquiring a grant from the National Endowment for the Arts, South Florida PBS launched its new film-maker project. The project’s Board of Advisors represent the South Florida filmmaking community, with representatives from FilmGate Miami, The Palm Beach County Film & Television Commission and other top industry experts. From years of collaborations, South Florida PBS also has strong ties with film festivals, secondary and college-level schools, film commissions and numerous working professionals.

The film-maker project was co-directed by three senior Emmy Award-winning South Florida PBS staffers and local film professionals. The goal of the project was to acquire, broadcast and distribute emerging South Florida filmmakers work, as well as provide mentorship and guidance as they build careers from their passions. The results of this collaboration were seen in the form of short and long-form independent films that aired on WPBT and WXEL from January to June 2018. From documentaries to narrative films, these stories make you cry, laugh and wonder. This film-maker series underscores the depth of our homegrown talent in all aspects of filmmaking, exposing these remarkable films to our SFPBS audience, often for the first time.