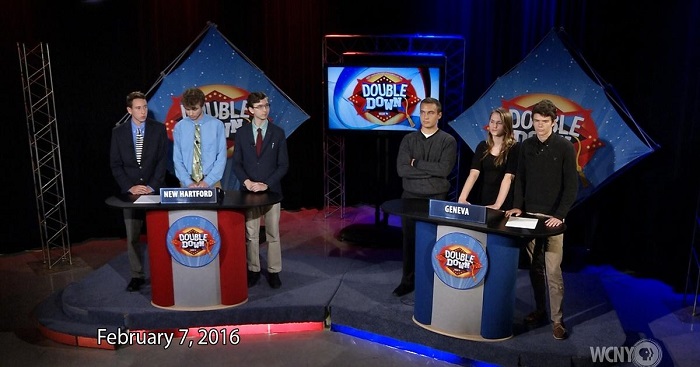 Now in its 13th season, Double Down is a televised Jeopardy-like half-hour weekly game show for teams of high school students from WCNY’s 19-county viewing area. Teams of students in grades 9-12 compete in matches that consist of four rounds, answering questions on a variety of topics. To make the show fun and competitive for the participants, as well as visually entertaining for television viewers, each show is recorded without interruption in the television studios at WCNY. Actual recording of each match takes approximately a half-hour, with as many as three Double Down shows produced daily.

Question categories are: English Language Arts/Literature, History/Geography, Science, Math, Arts, Current Events and Sports. Questions are written by educators or selected from a high-quality question database. Each season kicks off with a qualifying day. Teams come in and play a “lightning round” of questions and the 16 highest teams move on to the televised match portion of the competition.  Double Down kicks off in October each year. The maximum number of times a team needs to come to WCNY to compete is 3 times, including Qualifying Day.

Double Down spotlights students who are academic achievers and provides an entertaining and educational television experience for viewers of all ages as teams compete to earn cash prizes for themselves and their schools. Double Down also complements our New York State high school exam broadcast and online series, Regents Review, further demonstrating WCNY’s interest in the success of students.