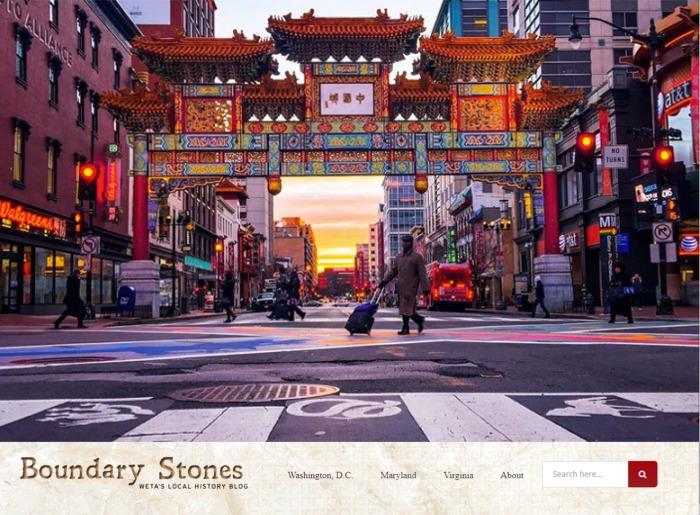 We launched WETA’s Boundary Stones Local History Blog in October 2012 with the goal of digging up and sharing interesting stories from our community’s past. To date, we have posted over 400 articles on a large variety of Washington, D.C.-area history topics including politics, music, pop culture, crime, sports, weather, and everything in between. We promote the pieces via WETA’s Facebook and Twitter accounts, where they are routinely among the most popular items in our feed. We also maintain a dedicated Boundary Stones Twitter account where we discuss our articles and engage around local history topics.

The idea for the project stemmed from the enthusiastic response that our television viewers had shown for WETA’s local history documentaries such as “Washington in the 60s” and “Washington in the 70s.” When those shows premiered almost 10 years ago, viewers began commenting on our station website en masse, sharing local lore, memories and stories. That conversation continued for years, long after the shows left the schedule. Clearly, there was an appetite for more local history content online, so we created the blog!

Like many projects in the public media world, Boundary Stones started as a labor of love. Initially, we didn’t have a budget for the project or a ton of resources to devote to it so we looked inward. Our Digital Media department had several history enthusiasts on staff who started researching topics and writing articles aside from their regular day-to-day responsibilities. In addition, we brought on interns — generally history or journalism majors. Over time, as the blog gained traction, we added a few paid contract writers. But, the majority of the articles continue to be written by staff or interns.

Since the project launched, we have made a concerted effort to engage – online and in person – with other individuals and institutions that are active in the Washington, D.C. area local history community. For example, we’ve had local historians guest blog for Boundary Stones. We’ve also presented about the blog to the Guild of Professional Tour Guides and attended local history conferences. In addition, we created a partnership with the Arlington Historical Society, wherein we filmed short web documentaries about topics discussed at the monthly AHS programs and blogged about them.

All in all, we feel that the blog extends WETA’s mission to educate and entertain our audience. In a transient city like Washington, knowing more about local history can help readers feel more grounded and invested in their community. However, the same could be said about any other city or town across the country. Every community has a history and unique stories! Thanks to the rise in online archives, including the Library of Congress’ Chronicling American newspaper archive, it’s much easier than ever before to tap into those stories. So, there’s nothing unique about Washington, which makes a project like this possible — the Boundary Stones model could work in any market.