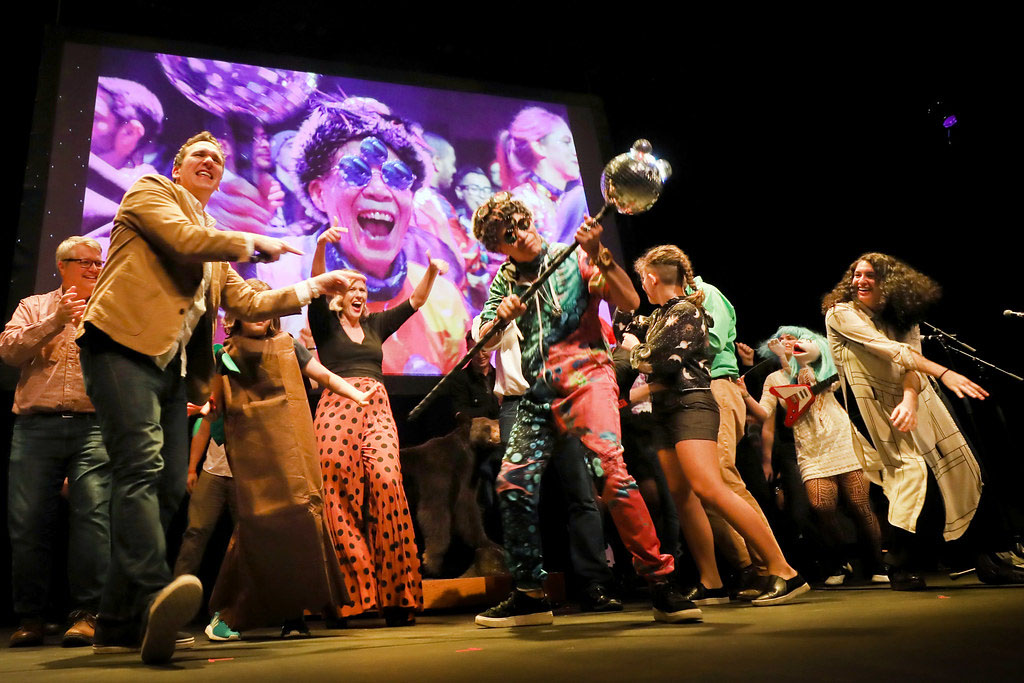 While KUT uses the Hearken engagement management system to connect with listeners on important topics such as politics and the economy, we also use it to fuel the ATXplained reporting series, which connects citizens to our community through fun crowd-sourced questions about Austin’s people, places and culture. Listeners submit their questions and vote on them, and KUT reporters investigate.

To engage with audiences in a more immersive way, KUT News took ATXplained to the stage Jan. 23, 2020, for ATXplained Live, an evening of storytelling based on listener questions.

A sold-out crowd of more than 1,100 people experienced eight never-before-heard ATXplained stories told live on stage by KUT News journalists. The stories were brought to life in new and engaging ways through photography, props, costumes, dancing and audio effects, including live music performing by an emo puppet ensemble.

One of the stories, Austin’s Club Scene Has a Godfather, shed light on the self-proclaimed godfather of Austin clubbing – a nearly 70-year-old man named Yorkie Louie who finds solace on the dance floor of Austin’s clubs after a series of dramatic life changes that include losing his partner and most of his friends to AIDS. Louie has become a mentor to a group of young clubbers, helping them embrace the cathartic powers of dancing and music. At the end of the story as told from the stage, the audience broke into dance. This story also won a 2021 National Murrow award for storytelling.

Another story answered the ATXplained question: Who is Buried in the Cemetery On 51st Street? Audiences learned about the poorly marked graves of residents of the nearby Austin State Hospital over the last century. Because of the stigma of mental illness at the time, many of the graves were unmarked so that passersby didn’t associate names on graves with people in town – leaving many lives lost to obscurity.

“Each ATXplained story allows us to engage with listeners and give them a new understanding of something that they might have always wondered about,” says projects editor Matt Largey who produced the event. “ATXplained Live creates an original, immersive way for audiences to experience these stories, enabling them to interact with the people they hear on the radio, connect with their local community in a deeper way, and showcase the storytelling talent of KUT’s journalists.”