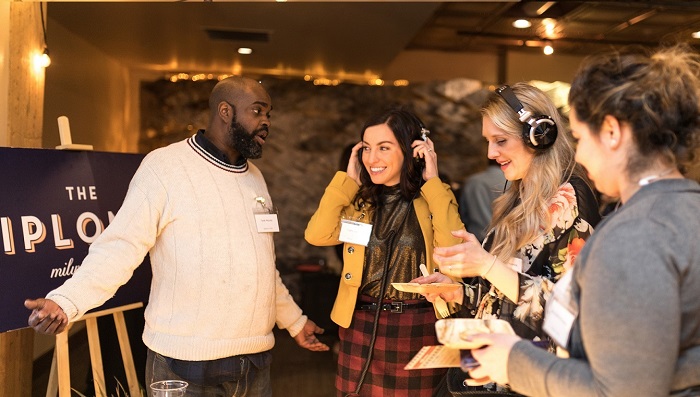 In addition to a mix of diverse and local music, 88Nine reaches a new generation of radio listeners with an entertaining and adventurous series of public affairs programming. Radio Milwaukee seeks to reflect Milwaukee, its music, its people and its values, in what we put on air and online. We want to show our commitment to bringing out the good in our community, with the intention of showing that Milwaukee is changing for the better. 88Nine Presents is a series of audio and video stories that look closely at different aspects of our city. This series specifically aims to cover a range of topics that can often be divisive, but we present the stories with a solution-based approach. We seek to highlight is working with the hopes of opening our listeners’ minds to all sides of a story.

Telling stories that speak to the heart of what connects us and makes us human is at the core of our mission. We consider ourselves to be well-positioned within the Milwaukee community to tell these stories on-air and online, and even on-site in our multipurpose community space that is open to the public. Our series each include videos that range from 3-8 minutes; and on-air segments are shorter, often teasers or abbreviated versions of the stories roughly around 1-2 minutes.

In our first series, “Milwaukee with John Gurda,” we teamed up with local historian and writer, John Gurda to dive into the past and present of 8 Milwaukee neighborhoods, from the heavily populated hipster neighborhood to the most isolated neighborhood in Milwaukee. The idea for the series came after the release of Gurda’s 2015 book, “Milwaukee: City of Neighborhoods,” which chronicles 37 contemporary portraits of Milwaukee’s neighborhoods.

Our second series, “National and North”, shares intimate stories from 8 people who live along two of Milwaukee’s longest streets that run through very culturally and racially diverse neighborhoods. Participants ranged from widows, to immigrants, to entrepreneurs. Our questions are drawn from the work of social psychology researcher Arthur Aron, now popularly known as the 36 Questions to Fall in Love. Milwaukee has been known to be one of the most segregated cities in our country, so this was rooted in a deep purpose of opening our listeners minds and hearts with a sense of empathy.

The most recent series we released, called “At The Threshold,” dove into the Milwaukee foster care system. Through 6 episodes, we shared stories from individuals on all sides of Milwaukee’s foster care and adoption system, including foster parents, social workers and even young adults and children who were in the system.

Our team is currently working on our next series, which will expose some of the hot button issues of segregation in Milwaukee, due to launch this fall.