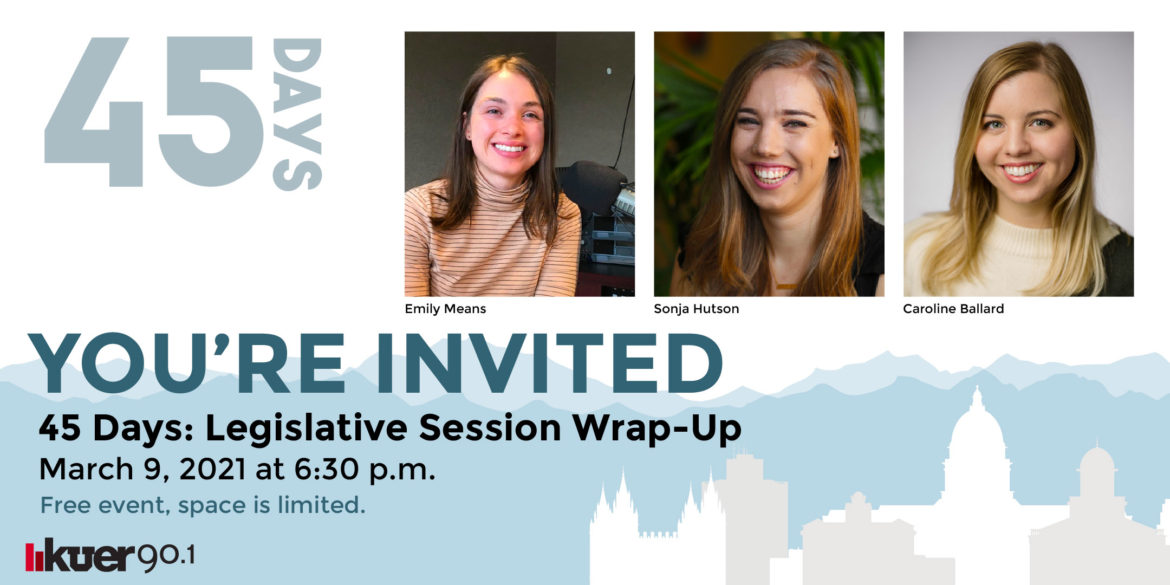 In service to our statewide audience, KUER’s two government reporters produced the fifth season of the “45 Days” podcast, providing a fun, conversational, behind-the-scenes look at the bills of this year’s Utah legislative session so that average people understand and are empowered to participate in the democratic process. A few of the nine episodes were “What would you do with $21,000,000,000?” “Puttin’ on the Rent” and “The Build-a-Bill Workshop.”

KUER staff have organized several in-person and on-line “45 Days” engagement activities to promote public discourse:
• The “45 Days” e-newsletter delivered to 1,200 subscribers
• Gatherings kicking off the legislative sessions for people to mingle with lawmakers
• Social media content including election infographics with candidates’ answers to questions and an overview of ballot initiatives
• Reporters appearance on PBS Utah’s the Hinckley Report and panel discussions for civic groups including the Better Utah Institute for Police Reform

Building on analytics gathered for the “45 Days” podcast, we’ll re-launch it this fall with a new name, “State Street,” to include three seasons of eight episodes each. The goal for this iteration is to build a more diverse audience, specifically those aged 25-45 who are relocating to Utah (Utah has the fastest growing population in the nation, an average of 18.6% in the past decade vs. a national average of 7.4%)

The team formulated the “State Street” strategy after compiling data from about 100 surveys, 25 empathy interviews with constituents and four “shark tank” sessions with staff.

They discovered that the public wants dialogue and programming about civics and the Utah political landscape, who the policy makers are, and the impact of politics and policy on individuals’ lives. They will present politics in a way that supports continued engagement and encourages target audience members to actively participate in conversations. Each of the three seasons will include eight episodes of about 20 to 30 minutes. Two of the first season’s episodes will include “How did we get here?” and “Who Gets to be a Politician?” – since legislators are part time, what jobs allow for participation? Public engagement activities for “State Street” will include the aforementioned and be expanded to include:
• A self-published “Zine” with a glossary of legislative terms and stories about government
• “State Street” workshops for the public about how to follow a bill through the legislature.