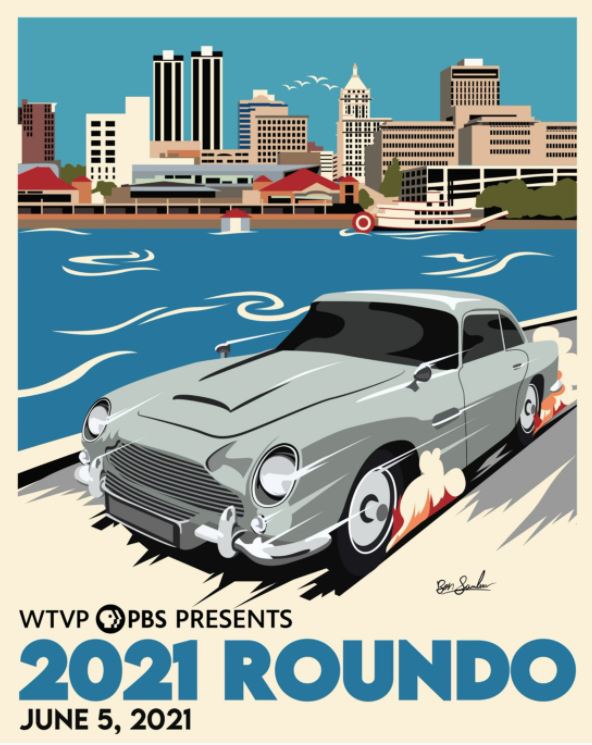 Central Illinois has a thriving car culture, with tracks museums, drag strips, car clubs and cruise-ins highlighting the Spring to Fall months. The Development Department thought we could generate awareness and funds by integrating into that community. The core principle behind the organization and hosting of the WTVP Roundo was creating a new, fun and exciting event surrounding cars and bringing enthusiasts of all ages together in support of WTVP.

As an inaugural event with planning undertaken during severe COVID restrictions, we intentionally limited the number of entries through invitation-only registration and kept as much of the event as possible outdoors. Many sponsors were equally excited about supporting this new event and supporting WTVP. The event took place on June 5, 2021.

The Roundo event was a clued tour through Peoria and Tazewell counties in Central Illinois. Each participant was given a set of clues that they deciphered along the way to reach specific destinations scattered throughout the region. Those destinations had specific tasks, presentations, photo opportunities or information to gather during the visits. Although we kept the destinations varied, many had an automotive theme. We carefully designed the Roundo so it was not a contest that tempted drivers to exceed the speed limit or violate state laws while on the road. Rather, Roundo was conceived as a fun drive where participants would go to exciting destinations, socialize with other car enthusiasts, spent time with their cars and co-pilots, and raised funds and awareness for public television.

The journey began at our main sponsor’s business, then proceeded out to the destinations and eventually ending at our studio. At the studio, we displayed a collection of highly unusual and rare cars such as a 1928 Rolls Royce, a Ferrari Testarossa and a James Bond movie car. We also provided a tour of the station to show off changes we recently made. Awards were given out to participants for Best of Show, Best Paint, Best American Muscle Car, Best Import and other categories based on appearance, rareness and type of car.