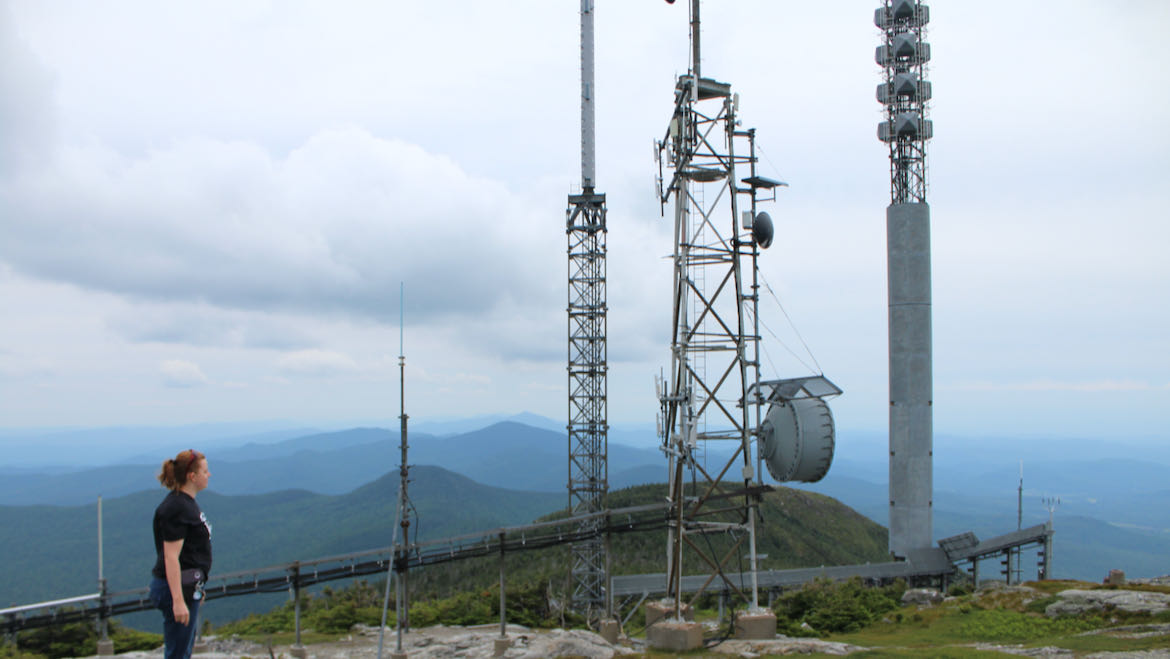 This is the first article in “Tech Transitions,” Current’s special coverage of the changing landscape of technology in public media. Look for more stories to come — and you can still send us a recommendation of your favorite tech tool for an upcoming feature.

One of Bill Fawcett’s first acts in retirement wasn’t sitting back and cracking open a cold one.

Instead, during a frigid week in early January, he climbed a transmission tower high above the mountains of Virginia’s Shenandoah Valley to repair WMRA’s ice-damaged antenna.

For a quarter-century, Fawcett joked he was the engineering department for the small public radio station in Harrisonburg, Va. With four transmitters, one translator and a full-time staff of nine, WMRA provides NPR news and talk programming to the mountainous region. Its all-classical station, WEMC, delivers signals to four counties.

WMRA started searching for Fawcett’s successor as chief engineer last September, so why is he still working post-retirement?

“We consider the first search failed,” said GM Matt Bingay. “We can’t necessarily compete straight up with a major market as far as salary. It’s just not in our budget.”

Bingay could count the number of applicants to the first search on two hands. Two candidates declined job offers because of the pay. For the second search, Bingay convinced the station’s university owner to bump up the salary to attract more potential chief engineers.

The shortage of qualified engineers isn’t confined to small stations like WMRA, though the problem is acute in rural communities. Public and commercial broadcasters, both in radio and television, are struggling to fill vacancies of these critical jobs.

The workforce of broadcast engineers — those who know to fix broadcast transmitters, tubes and wires — is reaching retirement age, according to surveys conducted annually by the Society of Broadcast Engineers. Far fewer skilled young people are waiting in the wings to take on their roles. The apprenticeships that provided training to the engineers who are now approaching retirement are increasingly rare.

New Mexico PBS is among the public broadcasters struggling to attract qualified engineering applicants. Dan Zillich, director of engineering, has posted an open broadcast technology technician position twice. Bank tellers and producers have been among more than two dozen applicants; only one candidate was qualified with the skills the station needs right away.

WUNC also needs to hire a chief engineer. Job postings have attracted a fraction of interest that the public radio station in Chapel Hill, N.C., has garnered for other open positions, said Graham Youngblood, director of IT/engineering.

Recruiters gave different reasons for their hiring challenges — the geography of their communities of service or the financial situations or priorities of their stations.

Victoria St. John, president of the Association of Public Radio Engineers, pointed to erosion of the organic apprenticeship model that provided training to early-career engineers when broadcasters were locally rooted and robustly staffed. The apprenticeships evaporated during periodic mass layoffs triggered by corporate consolidation of commercial broadcast properties and downsizings within public media. Engineers who are starting or switching their careers have found more lucrative opportunities elsewhere.

“People with that type of technical acumen are now being offered all kinds of other jobs in different industries,” St. John said. “‘Hey, let’s go work for Google.’ Or, ‘Let’s start our own podcast. Maybe design a game.’”

Plus, she said, “Young people aren’t necessarily in the position to be mentored like they used to be.”

Many stations now choose to keep contract engineers on call instead of hiring full-time staff.

On-the-job training and mentorship made all the difference for Geary Morrill, regional director of engineering for the radio broadcasting company Alpha Media and chair of SBE’s education committee. In the 1970s he worked at a small station in Lansing, Mich., and gravitated toward a more technical role. The seven engineers on staff provided the training he needed to build a career.

“I was aware of it because it was there,” Morrill said. “If you happen to be working in a situation … with a contract engineer, you don’t even see that person. How do you even learn?”

Introduced in December, the program bundles over 100 on-demand webinars on topics ranging from radio frequency technology to networking, a hard copy of the SBE Broadcast Engineering Handbook, the exam fee for SBE’s entry-level “Broadcast Technologist” certification and access to a personal mentor — all at the cost of $475.

The mentoring component is key, said SBE President Wayne Pecena, noting “there’s just so much you can learn from book.”

“This is our way to try to recreate that [apprenticeship experience] as best that can be done with some limitations of those resources,” Pecena said. Mentors will ideally work within the trainee’s organization. SBE will assist in setting up those relationships.

SBE is drawing on its collection of training resources and services to create the program, essentially streamlining the training process for broadcasters and state broadcasting associations looking to educate promising young engineers.

Station leaders may see mergers or increased automation as reasons to cut back on engineering staff, but Beach points out these changes won’t reduce the number of towers or equipment they operate.

PRSS’ goal was to recruit 15 engineers during the program’s first year, Beach said. To date, 26 engineers representing 19 stations from across the country have enrolled for the first level of training.

The Public Radio Engineers Conference, which typically precedes the NAB Show in Las Vegas in March, offers a chance to share ideas and ask advice of other engineers. APRE President St. John said the opportunity to network is the biggest benefit for engineers.

Last year, APRE expanded its scholarship program to cover all costs for six recipients to attend the conference, which was canceled due to the COVID-19 pandemic. St. John said APRE worked hard to recruit people who were new to the field or early in their careers.

APRE contacted “stations that are remote, rural [or] Native stations” and those with limited funding, St. John said. “Those were the people that we actually reached out to in our scholarship committee to say, ‘Do you have smart young people that you want to have this opportunity to learn the industry?’”

Crowds at broadcast engineering conferences trend older, white and male, said WUNC’s Youngblood. He advises hiring managers who are recruiting to do more to connect with women and people of color.

“It’s not helpful if everyone looks the same and acts the same in anything, as far as I’m concerned,” Youngblood said. “Everyone can build as many training programs as they want, but just because you build it, doesn’t mean they’ll come. There needs to be an actual reason for … people to want to do this.”

Veterans’ organizations are another option for finding qualified candidates due to the military’s use of RF technology throughout its branches, noted Zillich of New Mexico PBS.

With the challenges that digital disruption poses, radio’s inherent challenge is to “futureproof” local stations as “content-creation organizations” that distribute over airwaves and digitally. Just as the most successful journalists are comfortable working with emerging storytelling platforms, Youngblood said, the most successful engineers will combine RF know-how with IT skills of the future.

NPR’s Beach agrees training programs aren’t the whole answer. “It has to be part of a larger industry effort that requires consistent attention,” Beach said. “Stations that rely exclusively on a shrinking number of already sparse contract engineers to respond when problems occur will find themselves off the air more often as systems age.”