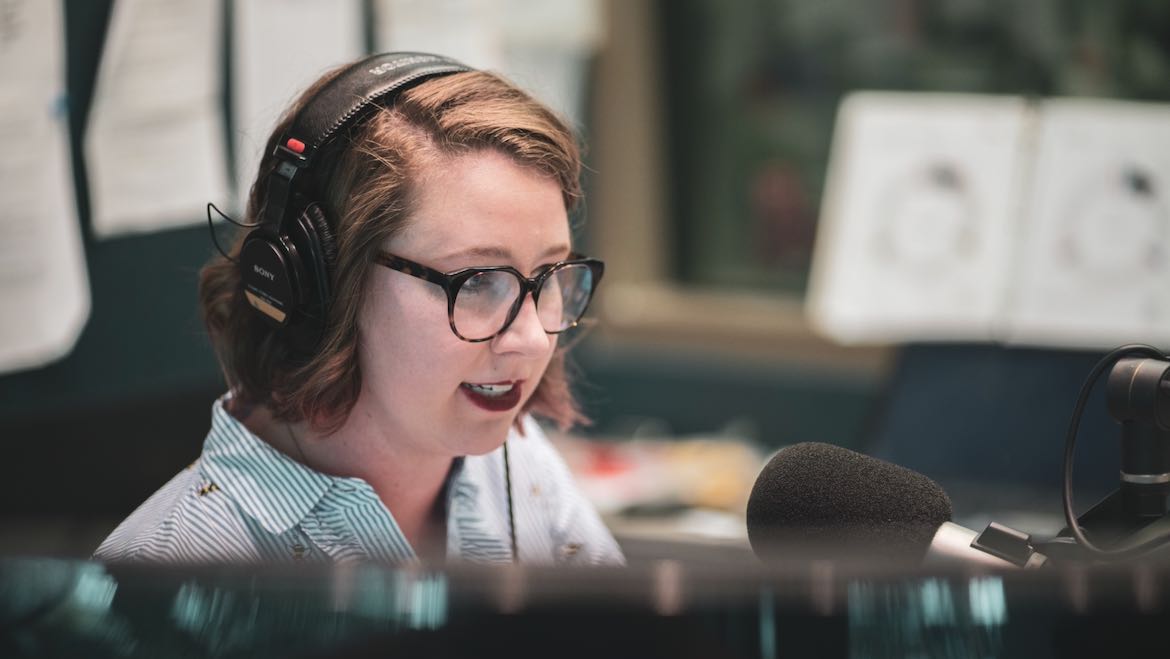 Morgan Kuehler, a part-time weekend host at KUT in Austin, Texas, and senior at the University of Texas at Austin, in the studio.

Early-career journalists are facing hurdles in gaining valuable experience in public media amid the COVID-19 pandemic, as employers suspend internships, juggle beats and shift to working from home.

For Laura Morales, a junior at the University of Texas at Austin, the transition to remote work complicated her internship with the weekday newsmagazine Texas Standard. The show is produced by a collaboration of several Texas public radio stations, including KUT, which is licensed to Morales’ university.

Morales said her work became “a lot less hands-on” after she left KUT’s offices, she said, “and I wasn’t able to have as much interaction with reporters, which took away from the experience.”

Lacking the required audio editing software, her responsibilities shifted toward producing copy for digital. Because of these complications, Morales said, she was unable to finish her final project, a fully produced segment for the show.

Laura Rice, Morales’ supervisor and managing producer for Texas Standard, said she ran into complications as well. She wanted to offer a comprehensive experience but also to be mindful of the burdens brought on by the pandemic.

Rice said lessons learned from the initial transition from office to remote work will be valuable in planning future internships. For example, she hopes to improve ways to connect with interns through their virtual workspaces and to assign staff mentors to students.

How interns are covering the pandemic

For Lucia Starbuck, who interned for KUNR in Reno, Nev., until this month, work ramped up as the pandemic worsened, and her beat eventually shifted to focus solely on the crisis.

The pandemic intensified over Starbuck’s spring break. When she returned to work, she was nervous that she’d get facts wrong.

“It was a hard transition trying to do one story at a time,” said Starbuck, who dropped stories already in production to cover the pandemic. “The week I spent off, I saw every single reporter on Twitter doing these really interesting, really cool, really impactful stories. Going into it myself at first, I didn’t even know where to begin.”

Adapting to some changes has been more difficult. Starbuck lives at her parents’ house, where she lacks software and hardware she normally uses in the office.

“My makeshift studio at my house is my closet, with this end table inside of it,” she said. “My microphone is on a stand stacked on random Harry Potter books. I have a clothes hanger that I throw a blanket over.”

Job hunting during the crisis

Morgan Kuehler, a part-time weekend host at KUT and a recent graduate of the University of Texas at Austin, faces a daunting task now confronting many other job-seekers: She has to find work within her preferred field during the economic crisis brought on by the pandemic.

Around this time of year, newsrooms across the country usually welcome summer interns and fellows. However, over the past several months these same newsrooms have announced pauses in hiring opportunities for early-career journalists in light of the pandemic.

Kuehler applied to an internship at NPR headquarters in Washington, D.C. In early April, the network informed applicants that it was canceling summer internships.

“Given the ongoing uncertainties of the pandemic, including restrictions on building access, we have decided that we will not be offering the 2020 summer internship program,” an NPR spokesperson told Current.

The situation has forced many early-career journalists to consider what their Plan B looks like. Kuehler said she’s continuing to search for her dream job at a public radio station but remains pragmatic regarding her future in the field.

“I’m still applying for [radio jobs], definitely, and hoping and praying that I get one of them,” Kuehler said. “But I also feel like it’s come time to be a little bit more realistic about my job prospects.”

KUT’s Rice offered words of comfort to early-career journalists facing setbacks. Gaps in resumes are common for recent graduates, so “I wouldn’t be so concerned about that,” she said. She recommended that aspiring reporters find ways to work on their storytelling skills outside of traditional journalism environments.

“I think that when push comes to shove, that passion is the thing that can really shine through,” Rice said.