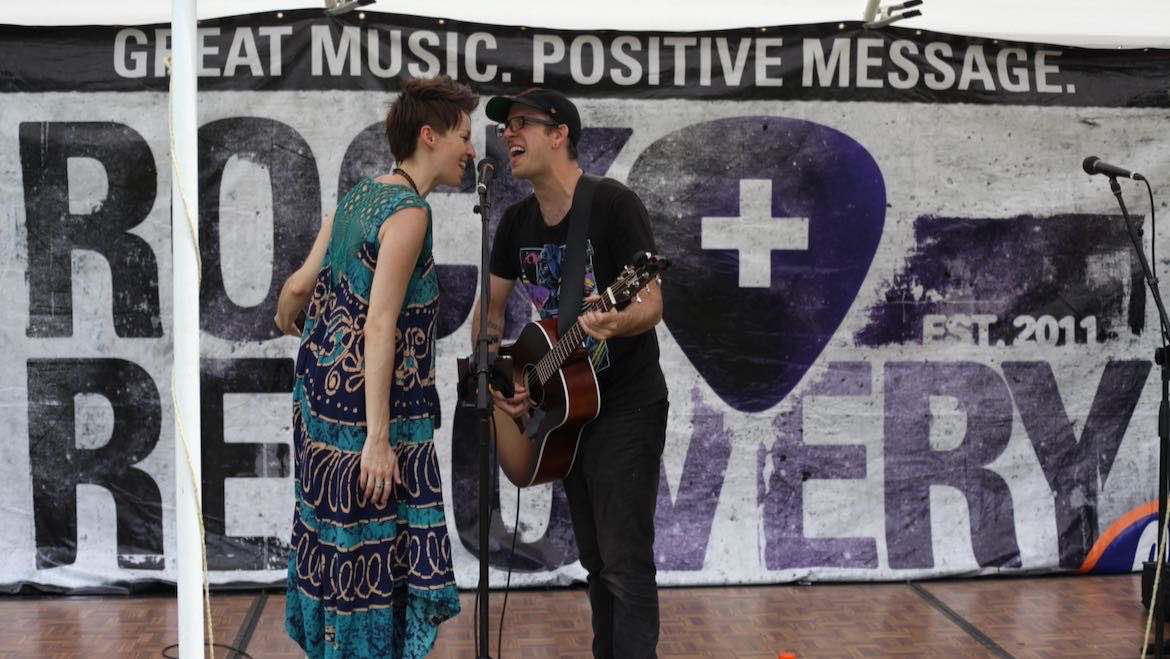 Musicians Angie Haze and Jeff Klemm perform at a 2018 concert in Akron, Ohio, for Founders' Day, a commemoration of the founding of Alcoholics Anonymous. Rock and Recovery presented the live music.

“A lot of musicians, including myself, were … closet dope fiends and alcoholics,” said Smeltz. He said he used “alcohol, heroin, crack cocaine, all sorts of pills … anything that made me feel good.”

Smeltz has written on his blog that “it wasn’t until alcohol and dope stopped working for me and started working against me that I became uncomfortable enough to think there may possibly be a problem.” He pledged to stay clean in 2001 and now helps others who are in recovery or want to get clean, themes he also takes on in his music.

In 2011, a friend told him about Rock and Recovery, a new program on a local public radio station addressing addiction and recovery through music and positive messages. That led to Smeltz performing at annual fundraisers for the show, which also airs his songs.

Smeltz calls Rock and Recovery “a great oasis” for people seeking help. “When I hear … people talking about staying clean and stuff on the station, it reminds me of why I’m staying clean,” he said.

Rock and Recovery launched in September 2011, years before the country began to wake up to the severity of the national opioid crisis now dominating headlines. With support from CPB, Rock and Recovery started as a 24/7 online stream and an hour of nightly programming on Akron public radio station WAPS, The Summit. Owned and operated by Akron Public Schools, the station airs children’s programming, local bands and pop music.

Since its launch, Rock and Recovery has expanded its on-air programming to three hours nightly from 10 p.m. to 1 a.m. It includes interviews with medical professionals, stories of personal recovery, and music chosen to uplift and motivate listeners.

The focus of Rock and Recovery has broadened to include information and messages for a national and even international audience. Its stream airs on a digital subchannel of WMVY in Martha’s Vineyard, Mass. Yet the programming remains grounded in the Akron area with local stories and events. Rock and Recovery has also expanded its focus to helping victims of trauma and people dealing with mental health issues, including depression and anxiety.

Rock and Recovery’s programming is intended to “raise awareness, remove stigma and offer hope to people in recovery,” said Garrett Hart, creator of the program and creative content director at The Summit.

Hart joined The Summit as a volunteer in 2010 after a career in commercial radio. The station’s GM asked him to help create two programs. Hart set to work on Kidjam!, a kids show featuring pop music and information about handling bullies, eating well and other topics.

Hart was at a bit of a loss for ideas for the second show. He wanted to create more programming that would have a positive impact on the community, like Kidjam!

“That’s when it was brought to my attention by a friend that Akron was the founding city for Alcoholics Anonymous,” said Hart. He was inspired to pitch a program that would support people recovering from all kinds of addictions.

“It’s something that commercial radio couldn’t get near because their job is to make money,” said Hart. “We were looking at something that was a give-back to the community.”

Rock and Recovery is meant “to be a safe place to land to hear songs that are entertaining and messages that won’t hurt you,” Hart said.

Smeltz vouches for the station’s value. Its encouraging messages can make a difference for people recovering from addiction, he said.

“It takes a lot more to get sober than listening to the station,” Smeltz said. “You have to put action into the recovery. But if I go out and do the work to stay sober and listen to the station as an adjunct to my recovery, it can very well help me through some difficult times.”

Smeltz’s song “Surrender” from his most recent album to be featured on Rock and Recovery addresses the most painful aspects of recovery. “I get so tired holding on / Seems my desires cause me harm / All that appears as good to me / Keeps me stuck in misery,” Smeltz sings.

Listeners to Rock and Recovery hear songs by Smeltz and other local performers alongside music by higher-profile artists, such as “Someone Saved My Life Tonight” by Elton John.

Stories about recovery submitted by listeners air between songs in My Recovery Rocks segments. Positive messages shared with Rock and Recovery’s audience include “Let go of the thoughts that don’t make you strong” and “You don’t just choose recovery, you have to keep choosing recovery over and over again.”

Mental Notes segments include interviews with Akron mental health professionals, helping listeners learn about resources to aid their recovery and reviewing topics such as mindfulness and access to local support services.

“When you have a theme around recovery and helping people with substance use, I think it brings the community together,” said Gerald Craig, executive director of the County of Summit Alcohol, Drug Addiction and Mental Health Services Board in Akron. Craig’s organization has collaborated with Rock and Recovery on community events since the program’s launch. It also buys ads to direct listeners to recovery organizations.

“Music and individuals in the music world who have struggled with addiction and come out on the other side of it, who’ve gone on to create art and music, are just a wonderful example” to people dealing with addiction, said Craig. It shows current and former substance users that they are still valued parts of their community and that recovery is possible, he said.

Hart said that though the programming is not the only service listeners in recovery will need, he hopes it provides them with a valuable tool, whatever challenges they face.

“We have no delusion that we’re going to cure addiction or that we’re going to solve mental health problems,” said Hart. “But we can travel with people as they’re experiencing their recovery to offer a positive message and to let them know they’re not alone.”

“When we look at solutions for addiction, there is no one-size-fits-all approach, but there is a common thread, and that’s education — something public media is uniquely positioned to provide,” Harrison said. “This is a great opportunity for us to look at the growing power and effectiveness of public media’s connection to community and why it matters.”

A Recovery Minutes segment featuring excerpts from interviews with celebrities, therapists and authors is available for use by stations. The Summit is also developing a syndication model for an hourlong Rock and Recovery show for college radio stations in northeast Ohio.