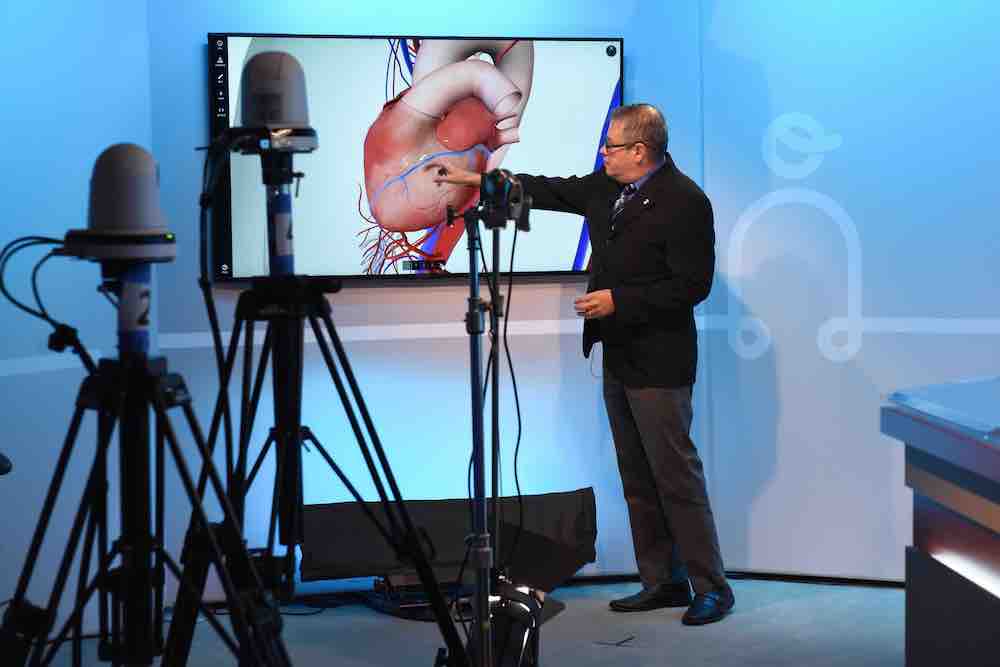 Dr. Jose Soza of Baptist Health discusses heart issues on the set of the Health Channel.

The Health Channel premiered Aug. 7 as the only 24/7 health and medical information channel in the nation, according to the public broadcaster. The project is a partnership with Baptist Health South Florida, which supplies the medical experts.

With the motto “All Health All the Time,” the channel broadcasts from a studio inside a Baptist hospital in Coral Gables that’s staffed by a South Florida PBS production team. The pubcaster hired four producers for the project among several new employees, and expects to hire more.

Viewers are invited to call the studio with their health questions or submit email queries through the website. Non-hosted short videos with medical experts discussing relevant issues — such as summer-season challenges of heat-related illnesses and water safety — are archived online.

In an announcement of the channel’s launch, South Florida PBS President Dolores Sukhdeo called the initiative “unique and pioneering.”

“Nationwide, there is increasing concern about access to medical experts and information,” Sukhdeo said. “Our diverse and growing South Florida communities are particularly impacted by this concern.”

The pubcaster heard of that need first-hand from viewers during community listening tours, EVP Bill Scott told Current. “The idea for this channel came directly from the people,” Scott said. “During virtually every listening session, matters of health and well-being and access to medical experts came up.”

The interactive component was important, Scott said, but medical experts won’t be offering advice. “They may recount to callers a similar experience they had with a patient, but they won’t be advising them,” he said. “And they will always tell callers to check with their family physicians.”

Since the launch, at least one caller has followed up by scheduling an appointment with a physician who appears on the channel, Scott said.

Scott declined to discuss financing for the channel, or whether  Baptist is sharing the costs. “We’re doing what public television has done for a long time, and what we’ve done for 63 years,” he said, looking for underwriting and grants.

The Health Channel is getting a hefty promotional push on the air and on social media, as well as in a paid campaign that includes print ads, posters in the public transit system and digital billboards on I-95. Baptist is also promoting it “within its universe of media contacts,” Scott said.

Clearing channel capacity for the new channel presented a challenge, Scott said. Its multicast offerings of Create, PBS Kids, World Channel and the Florida Channel were “all excellent,” he said.

Previously the stations split one channel between the legislative Florida Channel and the public affairs oriented World. When the state legislature goes back in session, the station will “find room” to continue to carry that coverage on the Florida Channel, Scott said.

“In our listening sessions in communities across south Florida, the public made their priority loud and clear: They needed and wanted access to health information and medical experts,” Scott said. “Taking many factors into consideration we made the tough decision to replace the World service with the Health Channel.”

Scott said the South Florida PBS leaders see the channel as a public service. “It’s like the electric company: When you turn on a light switch, you are confident you’ll get light,” he said. “You can leave it on as long as you want. The next time you need it, it’s there. So this is like a health public utility.”

2 thoughts on “It’s ‘All Health All the Time,’ and four hours live, on new Florida multicast”