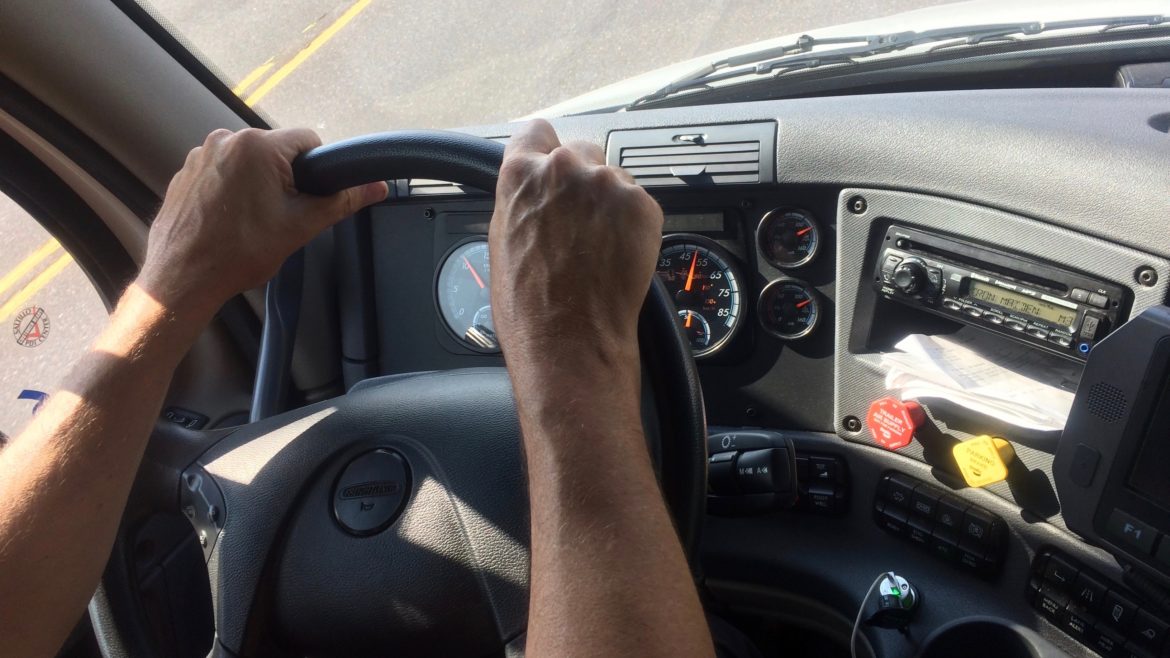 In July last year, long-haul truck driver Stephanie Klang got a rare speeding ticket because she was too engrossed listening to public radio.

She told the state patrolman that yes, she knows listening to the radio is not a valid excuse, then proceeded to tell him all about the radio show that took her mind off her speed — an episode of BackStory about the history of taxes in the U.S. after the country had just broken away from England.

Klang has been a truck driver for 37 years, going through all 48 contiguous states, and she listens to public radio all the time. She said she used to have a small booklet listing all the public radio stations in the country, which she got as a gift for pledging support.

“I used that book until it absolutely fell apart, and I wish I’d ordered two of them now,” she said.

After years of listening, she has memorized some local stations — for example, 90.1 in Dallas and 90.7 in St. Louis. 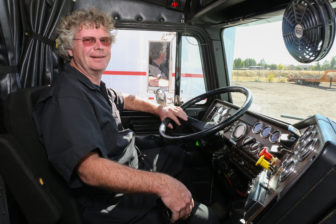 She’s not the only truck driver who listens to NPR — far from it, according to Finn Murphy, who has been a long-haul trucker for more than 30 years.

“Every single driver I’ve ever talked to listens to NPR,” said Murphy.

He recently published The Long Haul, a book about his experiences. “If I can, I’ll schedule my driving to catch Fresh Air with Terry Gross,” Murphy wrote. “ … I’ve got a little crush on Terry, actually. It’s probably because I’ve spent more time with her than anyone else in my life.”

I read the book and interviewed Murphy for a story about the future of the trucking industry, and that part of the book got me curious. Why do truckers like NPR? They probably don’t fit the mold of the “business leader,” “educated lifelong learner” or any of the profiles described by National Public Media. And most people probably don’t think “trucker” when they envision the typical public radio listener. So what can truckers tell us about what public radio knows about its listeners and how we could serve them better?

Murphy writes that even if truckers “may not like the slant, if there is one,” they still listen to public radio. A few years ago, he was sitting at a truck stop coffee counter with a driver who was a Ku Klux Klan member. Murphy asked the other driver if he listened to NPR.

“He said, ‘Oh god, yeah, ‘US Jews and Girls Report.’ I said, ‘Well, what do you mean?’ He said, ‘Well, all the commentators are Jews … and they’re always talking about women’s issues. It drives me crazy.’”

“And I said, ‘Well, so why don’t you stop listening?’” Murphy continued. “And he says, ‘I can’t, because it’s the only station that will go on mile after mile and I can pick it up again.’”

Aside from the content, according to Murphy, drivers like NPR for the continuity. They can keep listening to the same programs from state to state.

They also like NPR because they’re bored, he said, even if a Klan member is listening to a show about Black Lives Matter or transgender people.

“Even if that’s not important to you, that discussion … you’re hearing on the radio is still a whole lot more interesting than anything else you’re going to find on the radio,” Murphy said. “If you want to get excited and exercised and activated about different points of view from yours, that also makes the miles go by.”

Fred Manale, a 55-year-old trucker from Louisiana, said he listens to public radio, though he finds it “disturbing.” For example, he said NPR should not be blaming President Trump for having a connection to Russia.

“It’s almost like the last thing you can listen to, and then when that runs out, then you find something else to listen to,” Manale said.

“They’re like, ‘Really? Truckers listen to NPR?’” he said. “I’m like, ‘Yeah, every frigging trucker listens to NPR.’”

Not all stations are oblivious to the audience. WNYC’s Brian Lehrer Show has definitely taken calls from truckers over the years, said EP Megan Ryan. And NPR spokesperson Isabel Lara wrote in an email that “it’s high praise when truck drivers — who spend long hours on the road and do more listening than just about anyone else — say they listen to NPR.” She added that NPR’s listener services department does hear from listeners who identify as truckers, some of whom scan for NPR stations as they travel across state lines. 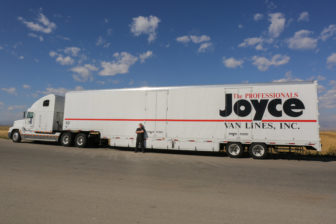 Murphy and his truck.

Murphy said that though he likes NPR, stations could do more to appeal to drivers. For example, he said stations doing pledge drives could consider giving a shoutout to drivers and see whether they can contribute.

In his book, he wrote that “it would be incorrect to think that truckers constitute some harmonized bloc of redneck atavism.”

Ray Hollister discovered public radio when he was a long-haul truck driver for a year in 2002. Now the general manager of an IT company, Hollister said the network needs to “speak more to the flyover states. … Do stories that affect more people than just the coast.”

“Truck drivers come from across America,” he said. “They’re a pretty decent cross section of America. I knew a ton of white, black, Asian, Hispanic truck drivers, and the only thing we had in common was that we were all truck drivers.”

If people in public radio are surprised that truck drivers listen to their stations, the system has a blind spot, said John Sutton, general manager of WESA in Pittsburgh and an industry consultant in programming, marketing and research. When people in public radio look at research and talk to potential underwriters and foundations, Sutton said, they focus on how public radio listeners are different — how they’re well educated and more likely to volunteer and engage with the arts.

“Those things are important, but … we often blind ourselves to how similar our listeners are to the average American,” Sutton said. “There are a lot of people who listen to us who don’t have college degrees, and we just don’t focus on those people in a lot of our discussions.”

Sutton pointed out that, according to a GfK Mediamark Research & Intelligence survey conducted this year, the percentage of NPR news listeners who gambled in the past year is almost the same as the percentage who went to the opera or performances of classical music. They’re also just as likely as the average American to donate to religious organizations.

People in public radio making content and programming decisions should think “as much about what public radio listeners have in common with the average American, instead of what the differences are,”  Sutton said. “… [T]here are lots of truck drivers that are curious about the world, and they’ve got a lot of time to listen.”

41 thoughts on “Love it or hate it, truckers say they can’t stop listening to public radio”