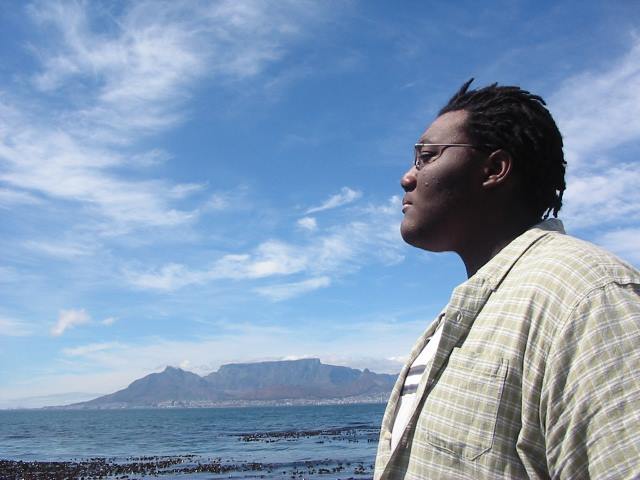 Nonso Christian Ugbode, director of digital initiatives for the National Black Programming Consortium, died Monday in New York City after a long, undiagnosed illness. He was 34. This remembrance of Ugbode was contributed by Jacquie Jones, former executive director of NBPC.

“I’m a writer at heart, a born communicator, and my passion and dedication often goes to figuring out the bigger picture — connecting people and perspectives. Stories are my life’s work, I believe, and I’ve dedicated myself to learning to shape words and images in many forms to make the most vibrant stories I can.” — Nonso Christian Ugbode

We in public media like to say that we’re “like a family.” We joke that this is because our parents are always fighting, and we never know when the lights will be turned off.

But really, we are like a family because of the complex and invigorating challenges that this work demands. It’s no simple thing to balance a vast American population’s need for access to a public media that explores the histories, cultures and experiences that shape our lives and destinies with the urgent mandate to cultivate and nourish artists and storytellers who can preserve and make meaning from them. It takes commitment and love and trust. It takes staying in the conversation past the yelling into the quiet understanding that change is hard work, and it binds us together in ways nothing else ever could.

If you knew Christian, as we called him — his mom called him Nonso, but usually only when he was in trouble — then you knew what that quiet commitment to change actually looked like. In his too-short 10-year career in public media, he changed the game, whether you know it or not, whether he knew it or not. He was a musician, a filmmaker, a digital innovator, a podcaster. He knew that “platform” and “television” and even the more hip “content” were all just words, words that meant story. And he knew that stories are the real currency of the only public square we have left — the media.

Christian walked into the National Black Programming Consortium in the spring of 2006 to interview for a job as a programming assistant. YouTube was just a year old, and our shelves at that time were still lined with videotapes. Leslie Fields-Cruz, the current executive director of NBPC, and I wanted to make a DVD as a giveaway at the upcoming PBS Annual Meeting with a funky interface and a “hip” ’70s kung-fu vibe. Christian sat there, waiting very patiently for his interview to begin, as Leslie and I discussed the pros and cons of this very odd idea. He finally piped up and said, “I could probably figure out how to do that.”

From that moment until Monday, June 20, 2016, when he left us, he was always figuring it out. Our kung fu–themed “Instant Black Programming Kit” was followed by our revamped blackpublicmedia.org online presence, our foray into virtual worlds and, of course, the immensely impactful New Media Institutes and NMI Africa which brought new audiences to our work from around the world, all under the guidance of Christian, ultimately, as NBPC’s Director of Digital Initiatives.

“It seems almost quaint now, but 10 years ago there were only a handful of us that really got the tremendous potential of digital to change the landscape of public media. Christian was one of them,” remembers Jake Shapiro, c.e.o. at RadioPublic and formerly executive director of PRX. “Through really cutting-edge partnerships between PRX and NBPC, we were able to get some game-changing stuff happening because of him. It was just a stroke of luck that he also happened to be the sweetest guy on earth and an underground rocker like me. We’ve lost a giant.”

“I was tremendously saddened to learn of the passing of Christian Ugbode,” adds Paula Kerger, president and c.e.o. of PBS. “He was one of his generation’s great minds and brought fresh ideas and new energy to public media. We are very grateful for his tireless advocacy for diverse voices and unique perspectives in public media. He will be deeply missed.”

Born in a small village west of the River Niger in Southern Nigeria, an idyllic locale, Christian always recalled Illah with much nostalgia and contrasted it with the chaotic rhythms of his adopted home in New York City. A second-generation immigrant to the United States, he arrived in Bed-Stuy Brooklyn at age 15 and immediately wanted to return home. “The weather was too cold, and all the meat tasted strange,” he said.

But he adapted, spending his creative energy trying to understand and explore that adaptation, the fierce and universal drive that allows all of us to thrive in new spaces even when they challenge our identity. “How do we define ourselves to ourselves?” he asked, “and to the world around us?”

“Christian wasn’t just talented. He was warm, kind and beautiful. … His genuine personality touched all who knew him.”

Christian was a writer, producer/director, musician and a graduate of the New York University Tisch School of the Arts, where he studied film and television. In 2005 he directed an off­Broadway production of the classic Rebel Without A Cause commemorating the fiftieth anniversary of James Dean’s passing. Later that year he would write and direct one of the very first web series pilots, Kindred, an ensemble sitcom-type show set in a Brooklyn brownstone.

He produced Colored Frames in 2007, an expositional documentary featuring black artists such as Ed Clark, Howardena Pindell and one of the very last interviews with the legendary Benny Andrews. Clips from the film were ultimately part of a video memorial at Andrews’ New York celebration of his life. The documentary was well­received and continues to broadcast on American Public Television and the World Channel.

CPB’s former senior vice president of television and digital content Jennifer Lawson summed up his impact quite eloquently: “Christian had that rare combination of artistic talent, witty intelligence, technology know-how, and passion.  His passion and drive seemed to emanate from his pride in the works of people of African heritage and his desire to make those works as visible as possible on the global stage, and he did just that.”

“He had this very unique ability to take my typewritten notes filled with loose ideas, quickly process them, and then translate my vision to something even I couldn’t see,” says award-winning producer and collaborator Byron Hurt. “But Christian wasn’t just talented. He was warm, kind and beautiful. He was authentic and very comfortable in his skin. His genuine personality touched all who knew him.”

For us at NBPC, past and present, Christian was a visionary, always at home in the world of creativity and ideas. He entered public media at precisely the moment that the system was shifting to a new, digital world that promised inclusivity and innovation. And Christian was on the front lines of that transformation. Whether his colleagues know it or not, his contributions continue to create opportunities for makers of color on every platform. But more than anything for us, Christian was our brother. The hole that’s been left by his passing can never be filled. We loved him.

Christian transitioned from this life at NewYork-Presbyterian/Columbia University Medical Center after a long illness. He is survived by his incredible mother Maryann Ugbode; two sisters, Munonyedi and Billie Ugbode; a brother, Nicolas Ugbode; and countless aunts, uncles, cousins and NBPC kids.

You can make a donation to assist the family in returning Christian to Nigeria so he may realize his dream of resting in peace in Illah.

Jacquie Jones is the former executive director of NBPC. Like Christian, she is a Taurus.