Filmmaker Ken Burns precisely recalls a moment of spontaneous inspiration that resulted in his first landmark documentary series for PBS.

On Christmas Day 1984, he finished reading The Killer Angels, a Pulitzer Prize–winning historical novel by Michael Shaara about the Battle of Gettysburg.

“I remember closing that book and telling my father, ‘Now I know the subject for my next documentary. It’s going to be the Civil War.’” 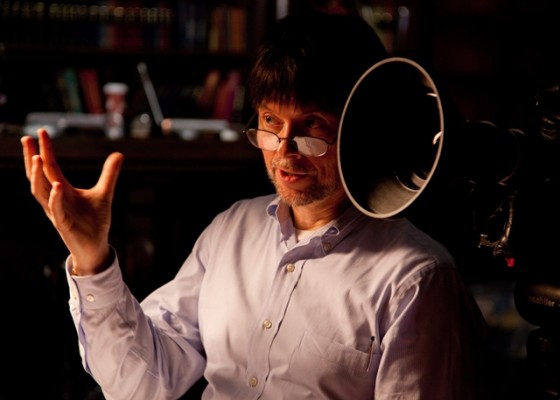 Burns on the set during filming for The Roosevelts, his series that launches PBS's fall 2014 season. (Photo: Daniel J. White)

Burns’s next film for PBS, The Address, debuts April 15. As a 90-minute contemporary film presented as a standalone special, it doesn’t fit the mold of the filmmaker’s typical multipart productions. Yet it draws on historical themes and American values to tell the story of learning-challenged students at a small Vermont school who are encouraged to recite Abraham Lincoln’s Gettysburg Address as a rite of passage.

Burns was drawn to this film subject as a neighbor of the Greenwood School of Putney, Vt., located just across the river from his home in Walpole, N.H.

A decade ago, Burns served as a judge of the students’ recitations. “I just wept and said, ‘Well, somebody should do this. This is cinema verite. I do something else.’” Eventually, though, he decided to produce the film. “It was a thrill to do it. As a father of four daughters, to get to sort of adopt 50 boys was terrific.”

Beyond Burns’s upcoming PBS special, the pipeline of forthcoming documentaries from his Florentine Films is robust, diversified and extended, encompassing multipart series to be delivered over the next four years.

He has guidelines to help choose among competing subjects, including his level of enthusiasm and how warmly other members of his creative team embrace an idea. His inner circle of collaborators includes writer-producer Dayton Duncan, writer Geoffrey Ward, director-producers Lynn Novick and Sarah Botstein and, more recently, daughter Sarah Burns and her husband, David McMahon, producers of the 2012 feature film, The Central Park Five.

“We sit around; I’ve got a list; they’ve got a list; we talk together,” Burns says of the selection process. “Light bulbs go off. Exclamation points happen. And then we go to PBS.”

The arrangement has worked well for years, according to Beth Hoppe, PBS chief programmer. “Ken has such an amazing track record,” she said. “When a producer is that successful — and he raises money from a variety of different sources — I would hesitate to try to be prescriptive at all. Why would I be?”

Burns’ success — as a storyteller, a historian and ratings magnet — is as remarkable as it is consistent. The Civil War attracted nearly 40 million viewers during its initial run in 1990. Four years later, Baseball brought in 45 million viewers. Though last year’s four-hour The Dust Bowl drew much smaller cume of 17 million viewers, it averaged a 4.91 national household rating across the two parts, more than double the PBS primetime average for the fall 2012 season in which it aired, according to PBS Research.

“I’ll be honest,” Hoppe said. “I was a little surprised at how wildly successful The Dust Bowl was. That really hit a chord. And it particularly hit a chord in the center of the country that was most affected by the Dust Bowl. The ratings were off the charts, absolutely the highest-rated thing on television in parts of Oklahoma and Texas.”

Following The Address, a comparatively small project, the next full-size work to land on PBS is The Roosevelts, an intimate history of the remarkable family that included two presidents and a first lady who operated outside of her husband’s shadow as a politician in her own right.

PBS will give The Roosevelts full exposure as the tentpole series launching its fall 2014 schedule. Beginning Sept. 14, episodes in the seven-part, 14-hour series will roll across PBS primetime, debuting as two-hour installments at 8 p.m. and repeating at 10. The double-pump schedule configuration will put Burns’s documentary up against new fall series from the big commercial networks.

No shrinking violet when it comes to marketing, Burns describes The Roosevelts as “the best thing we’ve done.” He compares it to PBS’s other ratings winner, calling it “America’s Downton Abbey.”

Meanwhile, his team at Florentine Films has begun editing Vietnam, slated for air in 2016 or 2017, and started shooting Country Music, which will land on PBS in either 2018 or 2019. At the request of WETA President Sharon Percy Rockefeller, Burns is executive producing a series on the history of cancer, planned for a spring 2015 debut.

Burns was drawn into that production through his personal connection to Rockefeller, with whom he has worked for 30 years, and his own family history. Burns’s mother died of cancer when he was 11, and Rockefeller is a cancer survivor. “She just sort of said, ‘You’ve got to do this.’”

Is there a common thread in these films and others that have passed through the pipeline, including Jazz, The National Parks, Horatio’s Drive, Thomas Jefferson, Brooklyn Bridge, Lewis & Clark, The West, Unforgivable Blackness, Frank Lloyd Wright, The Shakers and Prohibition?

Burns points to one question that’s at the center of each of his films: Who are we Americans as a people? “Each film offers another opportunity to pursue this question and, while never answering it fully, nevertheless deepens the question with each succeeding project,” he said.

As one of PBS’s most famous talents, Burns is bombarded with suggested film topics from Viewers Like You.

The most popular request is for a film about railroads, but that subject has figured into too many of his previous films to be taken up again.

Burns has yet to document any of America’s historical trials, such as Dred Scott or the Scopes Monkey Trial, despite the built-in conflict and drama. The closest he has come was The Central Park Five, which was more about law enforcement than jurisprudence. Burns, a fan of Law and Order and its TV cousins, is not yet sold on a film about a trial.

Nor is he concerned about whether his work might intersect topics on two other respected PBS series, American Experience and American Masters.

“I started well before American Experience,” he said, noting that he turned down an offer to be the original director of the series. “I don’t ever look up and see what they’re doing, and I assume they don’t look up to see what I’m doing.”

If producers at the WGBH-based history series did, they might see something in the future related to crime and punishment or maybe the history of invention and technology.

Or maybe a biography of Brigham Young or a film on the Mormons, a topic that American Experience and Frontline took up together in 2007 and that Burns touched on in his 1996 series The West.

Burns said he is weighing all of these topics as he looks to stock his pipeline for the 2020s.