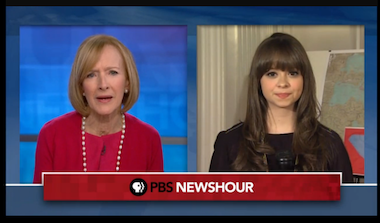 A transformed West Virginia Public Broadcasting stepped up Jan. 9 with extensive multiplatform coverage of the toxic waste spill that affected the water supply of more than 300,000 state residents and grabbed headlines nationwide.

Reporters camped out at the network’s Charleston headquarters around the clock to deliver continuing coverage over the air and via social media and its recently upgraded website. “Because we are a state agency, what we are called to do is to be the state’s go-to source for emergency information,” WVPB reporter Ashton Marra said. “We needed to fill that role between the state and the public.”

The network’s TV show covering state government, Legislature Today, scored an exclusive interview with Governor Earl Ray Tomblin. When Tomblin’s office called WVPB for help with a live stream of a press conference, the network’s video crew was ready to pitch in alongside for-profit satellite provider The Media Center. Marra appeared on The Takeaway, To the Point, NPR’s newsmagazines and PBS NewsHour.

WVPB’s coverage of the crisis stood in marked contrast to its response to a powerful derecho storm in June 2012 that left more than 600,000 West Virginians without power. At the time, WVPB lacked a digital division and had fewer news staffers on hand to cover the crisis, and power outages left reporters unable to access the network’s server to file stories. These setbacks prevented WVPB from airing any coverage of the storm until three days after it hit. During the weekend, WVPB posted only an emergency bulletin from the governor on its website.

Since that storm, WVPB has undergone significant changes. The network’s General Manager, Scott Finn, worked with network editors to create a tiered emergency coverage plan calibrated to the severity of threats West Virginians might face, ranging from storms and tornadoes to chemical leaks and coal-mining accidents.

Key to the network’s ability to respond to breaking news is its increased use of Twitter and a website that allows for quicker and easier posting and updating, Mistich said. The network used NPR’s Core Publisher to cross-post other public radio coverage of the crisis from across the region, including from Kentucky’s Louisville Public Media downstream from the spill. Some stories found a national audience through NPR Digital Services’ geotargeted Local Stories Project.

WVPB’s new editorial and digital bandwidth did not come easily for a network that has faced what Finn called “an atmosphere of shrinking resources” over the previous five years.

State support for the network has declined from $6.8 million in fiscal year 2009 to $5.5 million in FY 2013. Legislators have approved additional funding cuts of 7.5 percent for fiscal years 2014 and 2015 as well. Funding from West Virginia’s government makes up half of WVPB’s budget.

To strengthen its news coverage, WVPB has cut its operations, engineering and master control departments and built digital staff by redirecting employees from other areas. Finn also took advantage of several top-tier executive departures that occurred before his arrival, freeing up salary dollars and allowing for positions to be consolidated.

The increased reporting effort has paid off. WVPB’s website experienced more traffic on the first day of the waste spill than it gets in a typical month. In the four days following the spill, the site saw 67,000 visits and 107,000 pageviews from 58,000 unique visitors. Before its redesign, the site averaged 37,000 visits and 65,000 pageviews a month from 25,000 unique visitors.

The network will host a free public taping of its flagship music program Mountain Stage Jan. 19 to help residents take their minds off the spill. When Mistich got to work on the morning of Jan. 12, two days after the spill, a woman was waiting outside the door to personally thank WVPB for its coverage.

“She didn’t know where to go to thank someone, so she showed up at the station,” Mistich said.