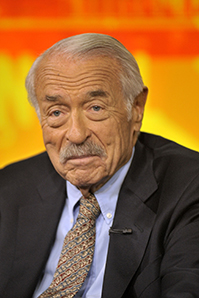 Richard Heffner, the founding g.m. of New York’s WNET/Thirteen and longtime host of the public-affairs program The Open Mind, died in his New York home Dec. 17 of a sudden cerebral hemorrhage. He was 88.

Heffner began his career as a radio reporter for NBC and ABC and moved on to become a director of special projects for CBS’s television operations. He began hosting The Open Mind, a weekly half-hour interview series, in 1956 for commercial TV. After helping to launch New York’s first public TV station in 1961 while on leave from CBS, Heffner served as WNET’s first g.m. until 1963.

“He was the George Washington of Thirteen,” said Neal Shapiro, the network’s current president.

Shapiro noted that Heffner oversaw and produced much of the early news, arts and public affairs programming that molded WNET’s identity. “Now you’d say it’s in our DNA, but he was in charge of designing the blueprint and building the foundation,” Shapiro said. “We’ve all stood on his shoulders.”

Heffner continued to host The Open Mind, distributed nationally to public TV through American Public Television, until his death. He interviewed significant historical figures, including Malcolm X and Jimmy Carter, and compiled many of his interviews into the oral-history book As They Saw It.

Heffner was also a professor of communication and public policy at Rutgers University for nearly 50 years. He co-authored A Documentary History of the United States, an account and interpretation of the country’s most significant historical documents. He served as chair and administrator of the Motion Picture Association of America’s ratings board from 1974 to 1994 and lectured overseas about media and American history for the U.S. State Department.

Shapiro interviewed Heffner for the network’s retrospective series Pioneers of Thirteen, which will include a remembrance in its final installment, airing tonight.

Heffner is survived by his wife Elaine, sons Daniel and Andrew and grandchildren Alexander, Jeremy, Zachary and Sophia. In lieu of flowers, his family requests that donations be sent to WNET with specification that gifts are for continuing production of The Open Mind, which the station will continue producing with a new host.