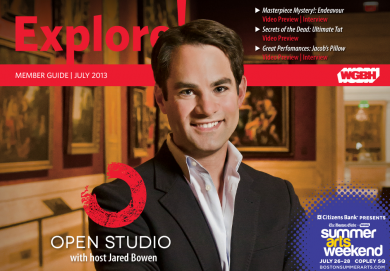 As consumer use of tablet devices continues to rise, more public media stations are moving onto the platform with supplementary content and increasingly ambitious niche apps.

The latest survey of tablet ownership from the Pew Research Center’s Internet & American Life Project, published June 10, found that 34 percent of adult Americans age 18 or older own a tablet computer, nearly double the percentage recorded last year. Additionally, nearly half of all college graduates and 56 percent of adults who make more than $75,000 per year own tablets.

The open canvas of a tablet, much like that of a mobile phone, has been interpreted differently from station to station. Several have developed or outsourced lo-fi, low-cost apps meant mainly as auxiliaries to the on-air viewing experience. Public Radio Exchange C.E.O. Jake Shapiro, whose design team developed apps for several large stations, thinks this approach is a mistake.

“If you’re going to do tablet . . . we’re arguing to have a commitment to do something distinctive,” Shapiro told Current. “It’s not an ancillary item on a checklist of digital presence. It actually is a really significant investment.”

Native tablet apps may not always be the best investment for stations, Shapiro acknowledged. For example, radio stations may serve their brands better by pursuing mobile phone apps instead. But, at the very least, stations should make sure their websites have a responsive design that is optimized for tablets and smartphones, he said.

Shapiro sees similarities between tablet apps and live-performance venues that stations in many cities have built within their facilities: Both fall outside of public broadcasting’s traditional mission, but represent new ways to convene audiences and build community engagement around their content.

But others advise news outlets not to delay in creating content for tablets. As more consumers adopt tablets and similar devices, their media habits and expectations will change, said Sara Quinn, visual journalism faculty member at the Poynter Institute.

A 2012 study on iPad news consumption that Quinn co-authored identified a sizable majority of tablet users as “intimate” readers who frequently look for ways to interact with the screen. Quinn first presented study findings during this year’s South by Southwest Interactive festival in Austin.

“I think desktops are probably going to go away and people are going to want [to take] their information with them,” Quinn told Current. She considers smartphones to be just as important for news media outlets as tablets.

“I think it’s a venue that people need to be at now, because it’s going to become even more dominant, and you don’t want to be so far out of the game that you’re behind.”

Here is a sampling of the latest tablet initiatives from public media stations.

San Francisco’s KQED was looking to add interactivity — for both its audience and its city — to its digital offerings when it designed Let’s Get Lost. The app uses GPS functions to take users on virtual tours of three historic locations in the city — Coit Tower, Rincon Annex and the Pan American Unity mural at City College of San Francisco. Let’s Get Lost launched in January for iPad, iPhone and Android phones, and invites users to play a virtual scavenger hunt with the app.

As of this month, Let’s Get Lost had been downloaded 2,500 times, according to Colleen Wilson, executive director at KQED.

The station drew material for the app from a variety of sources, including the Smithsonian Institution and its own archives, and conducted original research that was backed by a grant from the National Endowment for the Humanities.

Let’s Get Lost was initially envisioned as a more traditional, KQED-led city tour, according to Wilson. A KQED multimedia team began collecting information on local New Deal–era murals more than five years ago; later, the station decided to compile its data onto tablets and phones.

To distinguish Let’s Get Lost from KQED’s other digital offerings, the station contracted with local design firm Bayinteractive, Wilson said. KQED wanted outside minds to create a different look and feel for it.

“The app needed an entirely new approach,” Wilson said. “One of the smartest things we did was to make a deal with Bayinteractive that, if ever we fell into that groove [of traditional apps], they would pull an ‘intervention.’ We did, and they did twice. And the app is much better for it.”

KQED is continuing to develop its tablet strategy and plans an arts-focused application that allows users to find information on local arts events and explore curated arts content from a variety of San Francisco media outlets.

The app, funded with assistance from the National Endowment for the Arts and the William and Flora Hewlett Foundation, is scheduled to launch next year, Wilson said.

KCRW’s Music Mine app streams music curated by the station’s deejays. It is available on iPad, iPhone and Spotify. (Photo: KCRW)

Music Mine, one of the first native iPad apps created for a public station, was developed by PRX in 2011 for KCRW of Santa Monica, Calif. The app was designed to extend KCRW’s brand of eclectic music programming for users of iPads, the music streaming service Spotify and, as of June 10, iPhones.

The app facilitates music discovery. In addition to presenting new music curated by the station’s deejays, it allows users to learn more about featured artists. It also offers an entry point for streaming the KCRW all-music channel, Eclectic24.

The app has been downloaded to iPads 65,000 times, and has built a base of 6,000 to 8,000 active monthly users, according to Betsy Moyer, director of digital content strategy. Two years after its launch, the app still sees 2,000 to 3,000 downloads per month.

Though the app streams music curated by KCRW deejays, its system uses algorithms to search the station’s archive of playlists, so humans don’t operate it.

Developers of The Echo Nest, the platform Music Mine was built on, have since disabled the parts of the software that the app relied on, so Music Mine couldn’t be built now, Moyer said. However, The Echo Nest’s inability to support Music Mine doesn’t affect the app’s performance.

Boston’s WGBH chose to convert its monthly members’ guide into iPad-friendly PDFs embedded with hyperlinks to streaming video and other content on WGBH.org. According to Steve Baker, senior director of creative projects, the app plays to a key strength of the tablet platform — promoting and supplementing broadcast television.

“Usage studies have shown that more than 80 percent of people who own iPads use them while watching TV,” Baker said. “This is where public TV needs to be if we want to promote programs and add additional content on the platform.”

To import the WGBH Explore! print members’ guide to the iPad, the station’s creative staff use the enterprise version of Adobe’s digital publishing software. Each monthly guide compiles low-resolution PDFs and provides links to online videos and broadcast schedules. Designers also include promotional materials related to upcoming feature programs, such as an interview with The Central Park Five co-director Sarah Burns. Members can opt to sign up for a digital newsletter that alerts them when a new edition is available for download.

The monthly magazine repurposes feature material that has already aired on OPB’s radio or TV stations, combining it with text-based presentations previously published online, such as reporting from EarthFix, the environmentally focused regional journalism center based at OPB. Although the content is adapted from other platforms, the glossy digital presentation is all new, incorporating modern design aesthetics and heavy use of multimedia.

“We knew that we had a lot of digital content, and we knew that much of our audience did not see all the content that we produced,” Lynne Pollard, v.p. of new media at OPB, told Current. The move to the iPad was easy to plan, she said, because the state network began developing capacity to produce multimedia journalism years ago.

Each monthly edition of OPB Magazine generates about 1,000 downloads. Once an individual iPad owner signs up for the free subscription, he or she receives a notice whenever a new issue appears in the iTunes store. Pollard talked up OPB Magazine to a roomful of public media executives during a session at the Integrated Media Association conference in early March in Austin, Texas, and emphasized how the OPB team was able to publish the iPad magazine with the addition of one full-time staffer.

OPB President Steve Bass recruited Jason Bernert from the University of Oregon, where he worked on a student-run iPad publication prior to graduating in 2011. Bernert joined OPB right out of college as manager of the digital magazine. He participates in editorial meetings with OPB’s news staff to plan editorial coverage and oversees every aspect of the magazine’s design and curation.

The promise of interactivity creates a different impression of content that has been transplanted to a tablet, according to Bernert. “Even though it’s the exact same story and the exact same content, just the way you experience that content by actually holding it in your hands, it changes a lot of things,” he said.