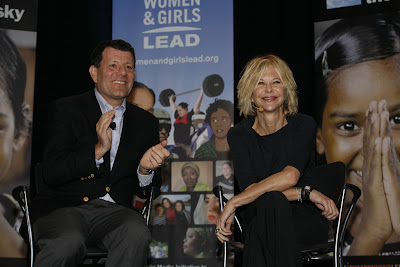 DENVER, Colo. — At the PBS Annual Meeting, New York Times columnist Nicholas Kristof interviewed actress Meg Ryan during a luncheon presentation on Half the Sky. The Independent Lens two-part documentary, coming in October, is based on the book Half the Sky: Turning Oppression into Opportunity for Women Worldwide, by Kristof and his wife, Sheryl WuDunn. Ryan was one of several celebrity activists who traveled overseas with filmmakers and interacted with women bravely facing — and overcoming — horrendous conditions due to forced prostitution, gender-based violence and maternal mortality. The documentary is part of ITVS’s Women and Girls Lead initiative. (Photo: Martin Allred/PBS)