James A. Fellows, 77, an advocate of high ideals, strategic planning and executive training for public television, died in his sleep Friday, Jan. 6, at a nursing home in Millville, N.J. 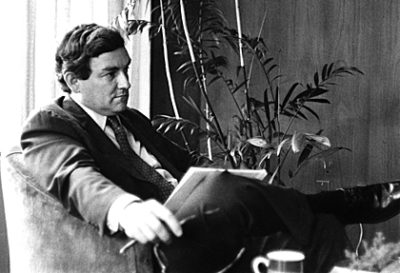 Fellows conducts an interview for an NAEB publication.

He had been besieged by Parkinson’s disease and the lasting effects of a nearly fatal car accident in 2003 and a stroke in 2004.

Jim represented stations on the national scene for 40 years, serving as the last president of the National Association of Educational Broadcasters, a forerunner and parent of PBS and NPR.

Recognizing that few station leaders had ever been trained as managers and budgeters, he arranged for development of intensive short courses taught at business schools.

He founded Current as one of NAEB’s last projects in 1980 and remained its publisher, in effect, for more than 20 years — advising its editors, never interfering, inspiring them with his sense of purpose.

An admirer of the BBC’s planning unit, he worked persistently but unsuccessfully to find funding to establish a staffed planning unit for the famously fractured and decentralized public TV field.

In 1979, CPB honored him with its highest award for achievement in public television, the Ralph Lowell Medal.

“He saw the brightest possible prospects for what we were engaged in,” says Rick Breitenfeld, retired head of Maryland Public Television and Philadelphia’s WHYY. “Jim was rare, thinking beyond the next budget year.”

“I really don’t remember him involved in any way in political battles,” says Breitenfeld, who may still have scars from his own skirmishes with three-letter national organizations.

Jim was more of a diplomat, a hospitable friend, a calm voice.

Don Quayle, NPR’s first president and an NAEB chair, says, “The thing about him is, he was universally loved by those who knew him. He was able to induce so much good spirit and futurism.”

Jim was born in 1934 and raised near Albany, N.Y. He had radio on his mind when he entered Syracuse University at age 16, but after earning bachelor’s and master’s degrees, he taught television. TV was booming commercially and was sprouting its first educational stations.

He joined NAEB in 1961, a year before Congress began investing in building and equipping the early ETV stations, and rose to succeed William G. Harley as president in 1975. Harley and Jim were behind-the-scenes facilitators “who were making things happen without stepping into the spotlight themselves,” says Robert K. Avery, who has written histories of the period and now teaches at the University of Utah.

“At NAEB, Jim was the glue, at that point in time, when we were trying to get a systematic movement in place,” says Avery, who was working at WQED in Pittsburgh. Jim pulled together what Avery calls an intellectual collective that included Hartford Gunn and Michael Hobbs of WGBH, George Hall, Breitenfeld, Quayle and John Witherspoon.

They joined Jim in popularizing notions such as the mutliplatform telecommunications center, or “teleplex” as he called it, that broadcast stations could become.

CPB, PBS and NPR literally came out of NAEB just before and after 1970. The association’s leaders, including C. Scott Fletcher and Gunn, worked with Lyndon Johnson’s White House and the Carnegie Commission to bring federal funds to the field by creating CPB. NAEB’s station memberships and program distribution functions were spun off shortly when PBS and NPR were founded.

To answer the need that Jim saw for managerial training at stations, he and NAEB colleagues arranged short courses taught at Harvard Business School and other universities, which participants recall today as valuable practical experiences. Mary Bitterman, former head of San Francisco’s KQED, is still grateful for Jim’s welcome in 1974 when she was the youngest station g.m. and only the second woman g.m. in pubTV. She and others who went far in the field were among the short-course students at Harvard.

“Jim always looked for opportunities to let young people advance in public broadcasting, and to bring fresh ideas, and to feel they are included,” says Bitterman.

Jim and colleagues repurposed NAEB to serve individual members while maintaining its annual meeting, bimonthly journal and other services, but it survived little more than a decade, dissolving in bankruptcy in 1981.

He persuaded a handful of stations to put up seed money to restart Current, and responsibility soon settled on WNET, which maintained Current for almost 30 years, until we became part of American University.

In 1983, Jim took an apartment in Chicagoland for 20 years to head Central Educational Network, a regional station association, which he reorganized as American Telecommunications Group.

He had loved and regularly attended the Prix Jeunesse biennial children’s TV festival in Munich, and founded a U.S. counterpart — still operating in Chicago and called the American Center for Children and Media.

It was one of several arms of CEN/ATG, along with the Hartford Gunn Institute, a barely funded kernel of the strategic planning unit that Jim wanted public TV to have. It was named after Gunn, a friend and planning enthusiast who had been PBS’s first president.

Despite Jim’s optimism and energy, the sum of ATG’s parts could not cover their costs and it went out of business. Of the four “regional networks” in public TV, none remained regional. The western network ceased operating and began a small source of venture capital for the field; the southern and eastern networks went national as NETA and American Public Television, respectively.

In 2003 Jim returned to his part-time home in Bethesda, Md., where he already served as chair of the Maryland Public Television Foundation.

His active life was curtailed in December 2003, when he was hit by a car in front of his Maryland home and seriously injured, though the accident left his mind intact.

Characteristically, Jim did not despair or ask “why me?” or “what’s to become of me?” his friend and caregiver Pete Willson recalled in a note about Jim. “Instead, time and again, he quietly, reverently, and even serenely repeated the famous passage from the Bible, ‘I have learned, in whatsoever state I am, therewith to be content.’”

Many friends came to see Jim in his home that winter and spring, Pete wrote. “More than once after such a visit, a friend or family member would say, ‘I don’t get it. I came here with the intent of bucking Jim up…. Instead, he’s the one who bucked me up.  He’s the one who gave me cheer.”

Jim suffered a stroke in July 2004 and battled Parkinson’s for the rest of his life.

[Update: A funeral was held March 12 in Rensselaer, N.Y., and a memorial reunion of his friends May 12 in D.C. Details in the sidebar.]

Being Jim Fellows: From Cufflinks to Coincidences

Jim Fellows’ family plans two memorial events this spring — a funeral and burial service in Rensselaer, N.Y., at his boyhood family church, and a memorial reunion of his friends in Washington, D.C.:

Arrangements are by the Lyons Funeral Home in Rensselaer, N.Y., 518-283-2282. In lieu of flowers, the family suggests donations in Jim’s memory to the American Center for Children and Media, 5400 N. St. Louis Ave., Chicago, IL 60625 or to donors’ local public radio or TV stations.

A Fellows commentary from 1996: Public TV has the makings of a growth strategy but may not know it.

Fellows’ 1997 summary of changes he foresaw as public broadcasting enters its second generation.

The Hartford Gunn Institute founded by Fellows and named for PBS’s first president, published a number of papers including this one suggesting new federal initiatives inspired by the land-grant college legislation of the 1860s.