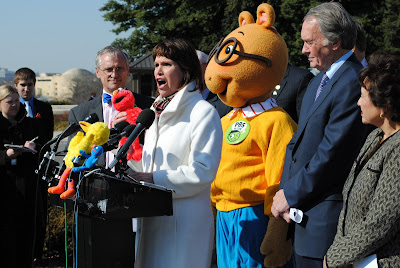 Seven Democratic House members were joined by the PBS Kids character Arthur in a press conference in the breezy sunshine outside the Capitol in Washington today (Feb. 16). Rep. Earl Blumenauer (Ore.) said this latest threat to public broadcasting funding is different from former battles in the mid-’90s and six years ago (Current, June 27, 2005). “Back then, there was a strong, moderate, thoughtful Republican base of support,” he said. “Now there is a partisan undercurrent that is unsettling.” Rep. Ed Markey (Mass.) said because of the importance of local pubstations to their constituents, “there is a razor-sharp edge to this issue back home.” Rep. Betty McCollum brought along her stuffed Elmo (above, Current image), and Big Bird did indeed make an appearance, as he has in past funding battles – but this time, in miniature form on the podium, accompanied by an even-smaller Grover. Rounding out legislative attendees were Rep. Nita Lowey (N.Y.), a staunch supporter during previous battles; Rep. Sam Farr (Calif.); Rep. Paul Tonko (N.Y.); and Rep. Bill Owens (N.Y.). Arthur stood at attention quietly observing the proceedings, and was thanked for his service to America at the end of the proceedings. Watch the press conference here.