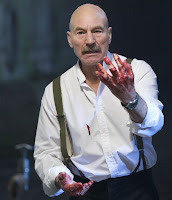 Actor Patrick Stewart had no idea the Screen Actors Guild nominations were to be unveiled Thursday (Dec. 16) so he was especially stunned when his name was among them, for his title-role work in the Great Performances presentation of “Macbeth.” “That is always the nicest way to receive good news,” he told the Hollywood Reporter. “When you’re not expecting it and it comes, it’s especially pleasing.” His was PBS’s sole nomination. (Image: PBS)