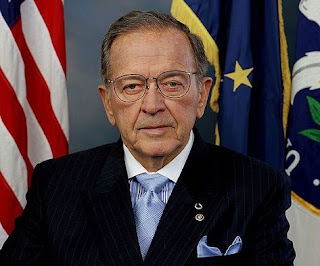 Stevens served in Congress from Dec. 24, 1968, to Jan. 3, 2009. He was chair of the powerful Senate Appropriations Committee from 1997 to 2005. He also chaired the Commerce, Science and Transportation Committee in 2005 and ’06. The Washington Post’s obituary called him “one of the most powerful congressmen of his generation.”

Stevens received the 2002 Ralph Lowell Award from CPB, recognizing outstanding individual contributions to public television. Stevens was an early supporter of advanced federal funding, the most fundamental concept in public broadcasting’s financial structure, which provides stability and encourages efficiency, said a statement from CPB in February 2003 when the award was presented. CPB President Robert Coonrod said, “Every Alaskan knows what Sen. Stevens does for public broadcasting in their state. We want the rest of America to know what he does for all of public broadcasting on behalf of our nation.”

Stevens had survived another plane crash. On Dec. 4, 1978, five of seven people, including his first wife, Ann, died in the crash landing at Anchorage International Airport. Before that tragedy, Stevens reportedly said he’d had a premonition that he would die in a plane crash.

Stevens was indicted in July 2008 on federal corruption charges tied to his relationship with an Alaska oil exec; he lost a seventh bid for his Congressional seat that year. The case was later thrown out due to prosecutorial misconduct.