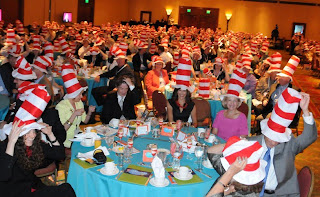 Coming to you from Austin, a whole bunch of PBSers and station folks disguised as Cats in their Hats at breakfast today. Ironically, Martin Short (just left of center), the voice of the lead character in this fall’s “Cat in the Hat Knows a Lot About That” on PBS, appears to be the only one in the entire hall without one. Kate Klimo, longtime editor of Theodor Seuss Geisel, told the crowd in the later PBS Kids session that Audrey Geisel “maintains close personal contact with her husband in the hereafter,” and told Klimo that it was “PBS or nothing” for a Cat in the Hat animated series. “Because, you see, Dr. Seuss had very high standards,” Klimo said. “For him PBS represented everything good about children’s TV.” (Image: PBS)