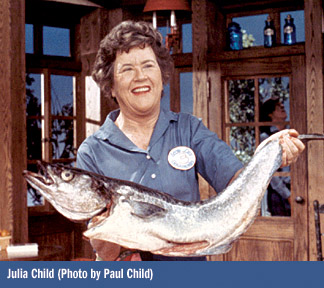 In the days before her 92nd birthday, Julia Child had been suffering kidney failure, according to her niece, Philadelphia Cousins. On Thursday, Aug. 12, “in her characteristically decisive way, she removed her oxygen mask, declined to go to the hospital and closed her eyes.” The public TV host who introduced America to fine cooking died in her sleep the next morning in her home in Montecito, Calif.

“Julia Child let the hot air out of not only high cuisine but also public broadcasting,” said Scott Simon the next day on NPR. She was public TV’s first real star, Simon noted. Unlike the handlers of the Sesame Street muppets, he added, Child refused endorsement deals, insisting viewers “shouldn’t think her beliefs were for sale.”

When a winery was underwriting her show, Child once delighted in recommending that viewers drink beer with the dish of the day, remembers Geoffrey Drummond, her producer in recent years. And she pulled out a Samuel Adams she had hidden on the set. She turned down rich offers for product endorsements, he adds.

Viewers loved Child for her no-nonsense authenticity and could trust that following her instructions would be worth the trouble. For nearly 40 years on public TV, she played against type, talking with the accent of the upper class she came from but brandishing cleavers, blow torches, and rolling pins for comic effect, licking her fingers, playing with carcasses before deboning them, forgetting food on a burner and then recovering with aplomb, live on tape.

“It was her intensity that made me love her long before I liked to cook,” Joel Stein wrote in Time. He was young to be watching The French Chef, “yet, even to my teenage brain, she was clearly a badass.”

Fans who relish her style remember in particular that she dropped a chicken or a large slab of fish on the floor. Child denies it in an interview in Marilyn Mellowes’ “Julia! America’s Favorite Chef,” an American Masters bio that aired last week on PBS, though she admits that parts of a potato pancake got out of control. The program captures her subsequent, immortal ad-lib, “You can always pick it up. . . . You’re alone in the kitchen, who is going to see?”

Child’s long career took off remarkably late in life, with the publication of Mastering the Art of French Cooking in 1961, when she was 49, and the premiere of The French Chef on Boston’s WGBH in 1963.

Julia McWilliams, a well-off, lively, 6-foot-2 girl from Pasadena, Calif., had drifted after graduating from Smith College with a degree in history until volunteering for service in World War II with the U.S. spy agency, the Office of Strategic Services. She served in Ceylon and China, where she met Paul Child, an OSS mapmaker, who would become her husband.

Some fans like to think she was an OSS spy, but Julia Child insisted she was only a clerk-typist, says Drummond, who can’t imagine her being covert. But Drummond suspects her husband may have been a spy during and after the war, as he moved from the OSS to the foreign service. After retirement, Paul Child began a second career as Julia’s support manager, set designer and photographer. He died in 1994.

When Paul was stationed in Paris after the war, Julia found her calling with her first bite of French cooking. She struggled through the Cordon Bleu cooking school.

“For the rest of her life as a professional cook, she was a teacher, because that was the thing that had been most important for her, that turned the corner for her — to be taught,” said food historian Laura Shapiro in the American Masters bio.

She loved the science, the creativity, the history and the manual technique of cooking, she told Dennis Wholey, the talk show host and author of Are You Happy?

“To be happy, it’s terribly important to find the kind of work you really love to do, so that it’s really a hobby,” she told Wholey.

Her first cookbook, written with Simone Beck and Louisette Bertholle, was 10 years in the making; 11 others followed. She did hundreds of cooking shows with WGBH producer-director Russ Morash until 1983. She returned to public TV a decade later, while in her 80s, to do Julia Child — Cooking with Master Chefs and a procession of other series produced by Drummond.

Two of Child’s latter titles, the 1998 series with Jacques Pepin, Julia and Jacques Cooking at Home, and her last special, Julia Child’s Kitchen Wisdom, from 1999, are still in syndication through American Public Television.

Her own values about food were those many food-lovers could adopt. In a farewell editorial, the Boston Globe said: “Child’s goal never seemed to be perfection, only pleasure. She stood fearlessly before calories and rich food armed with her wise strategy of moderation: eating a little bit of everything to avoid missing anything.”

She became known to a new generation when Dan Ackroyd caricatured her on Saturday Night Live in 1978.

“To some extent, the Dan Ackroyd piece, which she loved, kind of established her as a national figure,” says Drummond. She admitted to being a ham and knew comic timing. “There are so many moments in the shows where you just see her take a beat and then come out with a comment that floors everybody.”

At one such moment, the producer recalls, Child was mashing sticks of butter into potatoes. “She says, ‘If you’re afraid of butter,’ and she takes a beat … ‘just use cream.'”

Though Child was loved for her style, she labored over details in her cookbooks and gained gourmets’ respect for her rigorous research and recipe testing. Food writer Susan Selasky pointed out in the Detroit Free Press that even the no-frills Consumer Reports saw great merit in Child’s work. In 2001, when the consumer magazine and the Institute of Culinary Education tested recipes from eight recent cookbooks from various authors, they found the companion book for Julia and Jacques Cooking at Home was one of two that passed muster; with all of the recipes working in the kitchen.

Child stopped doing TV after 1999 — it was an undiscussed joint decision with her producers, Drummond says — and moved to Santa Barbara in 2001, packing up her kitchen from the Childs’ house in Cambridge, Mass., and donating it to the Smithsonian Institution.

She was working until a few days before her death on a memoir of her Paris years with Paul Child.

She is survived by her sister, Dorothy Cousins, of Mill Valley, Calif., and nieces and nephews. She decreed that there would be no funeral. Instead of sending flowers, her family suggests that friends consider donations to the Culinary Trust Endangered Treasures Program in Louisville, Ky.; COPIA Julia Child Culinary Program Fund in Napa, Calif.; or the American Institute of Wine and Food in San Francisco.