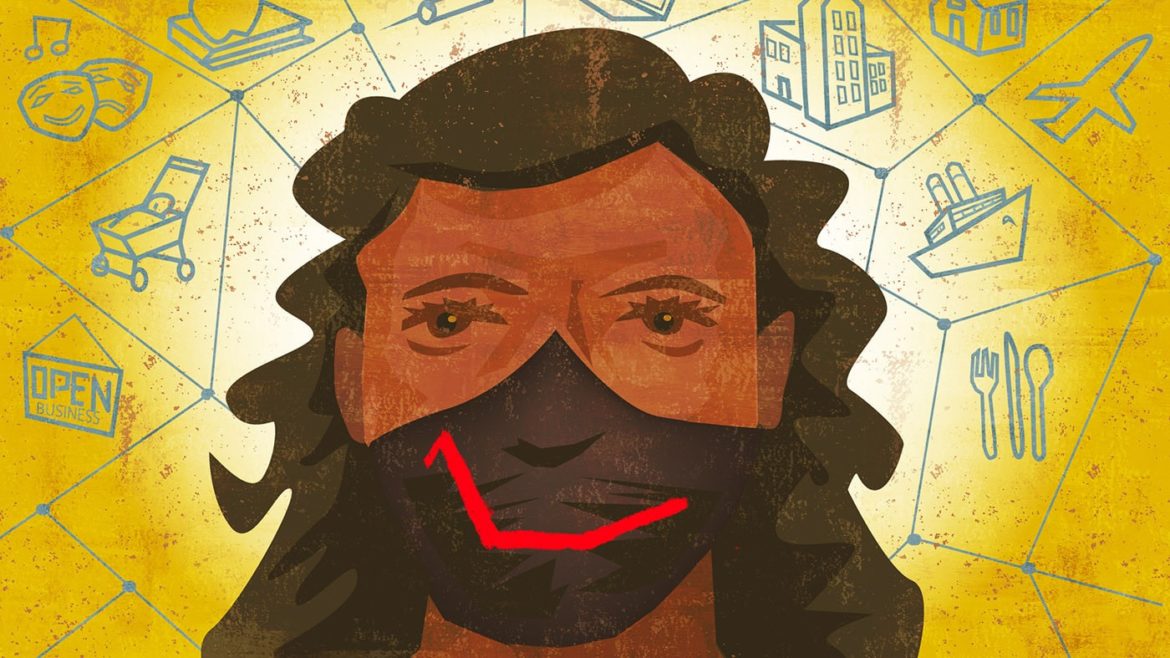 This is the first article in our series “The Way We Work Now,” a look at how a year of living through the COVID-19 pandemic has affected stations and pubmedia employees.

Salvador Carrera signed on as development director at Vegas PBS about a month before the city’s businesses began closing their doors and cutting their marketing budgets in response to the COVID-19 pandemic.

“Vegas is pretty unique in that it’s got all its eggs in one basket,” he said, noting that the regional economy depends on businesses that support tourism — arts and entertainment, dining, hospitality and gambling. By the end of March 2020, two weeks after lockdowns began, dozens of underwriting clients pulled back from the station, Carrera said.

Vegas PBS’ experience with sponsorship early in the pandemic was similar to that of many public broadcasters that had counted restaurants and local arts and cultural institutions among their top underwriting clients. Cancellation of live performances, travel plans and dinner reservations for the foreseeable future triggered a nosedive in sponsorship sales for public media on the local and national levels. Sponsorship sales to educational institutions also dropped sharply, according to marketing execs and sales representatives.

A year later, public media’s sponsorship sales leaders report that they’ve found ways to begin to make up for the losses. Some sales reps have cultivated relationships with new clients, from new categories of businesses to government agencies. They’ve also repackaged their sponsorship offers and focused on developing new products or services. Some are seeing signs that long-standing clients are preparing to resume marketing soon.

“Things were pretty dire in March, April and May, but we steadily had a rebound,” said Gina Garrubbo, CEO for National Public Media, which handles corporate sponsorship sales for NPR and stations.

A definitive analysis of the pandemic’s effects on corporate underwriting at local stations won’t be available until fall, when CPB typically publishes its annual report on public broadcasting revenues. Sponsorship sales executives and analysts estimate a 5-10% drop in underwriting revenues in 2020, noting that results vary widely among stations.

A study published in December by public radio’s Station Resource Group reported that underwriting is in “serious trouble.” Based on stations’ preliminary budget data, the study estimated a 7.9% median decline in underwriting sales in FY20 and a further decline of 7.6% this fiscal year for the median station.

“Bigger stations are taking heavier hits because they had more to lose,” said Tom Thomas, co-CEO of SRG, in an interview. Stations that earned more than $15 million in annual revenues reported that they anticipated a 17% downturn in underwriting this year.

SRG’s December study also found that sponsorship for national programs has been more resilient than local underwriting. National programmers tend to have more access to major corporations and foundations, and their national reach makes a difference, Thomas said.

Overall business income, which includes corporate underwriting, accounted for nearly 13.5% of public broadcasting’s revenue in fiscal year 2019, according to CPB’s most recent annual revenue report. The nearly $458 million total business income of local public media stations in FY19 was a 2.1% increase over the previous year.

Suzanne Zellner, VP of corporate sponsorship for GBH in Boston, agreed that local underwriting took a harder hit than national sales in 2020. She declined to discuss how much local underwriting decreased, but she expressed optimism that revenues will rebound in 2021 and 2022.

Like other stations, GBH was affected by local sponsorship cancellations from arts, cultural and higher education institutions. Clients from the tourism industry and child-care organizations also scaled back, but she sees signs that they may resume marketing soon.

Clients from travel companies have told her that they expect to buy more spots in the near future to position themselves for “pent-up demand” for tourism once travel restrictions are lifted.

Public media sponsorships have a competitive advantage over ad-supported media organizations because they can offer underwriters “category exclusivity” for their campaign. For example, a national sponsor can pay to be the only one in its industry to underwrite a program. Category exclusivity is especially effective with sponsors from financial, cruise travel, pharmaceutical and other industries, and has helped Zellner hold on to GBH’s biggest clients.

GBH also created an underwriting package for new podcasts from Nova and Antiques Roadshow, as well as its podcast All Rev’d Up, which is co-hosted by Black pastors.

At NPM, the sales team that handles NPR’s corporate sponsorship saw underwriting decrease 11% during the pandemic, according to Garrubbo. For the team that places national spots on local stations, sales declined 10%. Underwriting spots for online grocery shopping and delivery were one of the bright spots for stations, she said.

NPR has also leveraged its standing as a top podcast producer with underwriters, Garrubbo said.

“NPR has six of the top 20 podcasts. So on the podcast side, we are doing very well,” she said. “On the radio side, I believe the only reason we’re off is because of the Morning Edition and All Things Considered ratings being off on adults from 25 to 54,” a listenership decline that’s linked to the sharp drop in commuting after workplaces shifted to telework arrangements.

As stations were hit with sponsorship cancellations last March, during the first month of lockdown, sales leaders advised station reps to pitch sponsorships to local museums, arts organizations and educational institutions looking to spread the word about virtual events and online classes.

But that strategy didn’t work well, according to sales reps who tried it, because these organizations were reeling from revenue losses. Efforts to reach out to new prospects in different industries turned into sales.

Carrera of Vegas PBS said the station acquired new accounts from senior health-care companies. Another new client is an automotive company that paid for a Black History Month underwriting spot. The station also ran spots for statewide immunization efforts, which were paid for by state agencies.

“Immunize Nevada is a yearly effort that comes to all stations in the form of a PSA,” he said, describing the nonprofit that organizes the campaign. Since it was critical that broadcasters commit airtime for those messages, Immunize Nevada recently invested in a paid campaign across all stations.

Hawaii Public Radio boosted its underwriting sales to real estate companies and government organizations, and an airline that put its sponsorship on hold has since returned, according to Cat Gelman, VP of corporate relations. With those inroads, the station is projecting a 5-10% decline in underwriting this fiscal year, Gelman said.

WHQR in Wilmington, N.C., added new accounts with small businesses and sole proprietors offering goods and services. The new clients include home improvement companies, psychotherapists, landscapers and craft brewers, according to Jeff Hunter, who handles both underwriting sales and major gifts for the station. The station also won a small contract to produce virtual museum presentations.

Hunter co-organizes a group of sales representatives who work for public media stations in North Carolina. The group has its own Slack channel and holds virtual meetings to share ideas.

Will Keible, director of marketing and corporate support at WDAV in Davidson, N.C., said similar efforts by Greater Public and the Public Radio Program Directors Association to support stations’ corporate sales teams have been helpful.

Sales directors for stations in other regions described their efforts to build sponsorships for digital products.

WFYI in Indianapolis had completed two consecutive years of best-ever underwriting sales before the pandemic arrived, said Stacey Stuteville, director of corporate and foundation relations. A third of the sponsorship revenues in 2018 and 2019 were from spots marketing live events, arts organizations and entertainment. When fiscal 2020 ended, actual sponsorship sales were $600,000 short of budget.

The budget for FY21 forecasts a slow recovery. WFYI projects that it will bring in $500,000 less than pre-pandemic sales.

WFYI is looking to sell more underwriting for its digital products, such as spots inserted into its podcasts and its online radio stream, Stuteville said. Back in 2014, WFYI didn’t project any revenues for digital sponsorship. This year her goal is to reach $160,000.

The station’s newsroom is introducing reporting initiatives on specialized beats, including education, health and diversity, equity and inclusion. Stuteville’s plan is to pitch sponsors on the beat coverage as a way to target their messaging to specific audiences.

In addition to SDPB’s sponsors in the arts, culture and tourism categories, the state network’s major underwriters included utility companies and businesses tied to agriculture, finance and legal services. At the end of fiscal year 2020, underwriting revenues had dropped nearly 20% over the previous year. Most of the cancellations were arts organizations, including museums, and tourism groups.

One of SDPB’s competitive advantages is that its television and radio networks reach the most rural regions of the state. For companies that want to spread their messages everywhere, SDPB helps them do that.

Some of the network’s top clients have told Erickson that they plan to resume sponsorships, and efforts to attract new clients are progressing, he said. The state’s department of tourism booked underwriting spots encouraging safe travel and attracting tourists back to the state. A higher educational institution that wanted to reach Native American communities signed on to sponsor Indian Country Today, which the television network airs on Sundays.

“They know that we’re the only statewide offer for news programs related to Native Americans,” he said.

Erickson, who joined the station in October, said his greatest challenge is figuring out how to boost SDPB’s digital underwriting sales. A client interested in radio and television sponsorship was disappointed to learn that SDPB cannot digitally insert advertisements into its podcasts. “As a new guy in this industry I’m eagerly seeking a mentor who can show me the way,” he said.

Recent campaigns addressed the 2020 Census and public health precautions related to COVID-19 and the state’s opioid addiction crisis. MPT also reached a deal with the Maryland Department of Aging, an organization that Schupak described as “a natural fit for our audience.”

When an agency wants to run its campaign on MPT, the state network can earn additional revenue from the sponsorship, but sometimes the spots run as public service announcements, Schupak said. After Governor Larry Hogan recorded a message encouraging Marylanders to wear masks, for example, that spot ran for free as a “goodwill” gesture, Schupak said.

In a similar case of stewardship, West Virginia Public Broadcasting offered a run of free radio underwriting to independent and locally owned restaurants and small businesses affected by the pandemic. The station eventually assisted 40 businesses.

WVPB wanted to support struggling businesses and be a good community partner, said Jane Wright, director of grants and underwriting. The initiative was well-received, and five businesses that benefited from the program came back later to pay for a run of underwriting spots.

“We didn’t do it for the retention, although it has evolved into a great partnership with small businesses in our state that may otherwise not have tried underwriting with WVPB,” she said. “Our mission is to serve West Virginians, so it was a no-brainer.”

Correction: A previous version of this story incorrectly said that South Dakota Public Broadcasting does not produce original podcasts. The state network has original podcasts but is not able to insert ads into them.