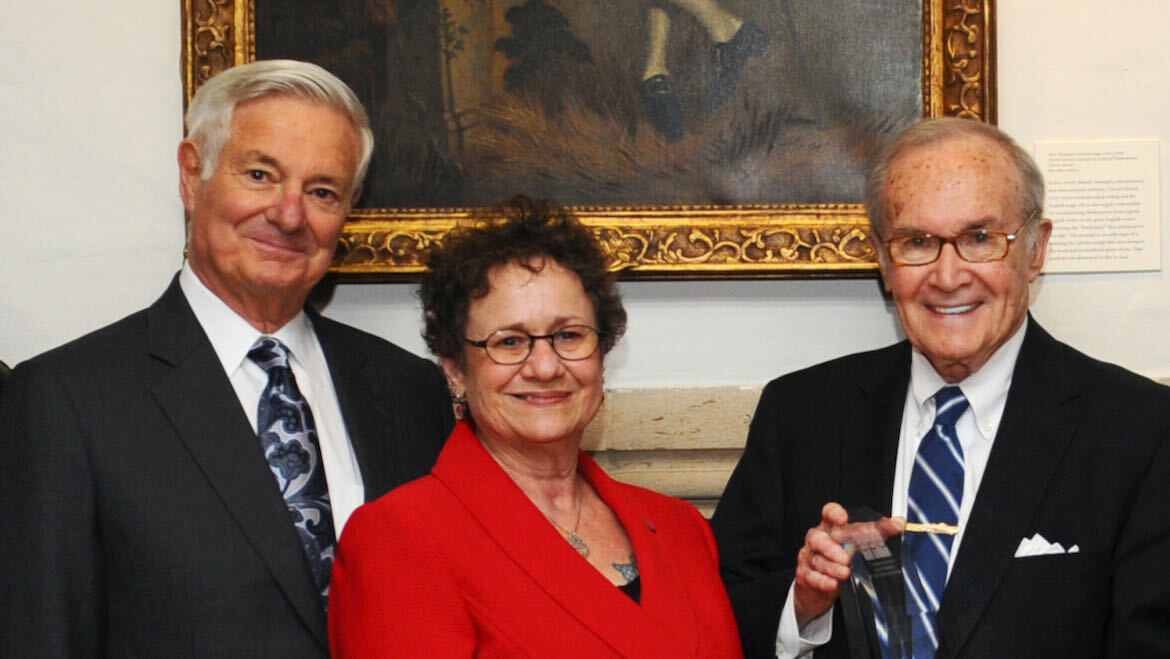 Patricia Cahill, center, during her tenure as CPB Board chair, posed with CPB Director Bruce Ramer, left, and former FCC Chair Newton Minow. CPB honored Minow in 2012 for his role in shaping public policy that spurred development of public broadcasting.

In 1966, when I was a student at the University of Kansas, a professor who taught radio production told me that I should change my major to nursing or teaching. He said that women couldn’t — more likely meaning that they shouldn’t — get jobs in broadcasting.

I didn’t listen to him. I found my first job at the university’s radio station, KANU in Lawrence. I started as traffic director and then became director of the station’s radio reading service. Then I moved on to KCUR at the University of Missouri in Kansas City to take a job as a reporter and producer.

Back then, NPR programs came across telephone lines and I heard the voice of All Things Considered host Susan Stamberg, who apparently had also ignored the advice of broadcasting professors. Susan and other women who delivered and reported news for NPR — Linda Wertheimer, Nina Totenberg and Cokie Roberts — were inspirational and affirming for those us who were starting our radio careers. All of us were determined to change the world.

At the time there was only one phone line linking the stations to NPR. Programming changes and notes were announced on the line prior to broadcasts of All Things Considered. Some GMs would call NPR to ask for a repeat of the offensive language advisory — just to make sure they had understood it correctly. Like, “At 15 minutes and 3 seconds into All Things Considered, the word ‘tongue’ will be used as a verb.”

My career took me from KCUR to KMUW at Wichita State, where I worked as news director. The program director left after I had been there six months, so I ended up doing that job. When the general manager left, I got that job — even though several people warned me that Wichita State wasn’t ready for a female general manager.

Eventually, I noticed that I was paid less than the former GM, and the savings from my lower salary were paid to the new male program director. I was 28 years old and so elated to be promoted that I didn’t question the pay disparities.

A couple of years after national programs began arriving by satellite, station managers began arguing about whether to prioritize audience ratings over noncommercial educational services. We finally figured out that we could do both.

Those debates made quite an impact on me when I moved back to Kansas City to become GM of KCUR. When I arrived, the program schedule included volunteers producing hourlong weekly shows on Bollywood music and French-language broadcasts. I took those programs and a dozen others off the air. The women who produced the French program complained in writing to the chancellor, and fans of the folk music program picketed the station. Afterwards, the folkies left their signs at the station. I kept them in my office for years.

Changes aren’t easy. I’ve been burnt in effigy, asked to resign and chastised in the Kansas City Star. The heat I withstood for decisions were a personalized microcosm of what happens to public broadcasting nationally, especially when politicians try to cut or zero out funding for CPB. That kind of pressure — wielded in Congress and state legislatures — is the reason why CPB’s annual appropriation is forward-funded by two years.

Forty-two years after my professor told me that women shouldn’t work in broadcasting, I was confirmed by the United States Senate to serve on the board of directors of the Corporation for Public Broadcasting. I was the first CPB director to be designated as a representative of public radio stations.

Although the Public Broadcasting statute says the CPB Board should include a representative of public radio, senators who nominate citizens to the board tend to choose political friends or high rollers from their political parties. Few of them know of this provision in the statute.

I was nominated by then–Missouri Sen. Claire McCaskill. Since she was a Democrat, during the nominating process I was asked if I was a Democrat. I said I was.

I had never really thought of myself as a political being, particularly when I managed a news station. I was concerned about declaring a political affiliation but quickly discovered that everyone who serves on the CPB Board is outed as a Republican or Democrat. In fact, the statute calls for the majority of the Board seats to be controlled by the same party as the President. Fortunately, the votes on the Board don’t fall along political lines.

When I joined the board in 2008, I was concerned that I was going to be walking into a conservative quagmire. Pat Harrison, who became CPB president in 2005, had co-chaired the Republican National Committee and was selected to lead CPB by Ken Tomlinson, the board chair who campaigned to bring more conservative programming to public TV. For the first meeting, I wore long sleeves and high-cut shoes to cover my tattoos.

But when I heard from Pat and began working with her senior staff, I immediately became comfortable. They weren’t the enemy I had imagined; they were the answer. They had thought through the big challenges facing public broadcasting and knew what to do about them. At my next meeting, I wore short sleeves and took off my shoes.

Not that it was all smooth sailing in the board room. We disagreed on issues that weren’t all that different from what I’d seen as a GM. Sometimes members of local station advisory boards want to make program decisions. In Wichita, my PD once got into a minor fistfight with the chair of our advisory board about classical music programming. At CPB, I wasn’t surprised when Howard Husock, a Republican board member, wanted all the public stations to focus exclusively on local news. He believed that CPB could make programming decisions, which is wrong.

CPB doesn’t make programming decisions. It funds some programs, but decisions about whether and when they air are up to local stations. And the CPB Board doesn’t ever make programming decisions. Husock also wanted the board to form a journalism committee, but no one agreed that this was worth doing. We weren’t appointed to the board to discuss journalism decisions or to program stations. We were there to act as a firewall against political interference in editorial decisions, and as stewards of federal funding.

Many things have changed in journalism, but the need for a free and independent press remains. Because of the difficult economic landscape and disruptive technologies affecting news media, among other challenges, it turns out that federal funding of public broadcasting through CPB works as an effective firewall between political influence and content.

It’s a hard concept for people to get at first. The spending of federal dollars on public broadcasting, with funds managed by CPB as an independent and separate institution, reinforces and supports locally owned and operated stations’ control of their broadcasting choices. CPB also funds good ideas.

The tiny investment by the federal government turns out to be really important at the local station level, and that’s particularly the case for smaller rural and minority stations. And the other, really key aspect of federal funding for public broadcasting is that it also provides a firewall between public media stations and advertising — I mean “underwriting.” Take away the federal funds and many stations will find it even more difficult to serve their communities with meaningful content and engagement. Asking them to substitute advertising for federal dollars would lead to the end of locally owned and operated public media as we know it.

There are a number of issues with the Public Broadcasting Act of 1967 that could be or should be changed. Having served on the CPB board’s compensation committee, one issue stands out to me. The statute limits the salary of CPB’s president and chief executive to no more than that earned by members of the president’s cabinet. The restriction also influences the compensation of CPB’s senior leaders. NPR, PBS and the stations aren’t affected by the statute’s salary limits. Having reviewed salary comparisons for CPB and other organizations, the differences seem unfair.

To me, the risks of trying to revise the law outweigh the potential benefits. Members of Congress, lobbyists and some listeners and viewers would try hacking at the statute to serve their own political or personal agendas. Just like the problems I dealt with from local advisory board members, everyone thinks they know how to make decisions about programming or finances. And then there are people who want to end federal funding for CPB — even though it’s been proven that defunding CPB would end public broadcasting as we know it. Updating the law would open up other important provisions, including the qualifications for the Community Service Grant program, the 75/25 split of the appropriation between television and radio, and funding to other nonprofit groups and for programming. The list goes on.

We’ve worked with the law for over 50 years and, overall, we’ve made it work. This is not the time for public broadcasting to be in the spotlight. I wonder if there ever is a time.

Things can and will change, which brings me back to something that happened during a Kansas Association of Broadcasters conference about 10 years into my public radio career. By then, I was GM of KMUW at Wichita State. The radio professor who had told me to change my major was at the conference. I had fantasized about meeting him again. When we spoke, I reminded him that he told me that women couldn’t work in broadcasting. Yet here I was.

In my imagination, I expected he would get down on his knees and beg my forgiveness. Instead, he replied, “Things change.”

That’s why the conversation underway in the public radio system about aligning for the digital future is so important. It’s up to us to confront this rapidly changing environment with its new competitors, disruptive forces and the imperative to improve diversity, equity and inclusion across the system. We must respond quickly to ensure our public service is even more essential and valued than ever. The ways that we handle change and respond to the unknown will define us.

In my years on the CPB and NPR boards and career running stations, I came to recognize that we all love this business of public broadcasting for our own reasons. The common thread we share is that working in public broadcasting allows us to participate in shaping American democracy, culture and identity. At the community level, at the national level — communicating, opining, entertaining — uninhibited by commercialism, or by political action committees, we are free to serve the public and, together with them, respond to the changes that shape us.

Patricia Deal Cahill retired as GM of KCUR in Kansas City, Mo., in 2012. She was elected chair of the CPB board that fall and became the first radio broadcaster to lead the board. During her career as a GM, Cahill served on the NPR Board from 1982–88.