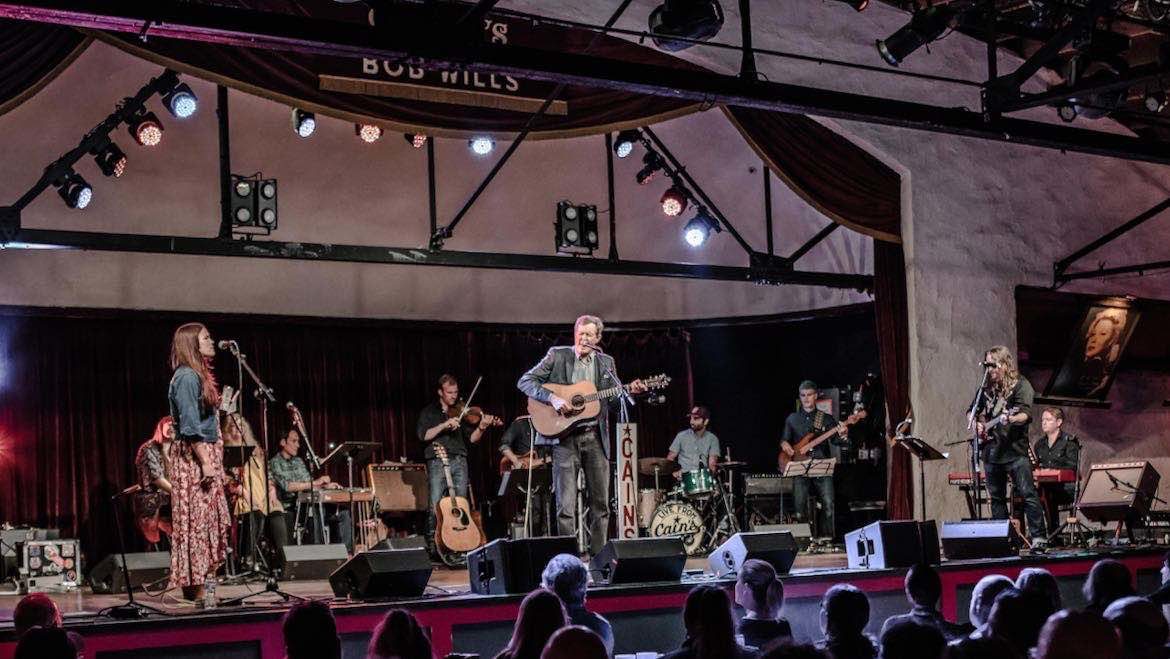 "Live From Cain's" host Robbie Fulks performs with musical guest Bonnie Bishop, left, and the show's house band, The Oklahoma Specials, in a May 29 show that became the program's pilot episode.

CPB is taking a chance on a fledgling music and arts show centered on an iconic performance venue in Tulsa, Okla.

The idea is to take Live From Cain’s, a homegrown hourlong program hosted by noted alt-country singer Robbie Fulks and featuring a house band showcasing Tulsa-based musicians, to a wide national audience.

Only one episode has been recorded, and just three Oklahoma public radio stations have aired it. Kathy Merritt, CPB’s senior VP for radio and journalism, said her organization is giving the show a boost to aid public media’s role as “a vital platform for arts, culture and information that documents and shares the American experience in all its richness and diversity.”

“Through this CPB seed funding, the producers of Live From Cain’s can pursue the research and pilot development essential for the buildout of programs created with national audiences in mind,” Merritt said.

CPB’s grant of $200,000 — roughly half of the show’s expected budget for 2020 — will go toward producing seven more episodes of the show next year. Live From Cain’s co-EP Julie Watson said she will seek the rest of the show’s budget through private and corporate support, foundations and in-kind donations.

The idea for the show starts with Cain’s Ballroom, which public TV viewers may recognize from its appearance in Ken Burns’ Country Music. The historic venue opened in 1924 and is known unofficially as the “Carnegie Hall of Western Swing.” Throughout the 1930s and ’40s, Bob Wills and the Texas Playboys recorded daily radio shows from Cain’s that were broadcast around the country, catapulting both the venue and the genre of Western swing to fame.

Cain’s later hosted notable performances by acts like Tom Petty, U2 and the Sex Pistols, whose bassist Sid Vicious famously punched a hole in the wall during their performance. Aside from its history, Cain’s Ballroom is also unique in being one of the only remaining historic music venues that’s family-owned and independent.

“All the big bands have passed through Cain’s, and many still choose to play there because it has a great feel and a great history,” Watson said. “So it just seemed like a good place to create a radio show.”

Live From Cain’s format is a variety show that’s very much a work in progress. The show’s main staples are the venue, Fulks and the house band, led by Tulsa-based musician Paul Benjaman. Each episode will host what Watson calls “cultural guests” from the world of music, art and film, interviewed by Fulks.

Music will naturally play a big role in Live From Cain’s, as was evident in the pilot episode, which featured four artists performing nine songs.

Fulks’ colorful music career, which spans more than 30 years, includes playing a key role in the 1990s alternative country scene alongside groups like Wilco, Son Volt and the Bottle Rockets. In the Live From Cain’s pilot, Fulks interviewed Texas-based country rock singer Bonnie Bishop and Los Angeles–based guitarist Kevin Odegaard, who is best known for playing lead guitar on Bob Dylan’s Blood on the Tracks. All of them, including Benjaman, performed songs for the show, sometimes together.

Apart from the music, Fulks brings a conversational, informal style to his hosting. He began the pilot by explaining the history of Cain’s. After bringing Bishop on for a few songs, Fulks asked her about how she developed her distinctly raspy singing voice that he was “totally envious of.”

“If you stay up late enough and don’t sleep and drink enough whiskey, you too can develop a rasp like this,” Bishop quipped.

Fulks previously hosted an interview and music program on SiriusXM for three years in the aughts. Watson, who had known Fulks from booking him for performances over the past decade, tapped him for the show. Fulks said he’s hoping his interviews with musicians will be grounded in their shared experience of recording and traveling for a living.

“That perspective, I hope, will bring a different color to it than if it was the weatherman from the Tulsa station coming down to talk to somebody,” he said.

As Live From Cain’s develops a format, the example of Live From Here and its predecessor, A Prairie Home Companion, lurks as the elephant in the room.

“That’s a template to draw from a little bit, but also to avoid,” Fulks said. “I think it’s a little bit like when Letterman or Conan would come on and have The Tonight Show with Johnny Carson hovering over the enterprise. It’s such a clear antecedent that you can’t escape it, but you’re looking for creative ways to play against it as well.”

The pilot didn’t feature any skits, but Fulks said he did a few improv songs with audience members that didn’t make the final cut. That type of “comedic and fresh” segment could play a role in future episodes, Fulks said.

The Live From Cain’s pilot was recorded in May, and the next seven episodes are planned to be recorded next year. Watson said the show’s personnel are still figuring out how many episodes will make up a season. For now, none of the show’s staff members is working for Live From Cain’s full-time. Content Editor Scott Gregory and Sound Engineer Scott Bell round out the staff apart from Watson, Burley, Fulks and Benjaman.

Live From Cain’s is also working with Denver-based public media consultant Mike Henry to bring the show to a national audience. Next year, the plan is to sell an eight-episode package to public media stations across the country. For now, three Oklahoma-based public radio stations have aired the pilot: KOSU, KGOU in Oklahoma City and KWGS in Tulsa.

KGOU has also committed to airing next year’s episodes. Program Director Jim Johnson said listeners responded with excitement when his station promoted the pilot with ads and an interview.

Johnson predicts that the house band will be among the show’s most unique features. That’s because Benjaman and the band will perform with Live From Cain’s musical guests and add the flavor of Tulsa’s music scene to their songs, Johnson said.

“That group of musicians is going to add something new and dynamic to whatever talent is the guest talent for the show,” Johnson said. “That, for me, is the thing I’m most excited about.”