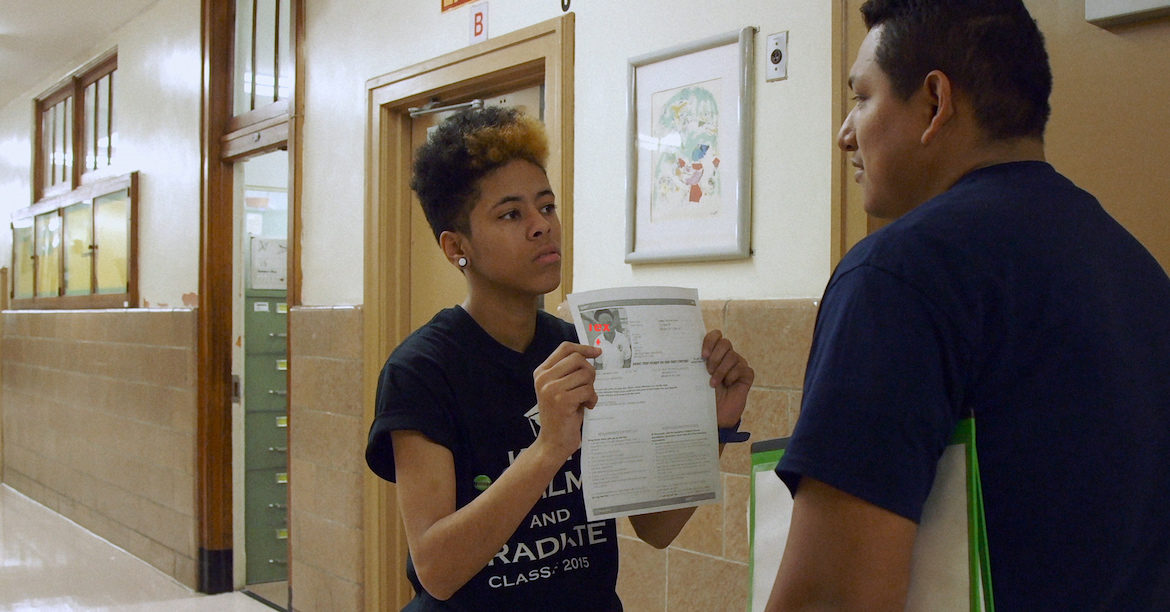 Karoline Jimenez, a high-school senior who participated in the Emmy-nominated film "Personal Statement," tries to track down a student to get him to take his SAT exam.

World Channel is expanding its role as a co-producer of the independent films it presents for public TV broadcasts and on the festival circuit.

The move to develop up to five co-productions annually is funded by a three-year, $600,000 MacArthur Foundation grant announced this summer. It enables World’s team to become involved in early-stage productions, providing support to filmmakers and putting World’s stamp on projects to boost the channel’s exposure, said EP Chris Hastings.

The grant is designed to build on the success of the documentary Personal Statement, which premiered in October on World’s weekly series America ReFramed. The film follows three seniors at Brooklyn high schools who act as guidance counselors to help get their classmates into college. World assembled partners to edit Personal Statement to PBS length, prepare it for broadcast and clinch a home video deal.

The Wyncote Foundation, another key funder of World, recently awarded a $150,000 grant to the channel, Hastings said. (Wyncote is also a supporter of Current.) That grant is to be split between marketing/engagement and content. Funds designated for content can be invested in co-productions.

“I’m shooting for four to five [co-productions] per year — so 15, overall. Possibly more,” Hastings said. He’s pinpointed a handful of titles for 2020, the first being Jaddoland, directed by Nadia Shihab and funded by the Center for Asian American Media. World just signed on as co-producer to present the film on America ReFramed.

In Jaddoland, Shihab visits her West Texas hometown to film her mother, an artist from Iraq whose work explores place, family history and identity. When Shihab’s grandfather arrives as an Iraqi refugee, she captures a deeper exploration of her family’s identity.

MacArthur is already a major funder of America ReFramed, which features domestic, long-form independent documentaries by and about people whose stories are rarely told on national television.

The co-production grant is MacArthur’s first to directly support World. Hastings said the funding speaks to World’s evolution as a public TV channel for young and ethnically diverse audiences.

Since joining World in 2011, Hastings has been reshaping its program strategy for this target audience. He’s overseen launches of four original series, including Stories from the Stage, Doc World and Local, USA. World’s carriage has increased 50% to 68 licensees, or 157 PBS stations, since 2010, when the revamp began. “It’s time to take it to the next level,” he said.

About 47% of World’s national audience is under age 50, according to Nielsen figures the channel provided.

The co-production grant isn’t limited to films presented on America ReFramed. Hastings is considering projects for Doc World and may commission half-hour programs for Local, USA. He also plans to solicit short-form videos for exclusive release on YouTube.

In preparing for the first slate of co-productions, World’s team has begun frequenting regional film festivals. In August, Hastings took pitches at the BlackStar Film Festival in Philadelphia. This fall, he plans stops at the Camden International Film Festival in Maine, the St. Louis Film Festival, the New Orleans Film Festival and the Hot Springs Documentary Film Festival in Arkansas, where Jaddoland is screening. He’ll also attend Doc NYC in November.

“I hope some films, when they go to festivals, will already be attached to World,” he said.

In securing the MacArthur grant, Hastings made the case that World could add value to independent films it presents by becoming involved earlier in the production process, Pabst said.

World’s relationship with WGBH was a key to securing the grant, Pabst said. “WGBH can bring the journalistic resources to bear, provide support, [help a project] build its team and capacity to work with a set of producers … in a big station,” she said.

World Channel, which launched as a multicast service in 2007, is owned and operated by the Boston station through a unique partnership with PBS, WNET in New York City, the National Educational Telecommunications Association and American Public Television, which distributes the multicast channel.

Latino Public Broadcasting, the CPB-funded consortium that develops and funds public TV programs by, for and about Latino communities, submitted the documentary to World for consideration in 2017.

In a typical scenario, World’s programmers would have decided whether to acquire rights to the film, Hastings said. But “there was something really unique” about the project, he said. World had already begun looking for filmmakers who were to open to a production deal rather than an acquisition, Hastings said.

With its focus on three students at a public high school who help their classmates plan paths to college or careers, the topic had a natural affinity with CPB’s American Graduate initiative promoting high-school graduation and workforce training. Hastings and his colleagues recognized its potential for public TV distribution beyond the stations that carry World, he said. “We wanted to get it out to the rest of the station world,” Hastings said.

But those aspirations required editing that filmmakers couldn’t afford. That’s where World jumped in to mobilize its partners.

Hastings said WNET’s Chasing the Dream initiative, which examines economic inequality, provided funds to cut the film from 90 minutes to 60. World and WGBH handled final packaging, while PBS Distribution arranged sales on Amazon and iTunes. The marketing exposure helped to elevate the film on the festival circuit. Stellar reviews, festival awards and an Emmy nomination followed. The filmmakers have appeared at 100 screenings across the country so far, Hastings said.

In the process, World and its partners figured out that marketing to support a film is also a way to market the channel, he said.

With World’s support, Personal Statement boosted its reach to 69% percent of households, a 5% increase from its usual reach through public TV multicasts.

“Personal Statement was a test case,” Hastings said. A goal for the co-production venture is to expand distribution and reach of World’s documentaries beyond its multicast partners.

The first year of the MacArthur grant will be “building up our capacity, making sure we are getting films, [getting] ahead of the market and working with partners,” including American Documentary, producers of the independent film showcase POV and co-producer of America ReFramed, Hastings said. World will hire an editorial producer to help manage co-productions and lead efforts to build deeper relationships with independent content creators, he said.