There’s no simple explanation of why some states have statewide public radio networks while others don’t. But a look at where networks have taken root does suggest a few key factors.

We dove into this topic after receiving reader Kelley Libby’s submission to our Currently Curious series, in which we answer questions posed by our audience. Libby, an associate producer with the Virginia-based public radio show With Good Reason, wanted to know: “Why doesn’t Virginia have a statewide public radio network? Which states do, and why?”

Even without a network, Virginia’s residents are well-served by public radio. The five licensees with the most coverage each operate multiple stations. 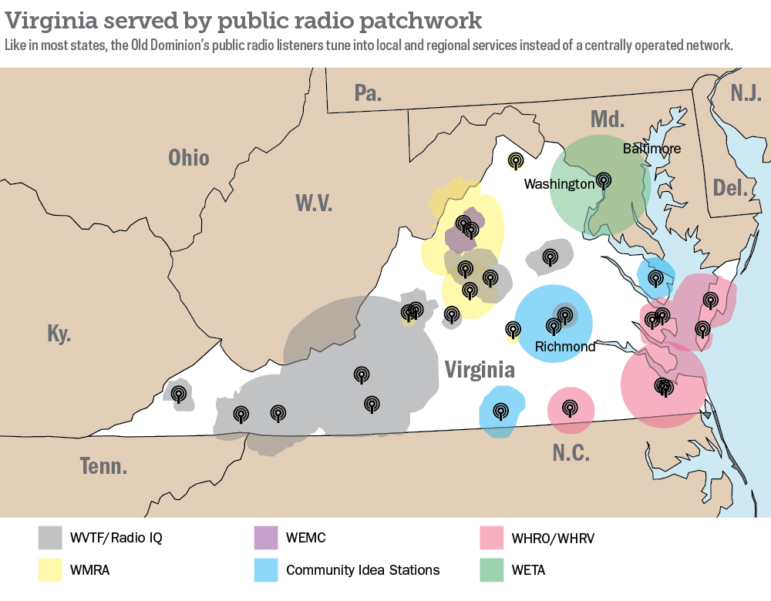 WVTF/RadioIQ, based in Roanoke, has grown into Virginia’s network with the widest reach and largest audience. Stations broadcasting the Radio IQ news service stretch from the state’s southwestern tip to Fredericksburg in the northeast, covering a population of more than 2 million Virginians, according to the consultancy Public Media Co. The broadcaster’s music stations reach a potential audience of 765,000.

Other Virginia stations covering populations of more than 1 million include Commonwealth Public Broadcasting’s Community Idea Stations, based in Richmond, and WHRO and WHRV in eastern Virginia’s Hampton Roads. Harrisonburg’s WMRA and WEMC, licensed to James Madison University, reach smaller audiences. And listeners in the Washington, D.C., suburbs can tune to the city’s stations as well as WETA-FM, based in Arlington, Va.

Several of these stations signed on around the same time and relatively late in the development of radio as a medium. That appears to be one factor that stifled the formation of a statewide network.

WMRA began broadcasting in 1969. WVWR, later WVTF, signed on in 1973 — the same year as WTGM, which became WHRV. Meanwhile, in Wisconsin, South Dakota and Oregon — all states that now have statewide networks — the first station in each network signed on before 1935.

In Virginia, “the notion of a statewide network was never in any single entity’s mind when they were creating their presences,” said Matt Bingay, executive director of WMRA. Bingay has worked at the station since 1992, save for a yearlong stint at New Hampshire Public Radio.

Instead, Bingay said, “we were like little seeds being planted” in different communities — “We all grew up independently and small.” Western Virginia’s mountainous landscape also hindered connections between stations as they developed, he said.

Developing a statewide network in Virginia has “never really been a topic, because I think we all realize that we serve our regions well by sharing content when appropriate,” said WHRO CEO Bert Schmidt, who has worked in Virginia public media for 16 years. “We need to be able to program in our regions based on what our local needs are.”

Another contributing factor may be Virginia’s lack of a public TV network. In several states, statewide television networks “provided the venue for being able to build up the radio networks,” said Skip Hinton, former president of the National Educational Telecommunications Association.

Adding a radio network to a TV network was an “easier task than to build out radio in individual communities because you could do it in a centralized fashion,” Hinton said. In South Dakota, TV network towers were built to accommodate a future statewide radio network, according to South Dakota Public Broadcasting.

A state’s support for public broadcasting also appears to be related to whether the state has a public radio network. In 13 of the 18 states with networks, the state gives direct funding to public broadcasting. And in at least seven of those states, state funding has made up more than a third of the network’s budget in recent fiscal years. Both South Dakota Public Broadcasting and Mississippi Public Broadcasting receive more than half of their funding from their states.

Virginia ended direct funding for public radio stations in 2011. The following year, it eliminated funds for all public media.

A statewide network in Virginia “would be particularly challenging since the state doesn’t put any money into it,” Hinton said. “How could the state argue to do that when they’re not helping support it?”

Network a bad fit for Virginia?

In states that do have statewide public radio networks, executives at those broadcasters say the centralized structure allows for service that wouldn’t be possible otherwise. Meanwhile, Virginia’s separately operated stations have gotten by as standalone outlets.

“Chances are, if we were not a single administrative network, public radio and television would probably exist in 30 percent of the geography as opposed to all of it,” Rohrer said. “The fact that we’re a network makes it possible to serve a fair part of South Dakota.”

“A statewide network wouldn’t serve, frankly, anybody as well as what we’re doing today — which is sharing content and providing regional content.” — Bert Schmidt, CEO, WHRO

Kelley Libby told us that she wondered whether Virginia’s lack of a network was hampering public radio’s ability to connect listeners across the Commonwealth. Station leaders, however, see upsides to the lack of central control.

A statewide network would be a “huge mistake” for Virginia, WHRO’s Schmidt said, because stations would lose the ability to program to their audiences. That would be a drawback in a state where issues vary depending on the region. Residents in WHRO’s area have witnessed rising sea levels, and the station is focusing on environmental topics. But audiences farther west may have other priorities.

“You would have someone trying to program for everybody within the same state,” Schmidt said. “The folks in the far western part of Virginia certainly have a different need than the folks in Alexandria [in D.C.’s suburbs]. A statewide network wouldn’t serve, frankly, anybody as well as what we’re doing today — which is sharing content and providing regional content.”

Richmond’s Community Ideas Stations has always focused on serving Richmond listeners. It does occasionally send reporters farther afield, WCVE Radio GM Bill Miller said, “but our focus really is on providing the best service we can for the Richmond market.”

Statewide networks should “happen in terms of need and interest, [rather] than … to say that a network is what’s required,” Miller said. “An informal network may provide a comparable service to having an organized statewide network.”

We shared the results of our reporting with Libby, who asked our question. Virginia’s lack of direct funding for public broadcasting was “the most interesting part of this,” she said. “It makes me feel like there should be a coalition of people who advocate at the Virginia General Assembly for public media funding, and what would that look like?”

As for the arguments that a network could harm stations’ local news coverage, Libby asks, “Can you target audiences in your area but still have a statewide network?” Though stations in Virginia do share content, Libby said it consists mainly of pieces from several reporters within a division of WVTF.

As an example of the kind of content-sharing she envisions, Libby points to the Virginia Mercury, a nonprofit news website that launched this year to cover state government and policy. In addition to its own reporting, the site rounds up news from publications across the state. “Certain things are relevant to me, even if I don’t live in that part of the state,” she said.

“I just wonder if it would be beneficial for us to have a medium that puts people in conversation with each other,” Libby said.

21 thoughts on “Money and history: Why some states lack public radio networks”