Public radio’s Live from Here is taking another step away from its roots as a Garrison Keillor production, with several longtime musicians and actors leaving as the show prepares for its upcoming season.

Actors Tim Russell and Fred Newman and keyboardist/music director Richard Dworsky are leaving the show, according to a Tuesday press release.

“I stand in awe and will be forever grateful to these extraordinary gentlemen,” said host Chris Thile in the release. “Their artistry, individually and collectively, is an essential, immortal part of America’s sonic landscape. As we stay curious about what’s next, we’re mindful of and thankful for all the brilliant people that have helped make this show what it is today.” 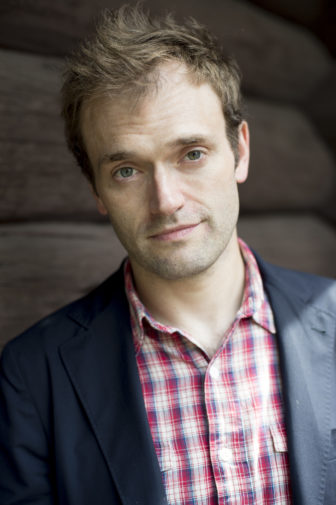 The changes aim to provide “an even better experience for live and radio listeners to Live from Here,” according to the release. The show’s audience of 25- to 34-year-olds was 22 percent higher in an average of spring and fall 2017 audience data compared to fall 2016 data, according to American Public Media, which produces the show.

Live from Here’s new musical director will be Mike Elizondo, a musician and producer who collaborated for 11 years with hip-hop producer Dr. Dre and co-wrote Eminem’s “The Real Slim Shady.”

Serena Brook, who started acting on the show two years ago, will take over as announcer and will continue acting.

“I’m beyond excited about the team we have this year,” Thile said. “This show is a joy to make and I feel like that joy gets a little more infectious every week. The new mix of talent further energizes our celebration of hearable beauty and hilarity. We can’t wait to get in front of your ears this fall.”

The new season of Live from Here begins with a live show Oct. 5, to be broadcast the following weekend.

Dworsky will perform with Garrison Keillor in Minneapolis at a sold-out live show in November, according to the Star Tribune. Keillor retired as host of APHC in 2016. American Public Media, which produced APHC and produces its successor, cut ties with Keillor last year after allegations of “inappropriate behavior” by the host.

Keillor is also speaking next month in Vermont. A print ad for the event featured the logos of Mountain Lake PBS and North Country Public Radio, which also appeared on an online event page.

Update: The station logos that appeared on the online ad for Keillor’s appearance in Vermont have been removed by request of the stations. 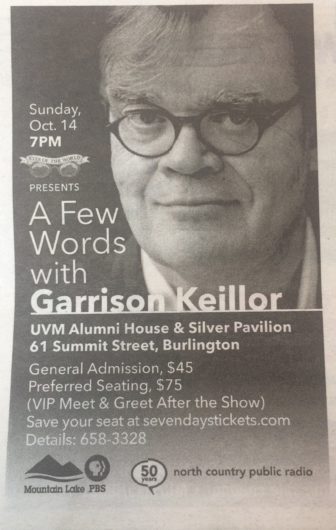 An ad in the Burlington, Vt., paper Seven Days promoting the Keillor appearance.

“We were shocked to see our logo on that page,” said Jackie Sauter, director of broadcast and digital content at NCPR. “We had not agreed to be a partner or promote that event in any way.”

“Given Mr. Keillor’s problematic relationship with public media recently, we would have never, in any case, agreed to sign on to promote that event or be affiliated with that event,” she said.

She added that NCPR policy prevents the station from sponsoring “any event that’s a benefit for any other organization, no matter how worthy the cause.”

Sauter said the logo appeared on the web page and in a print advertisement due to a “misunderstanding” with the Burlington Book Festival. Keillor’s appearance is a benefit for the festival, which is promoting it. NCPR signed up to sponsor the festival before Keillor’s appearance was announced, Sauter said. “We would not have signed on as media sponsor if he had been listed,” she said.

Mountain Lake PBS has been a media sponsor for “several years” for the festival, according to CEO Bill McColgan. “However, we did not have an agreement to promote this particular fundraising event featuring Mr. Keillor, and we have asked organizers to remove our logo from the event,” McColgan said.

This post has also been updated to include details about Live from Here’s audience growth.